Lynn Johnston mentors student on the art of the comic strip

Cartoonist took time to show Evan Panton some of the ‘tricks of the trade’ in session
Jul 13, 2018 8:36 AM By: Maria Spitale-Leisk 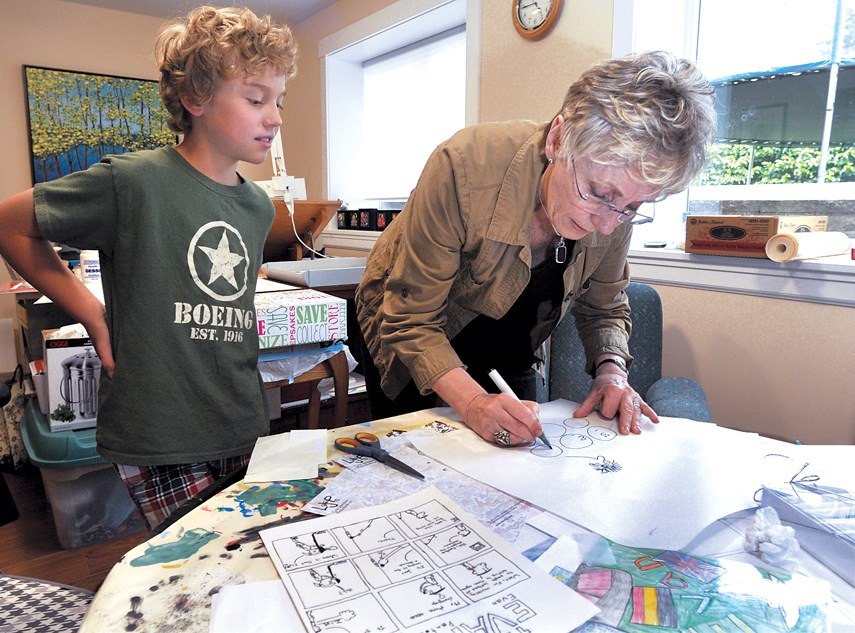 Copying from others is a way to learn when you are starting out, Lynn Johnston tells budding cartoonist Evan Panton in a private lesson.Paul McGrath, North Shore News

A message on the page of this newspaper jumped out at the famous cartoonist.

Lynn Johnston has “produced one of the best comic strips ever,” gushed Evan Panton, the Cleveland Elementary kid with a penchant for the classic funnies, including For Better or For Worse.

Well, that flattery was enough to prompt Johnston to pay it forward by offering Panton private cartooning lessons. To say the budding artist was thrilled would be an understatement.

On the first day of summer break Panton turned up at Johnston’s studio in the Keith-Lynn area for his cartoon class. A familiar character, Farley the sheepdog, is laying about the studio, which is decorated with an easel and portraits of friendly cartoon animals.

Johnston wants her young student to see that there is no “secret sauce” to being a cartoonist.

“It’s no mystery – it’s all brushes and paints and pencils,” she says.

However, Johnston does have a basket of tricks: a selection of miniature die-cast and plastic toys. There’s a yellow school bus, a piano keyboard, a horse and a FedEx truck – to name five tangible objects Johnston can closely examine and scale up to suit the scene of her comic strip.

Photos don’t offer enough detail for Johnston, who knows even the smallest line she draws can change the face of a cartoon. Johnston’s hand reaches in the basket to grab a toy car. She turns it over, exposing the underbelly of the machine.

“If you’re drawing a car flipped over in a ditch, there it is,” says Johnston.

The cardinal rule of cartooning is to write the script first – “even though it’s not as much fun” as drawing, attests Johnston.

Imagine you are writing a play, she advises Panton.

“Divide it up in your head into four statements, and that way you’ll have a beginning, middle and an end. By drawing the cartoon first you tend to get ahead of yourself and you have to try and fit the writing in.”

Background elements of the cartoon that set the location are equally as important as the characters – that’s also part of the discipline of being a cartoonist.

“But the trouble is it’s so much fun to just draw the characters because there’s a spirit in you that is the character,” says Johnston. “If you are drawing a dog, you breathe life into the dog. Each character is you.”

Timing is key when trying to land a joke. There’s an art in fooling the audience until the very last frame.

“And they were really into it,” recalls Johnston.

She was intrigued by how impassioned they were talking about these materials and says the men could have easily been talking about a Ferrari or a rocket ship.

“And what they were talking about was their walkers,” says Johnston, with a laugh.

Panton pulls out his portfolio that’s a mix of original and emulated drawings. He shows Johnston copies of cartoons that he has made.

The master compliments her young mentee on his technique.

“That’s right on model,” she tells him. “It means it looks exactly like the character is supposed to look.”

Johnston pulls back the veil on her process and shows Panton some more cartoon magic. She brings a simple face that she’s drawn on layered strips of vellum paper to life to by moving the pieces around. Dotted eyes dart around the circle as she plays with the expression of the face.

The art of cartooning with the legendary Lynn Johnston. #forbetterorforworse

Panton’s own eyes widen as Johnston casually mentions she would watch Charles Schulz work on the Peanuts cartoon in his studio. Johnston went on to form a friendship with Schulz and the pair remained close until his passing.

In the back of his mind while poring over the Patterson family, Panton always wondered something.

“Is there a reason you decided to age the characters?” he asks Johnston.

“I did that because I got bored with things being young – all the same all the time,” explains Johnston. “I also had kids who were growing up and the older they got the more interesting and the funnier they were.”

When For Better or for Worse shot to popularity, Johnston’s real-life children struggled with that fame.

They knew her as mom but also as her alter ego Lynn Johnston, who would often get stopped in public for an autograph.

“Another good thing about producing a baby (April) for the strip is that my own kids in real life … they weren’t really happy about being featured in a comic strip, and they were teased at school,” reveals Johnston.

As Panton’s lesson winds to a close, Johnston brings him over to her easel. She is currently working for a company in New York on some artwork that stars Farley the dog. They are looking to market dog beds using Farley’s likeness.

While Johnston is retired, her comics are still in circulation and the strip is being rerun from the beginning, currently appearing in approximately 1,500 newspapers worldwide. She has earned many accolades over the years, including the Order of Canada and a star on Canada’s Walk of Fame.

Johnston also has many fans south of the border. The beloved cartoonist is currently on her way to Southern California, where she’s scheduled to be a speaker at Comic-Con in San Diego, July 19-22. Considered one of the largest comic conventions in North America, past events have drawn more than 130,000 people.

Johnston has some parting words for Panton, whom she wants to work with again.

“I think you’ve got what it takes to keep on going with this,” she says. “There’s no magic to doing what we do – it’s just lots of hard work and practise.”