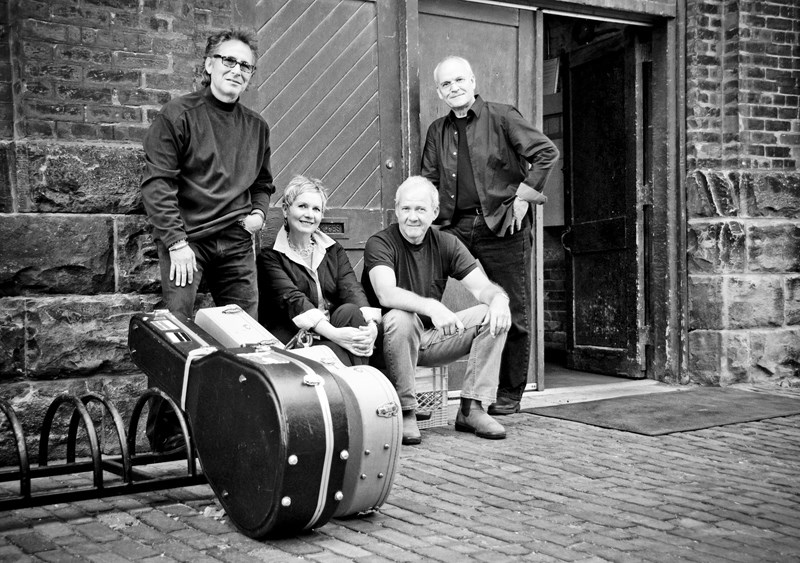 Looking over the crowd at a Nova Scotia night spot it must have seemed – just for a moment – that this would be the stage where the rock stopped rolling and the moss finally gathered.

Singer/songwriter Ian Thomas recalls seeing an audience topped with a “sea of white hair.” For the band, the sight was akin to the ticking crocodile that stalked Captain Hook: it was a reminder their days were numbered.

Turning to a bandmate, Thomas remembers saying: “Jesus, I think we’ve got a couple of years left doing this. I think our audience will be dead.”

But much like Bob Dylan, Lunch At Allen’s took a long time to get young. As the quartet readies to tour in support of their fifth album, If It Feels Right, Thomas estimates their fans now fall into that meaty demographic between 30 and 80.

But if it took the audience a long time to find the band, it took the band much longer to find each other.

They were all singers and songwriters, singing some songs that became hits and writing a few more that became bigger hits for singers with bigger names. But in the 1990s, after 30 years of playing every postal code he could find, McLauchlan needed a break.

Thomas recalls being reduced to “studio dweeb” status in the early 2000s when McLauchlan called.

Thomas was godparent to McLauchlan’s son, but that didn’t mean the “Farmer’s Song” singer would be willing to take no for an answer.

“He basically wanted to drag my ass kicking and screaming out the studio and start treading the boards again,” Thomas laughs, speaking to the North Shore News from his studio in Dundas, Ont.

It didn’t take much drag or thrust, and the duo quickly recruited Marc Jordan who – in a 40-year career – is likely best known for penning the Rod Stewart tune “Rhythm of My Heart.”

The idea of the three of them “made us all giggle,” Thomas recalls. But, as with doubles tennis or moving a grand piano, they needed four.

“Even though she didn’t have a track record of radio hits or anything like that, she’d stand up against anybody,” Thomas recalls deciding. “I mentioned her name to Murray and he went, ‘Well, duh.’”

With the pieces assembled they met for lunch at Toronto scotch bar Allen’s (A-ha!) and eventually booking an eight-date tour through Ontario.

“Here we are, 15 years later, crossing the country,” Thomas marvels.

Solo albums – of which Thomas has released 11 – are usually a neurotic experience, he explains. But working with Lunch At Allen’s is collaborative, he says. “We get together and kick it around till it feels good.”

For If It Feels Right, the band recorded the bed tracks in Toronto before moving to Thomas’ house to finish it off.

Aside from a jazz-influenced rhythm parts, the new record saunters between rolling tumbleweeds and mighty winds. “Sweet Agony,” Church’s paean to pain, and the uproarious “Aye Diddleigh Aye” stand up as the album’s strongest tracks.

The band members generally write songs alone and bring them to the group where, as Thomas puts it, “We Lunch At Allen’s it.”

That means harmonies. On the new album’s first track, “Where the Sweet Waters Flow,” Thomas says Church grabbed the top, he took the middle, and Jordan threw some bass part in at the bottom while McLauchlan sang lead.
It rounds out the tune, but there’s something in that approach or in the blend of the voices that gives the song what Thomas calls a “heart centre.”

“If I had wanted to pick four singers and put them in a room and hope for a blend it certainly wouldn’t have been us four. But it works,” he adds with a laugh.

Asked about the supergroup label that’s been applied to the group, Thomas paraphrases the Canadian humourist Dave Broadfoot: “You get one hit in the United States, you need security and an entourage for the rest of your life. You can have a dozen in Canada and you’ll still need a f?!#g name tag.”

There’s truth to that, Thomas says.

They’ve done star turns, backing up famous bands and sharing the stage with famous singers, but the group isn’t trying to cash in on icon status or market themselves as the living  soundtrack of a generation.

“We’re not trying to be anything we aren’t,” he says.

Asked why people should see Lunch At Allen’s in person, Thomas gives it a little thought before answering.