Living in HOpe charts highs and lows of mental health 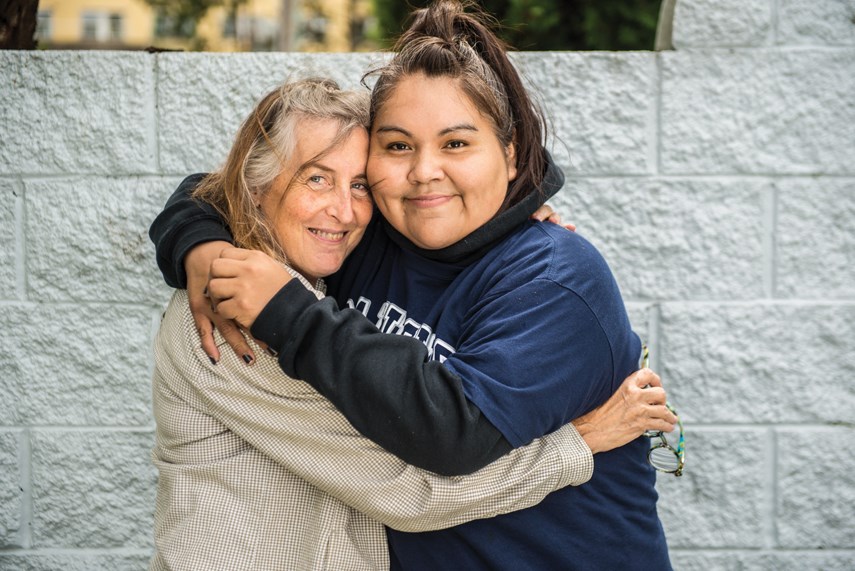 Melanie Wood (left with Blair) filmed Living in HOpe over a full year at the HOpe Centre in North Vancouver, following patients and healthcare providers as they worked together on a human approach to mental health.Supplied

His sentences were full of what seemed like word salad and stray thoughts.

Filmmaker Melanie Wood admits she was unsure of what to make of the man, Ross, when she initially encountered him. His behaviour might have appeared unpredictable to some.

But now, more than a year later, Wood says it’s other people’s attitudes surrounding mental illness that could benefit from less predictability.

“I walked in with my little preconceived notions of what it was to be mentally ill. He’s the kind of person you’re ‘warned’ about you know,” she says, before adding that when she got to know Ross she realized he was what many appear to be upon closer inspection: wonderful. “It turns out … he’s not scary.”

It’s revelations like this, and more importantly the notion of treating “people as just people,” that are littered throughout Wood’s new four-part documentary film series, Living in HOpe, set to premiere on the Knowledge Network and online starting Nov. 6.

Living in HOpe-Trailer from Stranger Productions on Vimeo.

During the course of a year Wood and her camera crew followed the lives and stories of patients and healthcare providers at the 150,000-square-foot, four-storey building that provides inpatient and outpatient psychiatric care.

“I think we could all use a little more compassion. For me, I learned a lot about myself and how I view the world and I think every time we can try and understand something from someone else’s point of view, we’re better placed in our community,” says Wood.

In the wake of myriad campaigns that talk about the virtues of self-care and well-being as a way to maintain one’s mental health, Wood argues that for some people mental illness is just a fact of life whether they engage in self-care or not. They too deserve to be given the time of day, says Wood.

“Everyone’s talking about mental health and mental wellness, and I really like that positive aspect,” she says. “On the other hand, face it – some people are really ill. If we don’t want to use the word, then we’re kind of implying that they can’t get any better.”

In four episodes, the documentary series charts the highs and lows experienced by the patients, families and healthcare professionals at the HOpe Centre. Some patients struggle to cope with their illness, others find a way to make it work, and sometimes those in the throes of severe mental illness get better, or at least start to be able to manage what they’re going through.

“What I loved about the whole process is that I’d go in and I’d meet someone and I’d make an assumption about them and over the course of time getting to know them I got to know who they really were inside and could really see past the barriers that they have to deal with all the time,” says Wood.

She explains that she had to get consent from HOpe Centre patients in order to use their stories for the series and how it was important to honestly and fairly share those stories with the public.

One woman, Blair, who we meet right off the bat in the first episode and who appears in a distressed state initially, finds closure by the series end.

“After watching all her parts she said, ‘I need my mom to see this because I want her to know how I feel about what goes on inside me,’” explains Wood. “That’s what I want to do, is help them tell their story.”

Telling people’s stories and providing a real-life look at what happens around us has been a preoccupation of Wood’s for decades.

The North Shore-born filmmaker grew up in West Vancouver and studied communication studies at Simon Fraser University. She learned about filmmaking after landing a job at CBC where she worked on various news and current affairs programs before venturing out on her own year’s later.

Her documentary, A Stranger In Our Home, about the alarming rise of internet sexual predators was a revelation when it was released – almost 20 years ago. “In 1999, nobody was thinking about that,” she says.

A more recent project, For Dear Life, a documentary that deals with death and dying and one man’s final wish, was produced by Wood last year.

And while For Dear Life and Living in HOpe might both delve into issues related to health care, Wood has never fully seen them that way.

“I don’t think of either as health care films,” she says. “I guess what interests me is trying to tell stories around the discussions that we don’t like to have. Death is certainly one of them – and mental health is another one.”