Johansson gets metaphysical in Lucy 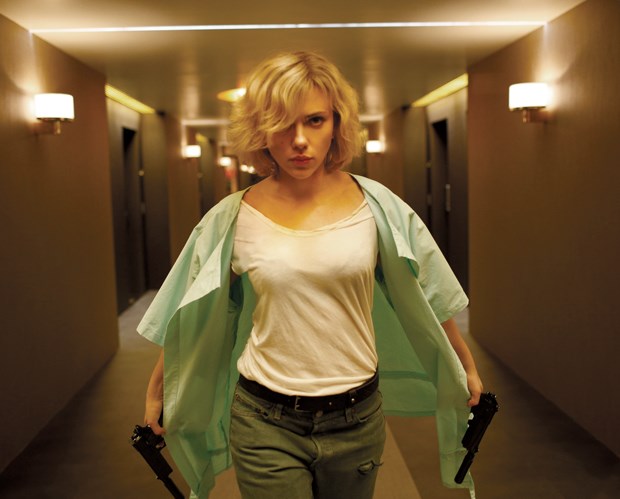 What is it with Scarlett Johansson's body-morphing roles of late?

In her last film, Under the Skin, she played an alien birthed into human form who then sets out to seduce and destroy. In Her, she was an operating system with no human form at all. And in Lucy, she plays a woman whose cellular makeup goes violently haywire, giving her extraordinary physical, sensory and intellectual powers.

She's still using that trademark sex appeal, but increasingly it's used as a means to feed her characters' need for knowledge and revenge. Director Luc Besson is the king of kick-butt female action roles: Leeloo in The Fifth Element; a 12-year-old assassin's apprentice in Leon: The Professional; and spy/ assassin La Femme Nikita.

He has created another reluctant heroine in Lucy (Johansson), an American student living in Taiwan who is talked into delivering a package to a Korean businessman. What begins as a cautionary tale about bad boyfriend choices becomes a hellish scenario: Mr. Jung (Choi Min-sik, Oldboy) is a druglord using human mules to transport his product throughout Europe. Somehow the fact that he washes his bloody hands with Evian water makes him extra bad.

A tense and terrifying hotel room scene is followed by a tense and terrifying captivity scene, where Lucy is beaten so badly that the drugs she's carrying seep into her system, in a cell-splitting sequence that is at once gruesome and beautiful. Cue Professor Norman (Morgan Freeman), giving us an evolutionary lesson about how most animals use from three to five per cent of their brains, and humans roughly 10 per cent. Lucy is accessing more of her brain by the minute, unlocking powers humans have only dreamed of. She is determined to bring down Jung before the synthetic drugs carried by other human mules hit the streets, and her time may be running out.

It's a risky move, disturbing the pace of the action only to be schooled on the science at hand or for flashbacks to early humanity - and to Australopithecus, the first female, who was also called Lucy - but it turns out to be a welcome respite from all that intensity and squishy stomach-incision noises.

Johansson becomes a little robotic after a while but we learn the storyline demands it. "It's like all things that make us human are fading away," she says. The body count piles up: after shooting an anesthetized patient Lucy tells the doctors in the operating room that he would've died anyway, a stroke of luck for whatever morals she has left. Not so lucky are all those car-crash victims on the streets of Paris.

Things get a little trippy around 80 per cent, when Lucy tells us that "one plus one has never equaled two," and the science goes off on a tangent sure to frighten most English majors.

I know what you're thinking, but this is no Limitless (Bradley Cooper). As the cells multiply and Lucy taps into more and more of her brain, it's new thrills-new skills with each passing hour. It's taut at 90 minutes and Besson doesn't overstate his point. Aided by Johansson's star power and with just the right mix of sci-fi, intense action and metaphysical musings, he's delivered a revelatory spin on the genre.