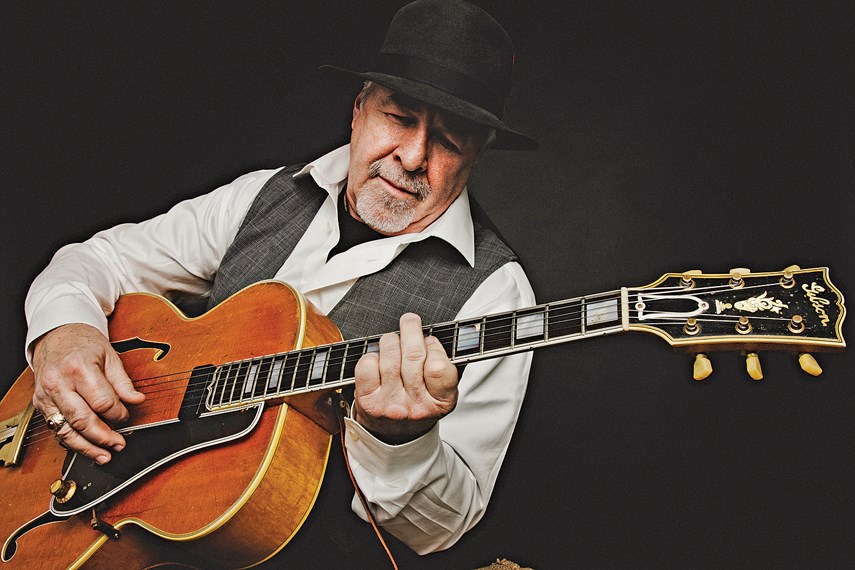 “We love old blues,” he says of himself and his producer Steve Dawson. “But I don’t want our records to be like a museum piece.”

You can almost imagine Byrnes breaking into the Library of Congress to liberate Blind Lemon Jefferson and Mamie Smith records like an environmentalist releasing captive birds into the wild.

His newest album, Long Hot Summer Days, opens with a cover of Jesse Winchester’s 1976 gospel-tinged inquiry into Satan’s relative cheerfulness, “Step by Step.” At the end of each verse Winchester asked: “How come the devil smiles?”

Byrnes asks the question with a different inflection, turning the folky blues song into a soul music celebration.

“A trillion voices sing the name that mortals may not know, and Heaven’s walls are too high to hear the troubles down below,” Byrnes sings as a horn section blares and the backup vocalists harmonize.

Byrnes’ version feel less like a lament on God’s silence and more like a Muscle Shoals party band stricken with a religious quandary.

Discussing the album before its 2017 release, Byrnes promised a mix of “flat-out blues” and country soul harkening back to the soulful sounds of Arthur Alexander, James Carr and Percy Sledge.

Dawson chose to record the newest Byrnes album “Sinatra-style,” with all the musicians in the same room at the same time and without headphones, according to a release from Black Hen music.

The technique helps the album feel like the work of a cohesive band rather than a singer and some hired hands.

Despite describing himself as an “old-age pensioner,” Byrnes seems to measure time in music, noting his relationship with Dawson goes back seven albums.

Recording the 2004 album Fresh Horses, which features slow, tumbleweed-infused blues like “12 Questions” and “Love is Just a Gamble,” seemed to rejuvenate Byrnes.

“I had such a good time,” Byrnes recalls. “The performing had started to feel like a job, which is terrible,” he adds with a laugh.

But if playing some gigs is a job, singing at Deep Cove Shaw Theatre is a delight for Byrnes, who helped raise money for the venue in the 1990s.

“I love theatre. I got my start in theatre,” Byrnes says, referring to his history as an actor.

That cosy setup that allows for stories and shared moments that aren’t possible in an arena, he notes. If he plays a Waylon Jennings song, for instance, he might regale the crowd with the story of how just how close Jennings came to being on Buddy Holly’s doomed plane on the day the music died. Byrnes is set to be joined by singer Babe Gurr, saxophonist and keyboardist Steve Hilliam, as well as guitarist and singer Adam Popowitz.

Byrnes is planning to play some tracks from the Long Hot Summer Days as well as a few of the other tunes that have caught his ear during the last 50 years.

The crowd for Byrnes’ shows tends to range between folks who have seen every episode Highlander and Wise Guy to the music fans who “have no idea,” he says.

While Byrnes’ singing technique may be more refined, there still seems to be as much raw passion behind his voice as ever. It’s what makes “Step by Step” such an appropriate track.

Heaven’s walls may be too high to hear, but Byrnes is still singing about all the troubles down below.