Jessica Lucas finds her niche behind the scenes

Actor doubling as executive producer on new series The Murders
Mar 22, 2019 9:38 AM By: Julie Crawford 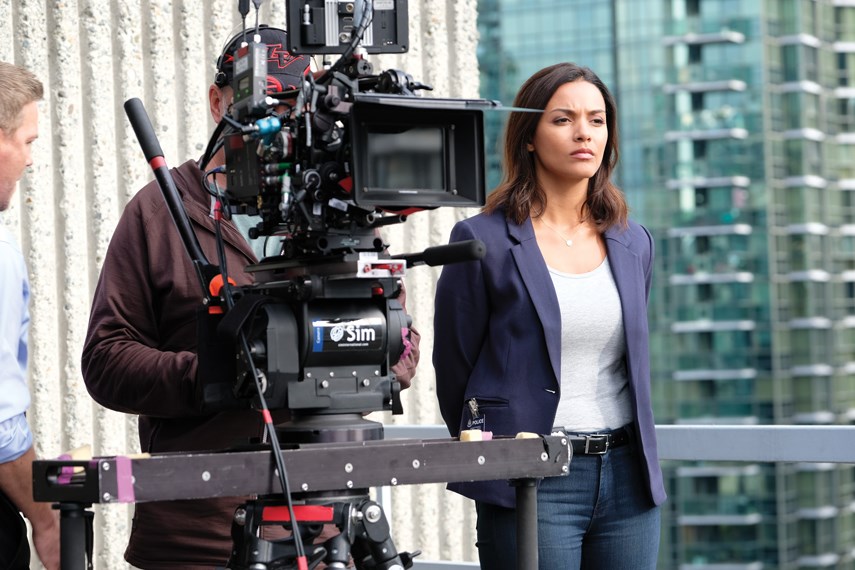 Jessica Lucas stars as rookie homicide detective Kate Jameson in The Murders, a crime drama set on the streets of Vancouver, which premieres Monday, March 25 on CityTV.Supplied

If growing up in Hollywood North isn’t temptation enough to get into the movie business, growing up behind North Shore Studios certainly is.

That’s how it happened for North Vancouverite Jessica Lucas, who spent her childhood looking onto the studio that churned out The X-Files, the Twilight and 50 Shades films, Deadpool, Jumanji and, yes, Ernest Rides Again.

Lucas first took to the stage at age seven, in between soccer, softball, singing lessons, dance classes, and clarinet and piano lessons. “I was pretty busy!” she laughs. “But I certainly knew by the time I was a teenager that acting was something I wanted to pursue.”

Lucas’ mom took her to “any and every production that came into town,” she says, and the family was always at the movies. Even still, it was “a bit of a surprise” when the Sutherland grad told her parents that she had decided not to go to college and that she was chasing down her acting dream full-time. “They thought it was more of a hobby,” she admits, “but I’m lucky: they’ve always been really supportive.”

Guest- and series-regular roles on The L-Word, Life As We Know It, Edgemont and CSI followed. Lucas was on the reboot of 90210 and landed a leading role as Riley Richmond on the revamped Melrose Place on the CW network. The actor worked on feature films The Covenant, Cloverfield, That Awkward Moment and Evil Dead.

Then, after years of living in New York and ending a successful four-season run as villainess Tabitha in Gotham, she had the chance to return to her hometown. Lucas stars as rookie homicide detective Kate Jameson in The Murders, a crime drama set on the streets of Vancouver, which premieres Monday, March 25 on CityTV.

“I was looking for something more challenging, more character-driven, and the show fell in my lap,” she says. “Damon (Vignale) pitched me the idea, and I fell in love with the character.” Lucas is also an executive producer on the show. “It’s a natural next step for me, I think. I’ve always wanted to be part of the larger conversation that goes on behind the scenes, but I didn’t know how to make that happen... Turns out all I need to do was ask.”

Kate Jameson is looking to make a big impression in Homicide and to live down the accusations of nepotism thanks to her late father, a legend on the police force. But things go wrong from the very first day on the job when the hunt for a killer leads to an accidental shooting. The eight-part series also stars Lochlyn Munro (Riverdale) as Kate’s mentor, Dylan Bruce (Orphan Black) as her reluctant partner, Terry Chen (The Expanse) and Luvia Petersen (Ghost Wars).

Lucas was used to handling a firearm from her Gotham days, but she did meet with police consultants who came on set and put the actors through the basics, like how to put on handcuffs convincingly and how to hold their weapons. “I wanted to make sure I looked like I knew what I was doing, but I didn’t do too much research,” she says, “I like diving right in rather than intellectualizing a role.”

Vancouverites accustomed to seeing the city stand in for Seattle, San Francisco, New York and even Pyongyang, Moscow and Iowa – go figure – should be thrilled that The Murders is the most unabashedly local show to hit small screens in a while, complete with real street names and locations such as Jericho Beach. “I do love that this show appreciates and showcases Vancouver, that’s exciting,” Lucas says. “The city feels like its own character.”

She was thrilled to be back in her native city, living downtown, as well as being 10 minutes away from family. The only negative was the rain, of course: “The rain gets in the way a lot. There were definitely some cold and rainy days shooting.”

In between Gotham and The Murders Lucas got married, honeymooned in Greece and settled back home in Los Angeles for the first time in four years. “I’m taking some much-needed time for myself.”

She insists she doesn’t have a grand plan but it’s unlikely Lucas will sit still for long. Her dream project? “I would love to do a musical, and I would love to be on Broadway,” she says.

“I’m just really excited about the direction of the industry: everything is so niche. For actors like me there are so many opportunities to branch out and create more content,” Lucas says. “So when I see people my age getting into it, that is really exciting.”