In Passing faces death and other secrets 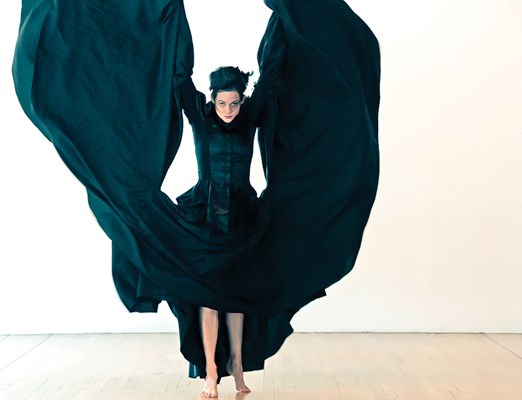 - Astrolabe Musik Theatre with Heritage Vancouver, Tara Cheyenne Performance and photo-based artist SD Holman present the Vancouver premiere of In Passing, a site-specific, multi-disciplinary work on the taboo subjects of mourning and mortality at the Western Front, Nov. 12 and 13 at 8 p.m. as part of the City of Vancouver's 125 anniversary celebrations.

THE procession appraises a stone angel before leaving the cemetery and marching to Hamilton Harron Funeral Home under the coalcoloured sky.

They expect to see a coffin, but in its place sits a grand piano, and inside that piano, hidden from view, lies a woman.

She sings. The music ceases for a moment, ringing off the urns that line the room's shelves. Then, as though it were the climax of some zombie opera, the soprano bounds from her Steinway tomb and finishes the concert.

It's an unusual performance, but Heather Pawsey, the founder of Astrolabe Musik Theatre and the owner of that lyrical soprano, is a champion of the unusual.

Pawsey has performed in concert halls, theatres, an aquarium, a winery and a mining museum, but says she never saw an audience response quite like the one that followed her first musical examination of death, DEAD Serious.

She handed out black paper and white pens and asked for constructive criticism after the 2008 performance.

"Some people still wrote comments, but many people made art," she says, recalling the doves, tombstones, and faces of departed loved ones drawn on the paper.

She also recalls a peculiar exchange regarding who could be admitted to the next performance:

"Can I bring my uncle to the concert?" a fan asked.

"Of course you can bring your uncle to the concert," she replied.

After a brief pause, Pawsey says the caller added: "He loved music."

The notion that an opera aficionado wanted to share the night's experience with the remains of a family member has stayed with Pawsey.

DEAD Serious eventually evolved into In Passing, a singing, dancing, photographic and poetic exploration of death being staged as part of Vancouver's 125th anniversary.

The show, which features contributions from Tara Cheyenne Performance, the Vancouver Heritage Society and photographer S.D. Holman, is scheduled to come to life Nov. 12 and 13 at the Western Front on East 8th Avenue near Sophia Street.

Today, the Western Front is a haven for artists from around the world, but in 1922 it was the property of the Knights of Pythias, a secret, fraternal society that counted U.S. President Franklin D. Roosevelt and jazz great Louis Armstrong among its membership.

The order began shortly after the U.S. Civil War in a bid to restore friendship and benevolence between the Union and Confederacy.

"One of the most important things (they provided) was burial insurance," says Vancouver historian Maurice Guibord, who plans to lead walking tours of the Western Front on Nov. 12 and 13.

In the 1920s, many poor and ambitious men ventured to Vancouver in search of wealth. Fearful of being forgotten in death, many underwent initiation rites and joined the Knights of Pythias, Guibord says.

The knights commemorated initiation by donning paramilitary uniforms similar to the garb worn by soldiers in ancient Greece, only more ostentatious.

"It's almost Michael Jackson-ish," Guibord says of the costumes, which included spears, swords and capes.

But the most intriguing detail of the initiation rites was the hint of death in the room.

"It was part of the scenery during the ritual," he explains.

The order, which still exists, also provided a type of health insurance for its members, but it's that dash of the macabre that attracted Pawsey to the building.

"The Western Front is one of the few remaining wood-frame buildings in Vancouver," Pawsey says. "And there's this whole hidden history."

Pawsey is planning to pay tribute to the building's past with the seldom-heard Apparition while dance troupe Tara Cheyenne Performance debuts The Three Widows in another room. Each piece will be performed twice, giving the audience a chance to tailor their evening as they see fit.

Apparition, a meditation on death composed by George Crumb and based on the poetry of Walt Whitman, combines operatic power with a complexity that would be fitting in a calculus equation.

"It's a tour de force for the singer, it's just phenomenally demanding," Pawsey says.

The demands of intricate, modern music have always created fear in Pawsey.

Growing up in Regina as the daughter of a piano teacher, Pawsey says she can't remember a time when music wasn't in her life.

"My mom tells me I sang before I talked," she says, recalling a childhood spent wanting to be Mozart.

She grew up singing classical music and eventually warming to opera, but it wasn't until studying at The Banff Centre that she embraced modern music.

"I hadn't really sung contemporary music before and it was really daunting, and really quite scary, but I found out that I had an affinity for it," she says. "When you take on a challenge like that and you conquer it, it's like flying."

Despite the difficulty of Apparition, Pawsey stresses the music isn't jarring or off-putting.

"It's not something you'll be able to sing when you leave," she says. "But it's accessible."

The lyrics of Apparition are taken from Whitman's elegy to slain U.S. President Abraham Lincoln, "When Lilacs Last in the Dooryard Bloom'd."

Faced with the challenging nature of both the text and music, Pawsey decided she wanted someone to help with the show's choreography.

But while Friedenberg worked on Pawsey's choreography, her mind was never far from Highgate Cemetery.

"It captivated me," Friedenberg says of the graveyard. "Death was really present in the life of the Victorians. There was infant death all the time; cholera, and all these diseases that we don't see anymore."

A dancer who oscillates between the goofy grace of Steve Martin and the movements of the classical ballerina she once aspired to be, Friedenberg was inspired by the morbid fashions of Victorian England.

"People on a regular basis would go bankrupt from financing funerals," she says, speaking over the sporadic wails of her newborn. "It's in such high-contrast to how we are. We kind of sweep it under the rug. We put our seniors in old folks' homes, and it's all taken care of so silently."

The Three Widows, part of a larger dance piece Friedenberg is hoping to debut next year, is a gothic romp scored by tinny, haunting sounds you might associate with a lonely carousel or a music box from another century.

"It's this examination of these widows and how they cannot get away from each other and they are dependent on each other, but they kind of drive each other crazy," Friendenberg says.

While the piece is partially scored by backwards talking meant to evoke the sÃ©ances that were popular in Victorian England, Friendenberg says the piece is underscored with humour.

"Even though some of my pieces can be fairly dark, there's always stuff to laugh at," she says.

"Her installation is a very, very personal tribute to her wife who was killed in that terrible float-plane crash," Pawsey says.

Holman's wife died in a crash off Saturna Island in 2009. For Pawsey, there is great importance in staging work that focuses on sentiments that often go unexpressed.

"Art can speak the unspeakable," Pawsey says, adding that art supplies will be on hand for inspired audience members.

After tending to her newborn, Friendenberg explains the importance of a show examining death.

"There's an entrance and there's an exit, and if we ignore one of those, we become very much out of balance," she says. "Looking at death can be very life-affirming, and a beautiful thing. Even though. . . we can't understand it."

Tickets are available at brownpapertickets.ca and at the door.