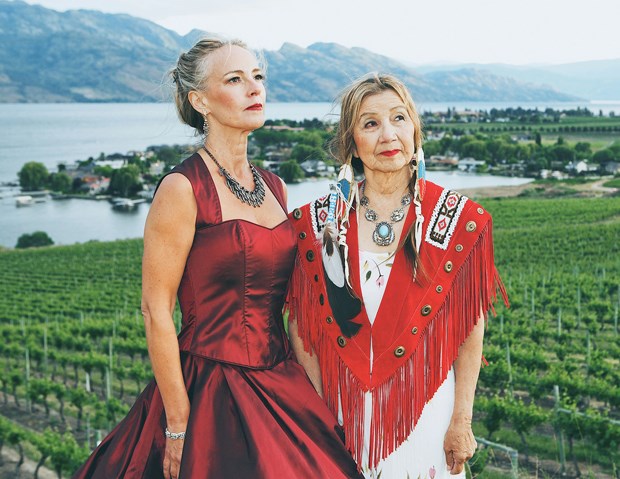 One might say it was providence that brought a little known opera to the attention of soprano Heather Pawsey.

She was preparing for the Eckhardt-Gramatté National Music Competition in 1995 when The Lake literally fell into her presence.

"I wanted to sing an aria from an opera so I went down to the Canadian Music Centre and I spent days just pulling scores off shelves," says Pawsey, a music instructor at Capilano University. "One day this very big, handwritten score by Barbara Pentland, who's a British Columbia composer, hit the desk and I opened it and I honestly can't say why but I looked at the first page and I went 'this is it and I'm going to have a really long history with this work.'" She went on to win the competition.

The Lake was written in 1952 by Barbara Pentland and Dorothy Livesay, and is based on the real life story of Susan Allison and the events surrounding the first sighting of Ogopogo, or N-ha-a-itk. Allison and her husband John were the first Europeans to settle in the Similkameen Valley.

Pawsey says the opera has never been performed, other than a radio debut in 1954 on CBC, and a student version in the 1990s by teacher and mentor, Phyllis Mailing.

Astrolabe Musik Theatre is presenting the opera Aug. 15 to 17 at the Quails' Gate Winery, with Pawsey in the role of Susan, who is nine- months pregnant.

"They had a ranch called Sunnyside," she says. "She (Susan) raised her 14 children, she helped John with mining and ranching, she was also a writer and she was keenly interested in Aboriginal culture, the culture of the people that surrounded her."

After the Eckhardt-Gramatté, Pawsey was in the Okanagan at the Quail's Gate Winery, looking through a scrapbook of material, she says, relating to the property in what was then their tasting shop.

"What I didn't realize was the log structure I was standing in was John and Susan Allison's 1873 house," says Pawsey, while the winery is the former Sunnyside ranch.

"I had chills. Immediately I thought 'this opera needs to be performed and it needs to be done here.'" Pawsey and Turning Point Ensemble performed a small concert version at the Chan Centre for the Performing Arts in 2012.

"That was our first opportunity to really hear the work performed with professional singers and orchestra," she says.

About two weeks prior to the show, Pawsey says they held a public symposium called The Lake Speaks with Jordan Coble, curatorial and heritage researcher at the Westbank First Nation Sncawips Heritage Museum.

"(He) spoke to us about the Syilx Okanagan people, about N-ha-a-itk, about it's meaning to them as a metaphor for sustainability and its deeply spiritual significance," says Pawsey.

After the second performance, she was approached backstage by Westbank First Nation elder Delphine Derickson.

"'She said, 'I'm a singer and, in our nation, I own all the songs to do with the lake and the creature in the lake,'" says Pawsey. "She said 'I have a N-ha-a-itk song I'd like to share it with you,' and my heart stopped because that is such a huge honour to be gifted with a song."

A collaborative relationship soon formed. Pawsey describes the final product as "a fully integrated 90-minute program with contemporary Syilx Okanagan culture and a brand new world premiere work by Vancouver composer Leslie Uyeda, which is based on that song that Delphine Derickson offered to us."

Uyeda orchestrated the piece for Western instruments for the Turning Point Ensemble and Derickson and Pawsey will sing in both their languages as well as Gaelic.

Corrine Derickson, Delphine's daughter, also choreographed a dance that will be inserted into the opera.

"We have all kinds of contemporary Syilx Okanagan cultures and all these new works that will be performed before, during, in the middle and after," says Pawsey. "Its sort of looking at history moving back, moving forward, in the present in this sort of continuum of what was and the relationships that were established during contact and the relationships that are still maintained."

"It's a huge grassy area that's on a bluff overlooking the lake, which actually Susan Allison talks about in the opera," she says. "So the audience will be looking out over the lake to the mountains beyond."

Preparation for the production has taken some time, from the first concert in November 2012 to February 2013 when the project was given the green light.

"We've had a number of trips to the Okanagan over the last year, every two months or so we've gone and spent days - workshopping, talking ideas, figuring out our relationship," says Pawsey. "It took a good year to come up with the script that we now have and the shape of the show and how everything fits and we're absolutely thrilled, we can't wait to share this with people."

Pawsey founded Astrolabe Musik Theatre in March 2010. She says she goes with her instincts and heart when choosing productions, not only for Astrolabe but also for herself.

"It has to be something that I find compelling, I'm very drawn to things that haven't been done before or maybe have been done but need to be seen again or heard again," she says.

"I always look for elements of how to present this in a new and fresh way, how can I bring in dance, can I incorporate film or video."

She also looks for things that can be site specific. "An alternative venue can very often enhance the work because really I do the work that I do for the people that are going to be there to see it," says Pawsey. "I don't sing for myself, I sing for people, because that's why we perform, it's for the audience."

Sometimes audiences can be intimidated by classical or contemporary music, she says, but she hopes that's changing.

"For me, for somebody who really wants to say 'look here's this whole world of beauty and challenge and excitement,' how can I open as many doors for people into that as possible?" says Pawsey.

Pawsey has taken audiences underground at the Britannia Mine Museum, through the grounds at VanDusen Botanical Gardens and even to a crematorium.

"I look at venues as to whether or not they would be appropriate or interesting for an audience because I want it to be an immersive experience," she says. "I want an audience to have as many connections to the work as possible."

Everything is done with a lot of thought so the music is primary, says Pawsey, "it's an organic fit," and not just something layered on the music.

Pawsey is also a private music instructor at Capilano University, teaching singing lessons twice a week. She offers one piece of advice for her students that want to pursue singing professionally.

"You have to want to do this more than anything else because it's hard, it's hard work to be a professional singer," she says. "But if you do, you put in the work that you have to put in. It's like flying, there's no other feeling in the world like singing."

Her commitments as an artistic director, a teacher and professional singer can be a balancing act, she says.

Pawsey's next project is creating roles for Vancouver Opera's commission of Stick Boy, written by Shane Koyczan and composed by Neil Weisensel, starting in late October at the Queen Elizabeth Theatre.

"I'm really, really excited about that," she says. "I've known Neil for a number of years and just love his music, and then of course Shane Koyczan, I've been a fan forever."

Pawsey also has a number of projects in mind for Astrolabe.

"There are some big ones that are going to take a couple or three years to develop," says Pawsey. "And there's a couple that I'm thinking of specifically for next season."

And as for whether or not Pawsey believes in Ogopogo? "Yes I do, I completely believe in N-ha-a-itk, in the spirit of the lake, absolutely, in a more profound way than I ever would have known had I not met my incredible colleagues from Westbank First Nation, who have just opened my eyes," she says. "It's been a humbling, incredibly rewarding rich experience to learn and I've just started to learn."