Graphic arts back in vogue at Word Vancouver

Cartoonist Julian Lawrence represents part of a renewed resurgence of the art form
Sep 25, 2015 12:00 AM By: Erin Mcphee 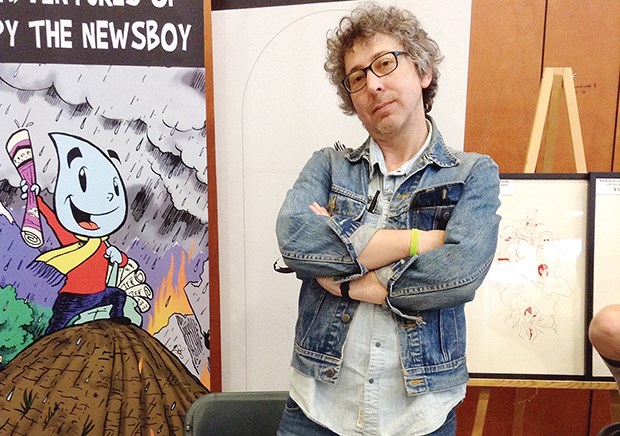 "I decided to be an artist when I was in kindergarten," says Julian Lawrence.

Reached Wednesday by the North Shore News, the Vancouver-based, award-winning artist and illustrator who specializes in comic books recalls the pride experienced when, at that age, he painted a picture of Peter and the Wolf that had impressed his teacher so, it was deemed worthy of being hung up for all to see. "It just felt really nice to see my artwork hanging on the wall," he says. His future was further cemented when he got to Grade 4.

While the Lower Mainland has been home for the last 26 years, Lawrence was born in England and raised in Québec. He recalls another supportive teacher then, after seeing that he could draw, encouraged him to submit assignments in comic form. "Growing up in Québec there were comic books everywhere in the classroom all the time. I was reading Tintin, I was reading Asterix and Lucky Luke and all these other Belgian and French and European comic characters. In France, comic books have always been seen as the ninth art, as this great medium, this great language of expression. And that kind of came over to Québec as welll ... They weren't seen as something that lazy readers would gravitate towards, they were seen as important as any other books. I could sign comic books out of the library, I could do book reports on a Tintin book. I could hand in homework as a drawn comic," he says.

That early exposure and support translated into a life-long love affair for the craft, and Lawrence is continuing to produce his own work as well as educate people of all ages about the medium, advocating for its possibilities as an art form for self-expression.

This year has been a busy one for the artist, having released a graphic novel on Conundrum Press in May, The Adventures of Drippy the Newsboy Vol. 1: Drippy's Mama, with its follow, The Adventures of Drippy the Newsboy Vol. 2: The Red Drip of Courage set for release next month. Lawrence will offer insight into his work at this week's Word Vancouver, an annual free festival of reading and writing that kicked off yesterday, Sept. 23, and is offering a variety of programming through Sunday, the main Festival Day, running from 11 a.m. to 5 p.m., at Library Square at the Vancouver Public Library Central Branch. Festivities will include readings, panel discussions, professional development workshops, entertainment and an exhibitor marketplace.

This year's festival is offering an increased focus on comics and Lawrence is pleased to be returning, having been part of Word Vancouver during its early days, which go back to 1995."Now there seems to be a resurgence of interest in comics, which is kind of a roller coaster thing that's been affecting comics since they started in 1934, the sort of up and down. .. ride of where they hit a peak of popularity, and then they crash again, and then they come back up again, and then they crash again. It's a whole series of things that seem to affect them. Now it seems like comics are back in the mainstream and we're seeing a lot of movies being made out of comics and that's trickling into an interest in some of the more alternative comics that are happening. That's what I appreciate about Word this year, is that they really seem to be putting a focus on alternative comics and do-it-yourself comics too," he says.

On Sunday, Lawrence will give a presentation on his own work at 4:10 p.m. As well, he's participating in a panel as part of the festival's Underground Words + Art programming, entitled Comics: DIY and Self-Publishing, at 2 p.m., joined by David Lasky, Leonard Wong and moderated by Ed Brisson. Examples of other comics events include a Comics Workshop for Beginners with Lasky at 12:30 p.m. "The comics that I draw are meant to appeal to a wide range of ages. I'm not just drawing books for kids or books for adults. The books I draw, I'm trying to appeal on various levels. My books are for kids aged seven to 107," says Lawrence.

His new graphic novels The Adventures of Drippy the Newsboy Vol. 1: Drippy's Mama and The Adventures of Drippy the Newsboy Vol. 2: The Red Drip of Courage are the first in a three-part series seeing him adapt the works of prolific American author Stephen Crane. Vol 1 is based on Crane's George's Mother and Vol 2 on The Red Badge of Courage. Lawrence had heard of Crane -his face appears on The Beatles' Sgt. Pepper's Lonely Hearts Club Band album cover -but he'd never read any of his work until one day he randomly picked up an anthology of his writing at a thrift store.

"I loved his writing style. He writes narration in this really beautiful, poetic way. But then when it comes to people speaking and dialogue it's written in this very rough, early Bronx accent. He was writing in the 1890s, he died when he was 29, but he wrote tons of books. He was a reporter, he travelled the world and just wrote all the time and put out quite an amount of work for the short time he was alive. His work really speaks to me. What I've done with my adaptations is to maintain that dialogue but then to try and, instead of having that poetic narration, to have really nicely detailed artwork to go with (it)," he says.

Vol. 1 sees naive Drippy get pulled into the world of the Forbidden Zone and in Vol. 2 prepare to go to war with the enemy. The character emerged in 1999. Lawrence had been working as a comics editor at a local weekly publication called Terminal City. When Terminal City closed, Lawrence and a couple of other ex-employees rallied to put together their own monthly newspaper, The Drippy Gazette. "It was conceptual in the sense that we imagined Vancouver, which is very rainy, as being Drippytown and Drippy was the mascot," he says. The mandate of the monthly publication was to feature artist interviews and events, and keep the Vancouver comics scene together. While the newspaper lasted 12 months, Drippylived on in Lawrence's work.

Apart from focusing on his own comics, Lawrence is currently enrolled at the University of British Columbia, working on a masters exploring comic books and education. He's also continually busy teaching and leading workshops on the art, seeing a real value in hand drawing. Lawrence works with the North Vancouver Community Arts Council, ArtStarts and Emily Carr University of Art + Design where he has a Continuing Studies course, The Contemporary Comic, running Sept. 28-Nov. 23.

Lawrence will unveil Vol. 2 of The Adventures of Drippy the Newsboy at Word Vancouver and will launch it officially at the Short Run Comix and Arts Festival in Seattle Oct. 31. He plans to work on Vol. 3 this summer with a potential release in fall 2016. His books are available on Amazon.ca, at Lucky's Comics or RX Comics on Vancouver's Main Street, or North Vancouver's Lonsdale Avenue Big Pete's Collectibles.