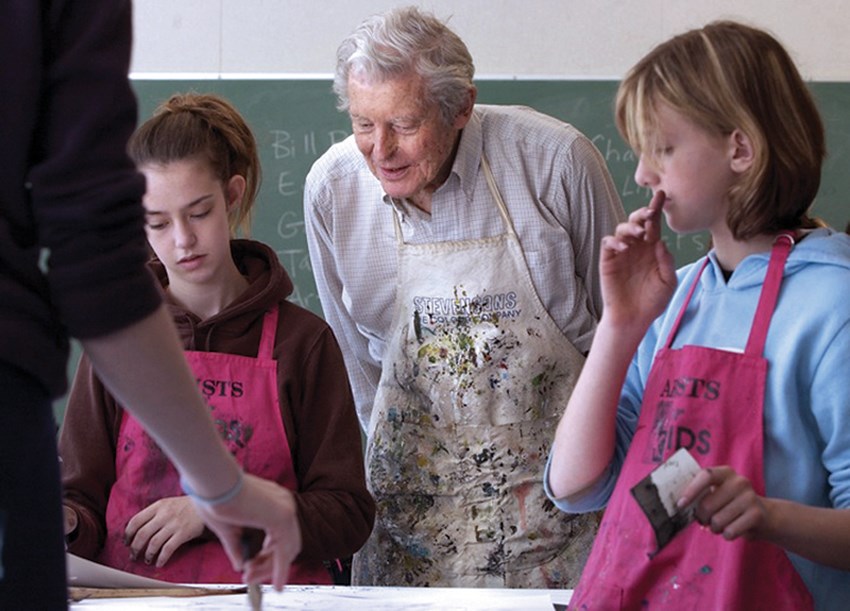 West Vancouver painter and arts educator Gordon Smith works with elementary students in an Artists For Kids program in 2003. The late artist has bequeathed $1 million to the Vancouver Art Gallery, it was announced Tuesday.Mike Wakefield, North Shore News files
The legacy of one of the country’s most beloved artists and champions of Canadian art continues to grow following the creation of a new curator position at the Vancouver Art Gallery.

When Gordon Smith, who resided in West Vancouver for decades, wasn’t busy capturing the essence of the West Coast through his brushstrokes, he was also a generous and longtime supporter of the gallery. Smith died at his home in West Vancouver in January 2020. He was 100.

On Tuesday, it was announced that Smith had bequeathed $1 million to the gallery.

His donation has been matched by his close friends Stephen and Gail Jarislowsky, of The Jarislowsky Foundation, to provide a $2-million endowment for the gallery.

The gallery has announced it intends to use the donation to create a new curatorial position dedicated to Canadian art.

The position, which the gallery plans to post and hire for immediately, will be responsible for fostering the research, presentation, and collection of Canadian art and promote the “invaluable work of historical and contemporary Canadian artists” at the gallery, according to a news release.

The bequest and donation were welcomed by Vancouver Art Gallery CEO and director Anthony Kiendl, who stated in the release that “the extraordinary generosity of Gordon and Marion Smith and Stephen and Gail Jarislowsky through their foundations is incredibly moving.”

“These gifts are important in so many ways. The funds will not only help our amazing team at the gallery carry out the important work of providing enriching art experiences, but they will also serve as an inspiration for others,” stated Kiendl.

Smith was known for his nature-inspired paintings which blurred the lines between realistic representation and abstraction. Most of his paintings were inspired by B.C. landscapes, and the renowned artist continued creating works right up until his death.

Although he was one of Canada's most acclaimed artists, his impact on arts education and inspiring new generations of painters is perhaps just as big a part of his legacy.

The Gordon Smith Gallery of Canadian Art in North Vancouver opened its doors in 2012 to provide art enrichment opportunities for children and to showcase exceptional Canadian art curation and education.

Smith, along with his wife and muse Marion, has in the past also provided the Vancouver Art Gallery with an endowment to support its educational programs.

The Gordon and Marion Smith Foundation for Young Artists was founded in 2002 to establish an endowment fund, the interest from which would fund ongoing visual arts enrichment opportunities for the children of British Columbia.

The $1 million that Smith has bequeathed to the gallery for its new Canadian art curator position further cements the artist’s legacy of championing Canadian art in all its forms, said Yolande Martinello, executive director of the Gordon and Marion Smith Foundation for Young Artists.

“Gordon’s been a huge influence in the Lower Mainland in particular. He was very generous and always concerned with the education of young people around Canadian art. This obviously creates another lasting legacy,” said Martinello.