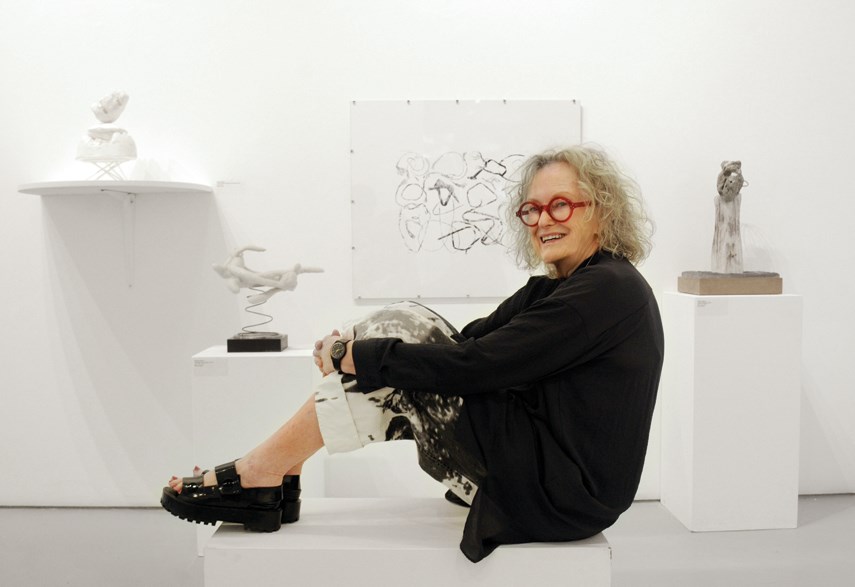 The figure – a subject for artists throughout the centuries. From cave scratchings to selfies, the human form has long been a topic of visual interest to our species. In Go Figure, three artists hold up a mirror to humanity, exploring the human figure and psyche from multiple approaches including the surreal, the crude, the conceptual and the carnivalesque.

The show brings together work by local legacy Susanna Blunt, (sculptor, painter and former portraitist), Alexandra Phillips (sculptor, writer and associate professor at Emily Carr) and Dion Kliner (Vancouver-based sculptor and writer). Months ago, Blunt envisioned this group exhibition, and through a submission and selection process, North Van Arts has made it happen.

At the clean, bright gallery space of Cityscape Community Artspace on Third and Lonsdale, Go Figure presents a curious yet pleasing mix of mediums. Works of all shapes and sizes hang high and low and sculptures peek from around corners. The close proximity puts them all in dialogue, informing and engaging with each other.

One walks in to an immediate view of Alexandra Phillips’ sculpture, A Higher Vision, on the far wall (the cover work for the show). I am drawn immediately to the miniature ladder on which the small headless figure stands – so perfectly sized to its body (a childhood fascination with dollhouses persists). Having reached the top, something about its body language seems forlorn, as a large planar face looks glumly back. Social commentary is palpable in Phillips work – in this case the “futility” of ambition. The work contemplates, when you reach the top of the metaphorical ladder, what will you find?

At the top of the room stands the bold bust of Coriolanus, his skewed and misshapen face observing the rest of the room, expression impossible to decipher. Dion Kliner’s larger-than-life plaster sculpture is crude and unsmoothed; he intentionally uses an intermediary material to research the oft-overlooked middle of an artist’s process. I find something playful about its unfinished appearance – like playdough in a child’s hands, finger and tool prints betray exact gestures.

Further into the room, inkjet prints from Susanna Blunt’s Dubai Series hang constellation-like along the wall. At the centre of these (with near-gravitational pull), is a profound work “Dubai Series (4).” A fragmented human form, curled in fetal position, hangs amid swaths of stars. The boots, gloves and other visible objects were collected by the artist from Dubai’s worksites, evidencing the city’s invisible workers.

At the exhibition opening last Thursday, Blunt revealed to me that the Dubai Series has more sociopolitical weight than she intended. Yet she adds – with emphatic hand gestures – that these artworks are not just about the human form, but the soul, for the two are inevitably linked. Later, as I stand before this particular work, the whole spinning exhibition finds its ground. Doesn’t all artwork research the human – the figure, the psyche, the soul?

Go Figure is on exhibit at CityScape Community Artspace until July 20.