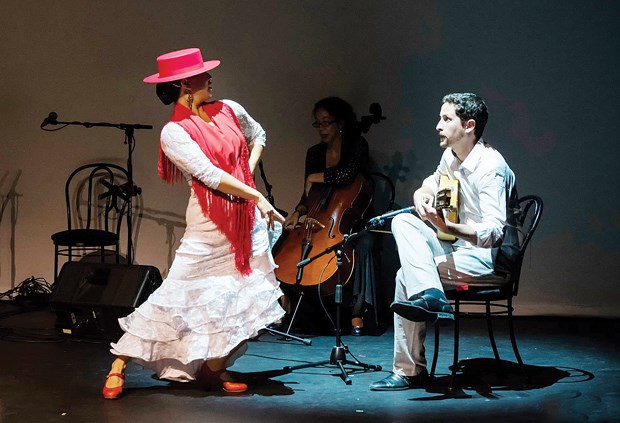 It was love at first step when Kasandra Lea took an introductory flamenco dance lesson 20 years ago.

At the time, she was a 23-year-old violinist studying music at an elite level. One of her teachers suggested she try a dance class to "get into her body" in order to help her better express her music.

"And so I took flamenco and I actually never went back to the violin," the Edgemont resident says with a laugh.

Accustomed to the rigidity of classical music, Lea was fascinated to discover a genre that was more improvisational in nature. Plus, she loved stomping her heels and swinging her hips to the percussive sound of the flamenco guitar.

Today, Lea performs under the stage name Kasandra "La China" - a nod to her Chinese-Canadian heritage. In 2002, she co-founded Vancouver's Al Mozaico Flamenco Dance Academy with one of her early mentors, Oscar Nieto. She is also the prima bailaora (dancer) and choreographer for professional company Mozaico Flamenco Dance Theatre.

The two shows on Aug. 22 at Presentation House Theatre mark a first for Lea as she forays into solo dance. Presented by the Kasandra Flamenco Ensemble, the two Solo Flamenco performances demonstrate the music and dance "in its purest traditional form," the cuadro, which is a foursome consisting of a dancer, a singer, a guitarist and a percussionist.

Lea has assembled a group of international musicians to join her on stage, including Liron Man of Israel on guitar, Davide Sampaolo of Italy on cajon (the Peruvian drum box) and Jafelin Helten of Venezuela on vocals. Both together and unaccompanied, the four performers will demonstrate the "virtuosic" nature of flamenco, Lea says.

"We showcase the difference between flamenco jondo and flamenco chico," she notes, explaining that the former is a deep, melancholy piece and the latter is a light, happy song.

"We're going to go from really deep, profound songs and then, later on in the show, kind of show the more happy, fun side of flamenco as well."

The final number, she reveals, is a cheery Cuban-flamenco fusion in which she will be fluttering Chinese silk fans.

Contrary to popular belief, Lea says that flamenco is not actually a Spanish dance.

"Flamenco is quite mistaken for being a Spanish art form. It is actually, in fact, a gypsy art form that originated in the south of Spain."

She traces the roots of flamenco to Jerez de la Frontera, a small Andalusian city in the south of Spain where the Roma people resided. These oppressed travellers would stamp their bare feet in the sand in protest, she says, giving rise to what has become a popular and recognizable dance worldwide.

Since taking up flamenco, Lea has been to Spain eight times, including trips to Madrid, Seville and Jerez de la Frontera to learn from the masters. Aside from the characteristic lightningspeed footwork, sweeping arm movements and upright posture, Lea says flamenco is distinguished by the presence of powerful emotion.

"It hits you in the stomach because it comes from a deep, emotional place," Lea says. "It's really an emotional expression of the singer and the music, and so this is very clearly displayed in facial expressions and emotions and it's very direct."

While a jazz dance solo, for example, might be a fast-paced four minutes, Lea says a flamenco dance solo is much longer, tends to start gradually and builds toward a fiery climax, then stops and starts all over again.

As evidenced by her dance students, flamenco appeals to a wide range of ages and backgrounds. Initially, people are often drawn to the esthetic - the ruffles and lace, the fringed shawls, the brimmed hats.

"On the superficial level, I think people are seeking the girl in the red dress with the red rose in her hair and all of the beautiful costumes," Lea says.

In her own experience, though, it was digging beyond the surface and discovering the history of flamenco, learning its complex time signatures and figuring out how to interpret the music through movement that got her hooked.

"You can try flamenco for three months and if you love it, you are there for 10 years," she says.

Michael Bublé lends his voice to Arts Club fundraising appeal
May 11, 2021 10:05 AM
Comments