Supernatural thriller a remake of Ghost From The Machine
Jul 27, 2018 9:39 AM By: Julie Crawford 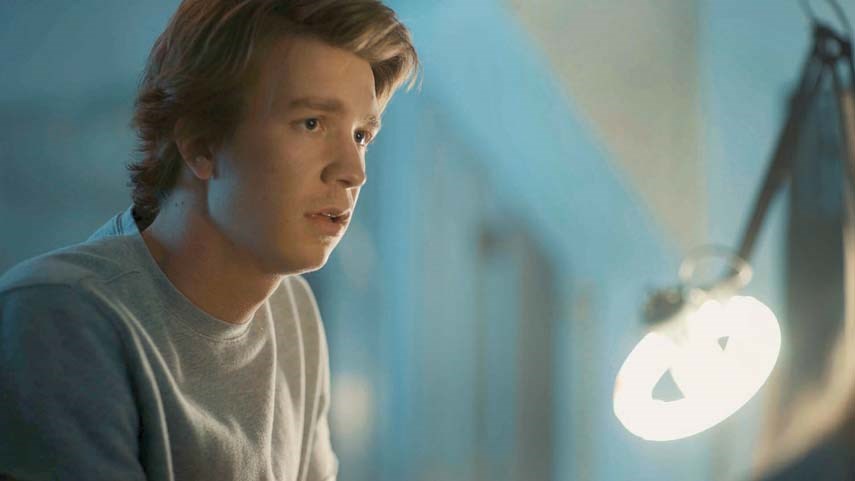 Thomas Mann stars in Our House, directed by Anthony Scott Burns, adapted from a screenplay by Nathan Parker, and based on 2010’s Ghost from the Machine.Supplied

Our House. Directed by Anthony Scott Burns. Starring Thomas Mann. Rating: 6 (out of 10).

After its premiere earlier this week at Montreal’s Fantasia Film Festival, Our House is set to unleash home-grown scares across Canada today.

Our House is Anthony Scott Burns’ first feature. The Toronto-based composer and director found fame as an electronic musician under the name Pilotpriest before moving on to short films and the Our House feature. (Several projects are in the pipe, including a sci-fi thriller under Brad Pitt’s production company Plan B.)

The remake of 2010’s Ghost From The Machine centres on Ethan (Thomas Mann), a college student on the verge of a technological breakthrough when his parents are killed in a car accident. That makes him the sole caregiver to younger brother Matt (Percy Hynes White) and little sister Becca (Kate Moyer), and so his experiments on electromagnetic induction necessarily take a backseat, replaced by minivan trips to school and swim practice.

Oddly, Ethan refuses help from his girlfriend (Nicola Peltz) and goes it alone, dishing up sugary cereal and pizza for his siblings, each of whom is coping with their grief in different ways. Three months later, Matt still blames Ethan’s absence for his parents’ death and little Becca can’t sleep in her own room.

But in between playing dad and his job at a hardware store, Ethan tinkers with his device, designed to charge light bulbs and cell phones wirelessly and revolutionize electricity as we know it. Instead, as the invention glows red in the garage, strange things start happening in the home: Becca has conversations with her dead parents, and Matt receives messages. Items shift in the home, and the old-school calendar clicks and advances all by itself. “I think Mom and Dad are trying to tell us something,” insists Matt. “Don’t you think we should listen this time?”

Every time Ethan fiddles with the knobs there’s a new result, and before long the paranormal effects are felt beyond the family home. Apart from power surges generated by the machine and flickering lampposts, a widowed neighbour (Robert B. Kennedy) confesses that he has been visited by his dead wife; now everyone has a reason to keep the device powered up, even if it does mean conserving energy and living in candlelight.

But with the visitation of good spirits come new and malevolent ones. Or maybe the ghosts of mom and dad aren’t who they claim to be...

The scares in Our House are relatively family friendly and designed to be creepily atmospheric rather than heart-stopping. A script by Nathan Parker (Moon, Equals) smartly concentrates on the sibling dynamic, currying audience sympathy before the smoky ghosts are introduced. (As with all films in the genre, things are scariest before the ghost/monster actually appears.)

Lead Thomas Mann is the best-known member of the cast: you’ve seen him in Me And Earl And The Dying Girl, Kong: Skull Island and Project X, among others. But young Kate Moyer may be the best of the bunch, delivering her dialogue and screams without the wide-eyed preciousness of many child actors.

Things get a little choppy with the introduction of hidden rooms and rumours of nasty foster parents, but the film never lags nor lacks visual interest and suspense. Overall Our House is a brisk, inoffensive and thoughtful addition to the genre.