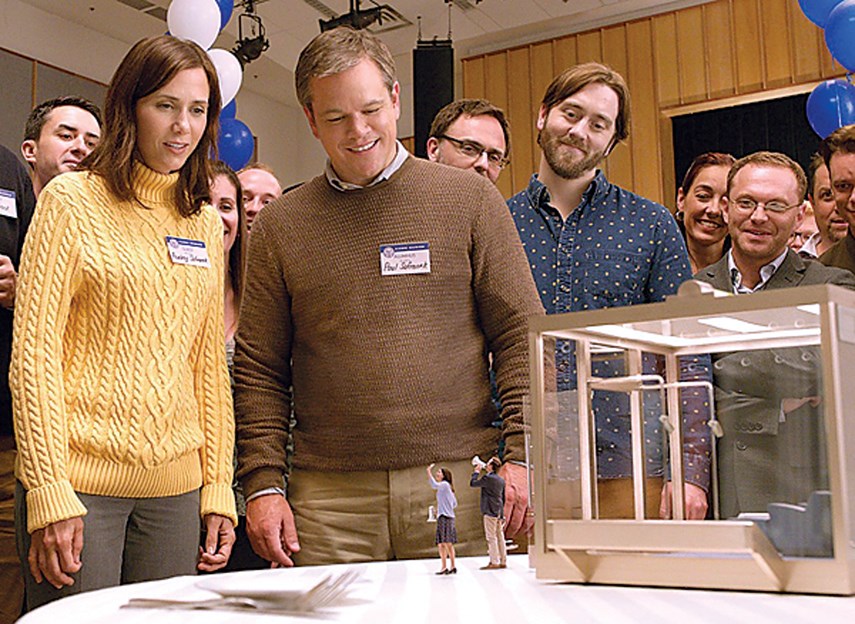 Alexander Payne’s Downsizing begins as social satire couched in comedy – think Honey I Shrunk The Kids with an environmental slant – but turns robustly political and introspective a third of the way in. An unwelcome shift, and one sure to jar viewers.

Payne excels in the everyman, something he did best with Paul Giamatti in Sideways. Here his everyman is Paul Safranek (Matt Damon), a guy who dropped out of college to care for his mom, and who still lives in the house he grew up in. Now he works as a physiotherapist for Omaha Steaks and is happily married to Audrey (Kristen Wiig), but both of them are tired of barely scraping by.

While Paul has been living his life, the biggest – or smallest – invention of a lifetime has occurred: humans can be shrunk to .0364 per cent of their size, a marvel of science and a possible solution to the overcrowded planet and shrinking natural resources. When Paul and Audrey attend their high school reunion they bump into old classmates who have been shrunk down and are living large – so to speak – in an upscale small community, complete with mini mansions and three Cheesecake Factory restaurants.

Paul is keen to do something good for the planet; the fact that their paltry savings is the equivalent over $12 million in a small community doesn’t hurt. The couple decides to take the plunge and Payne doesn’t shrink away from the gorier details of the shrinking process: the necessary removal of all body hair, the extraction of fillings. Eventually subjects are wheeled into a chamber and, post-process, moved onto a gurney with a giant spatula. Paul survives the process intact but that doesn’t mean that things don’t go catastrophically awry.

Fast forward a year and Paul is working listlessly in a Lands End call centre and living in a luxe apartment below a Eurotrash neighbour (Christoph Waltz) with shady big-small contraband dealings. After one of Dusan’s hedonistic parties, Paul meets Ngoc Lan Tran (Hong Chau), a former Vietnamese political prisoner and minor celebrity who hobbles on one good leg cleaning the houses of the wealthy.

Through her Paul sees the seedy, largely Hispanic, side of Leisureland, fittingly, on the other side of the massive wall that surrounds the community. He puts his doctoring skills to work helping the poor. She’s pushy, and he can’t say no. It’s a worry that her broken English is being played for laughs, and disappointing that her fierceness is apparently waiting to be softened by a white man’s touch.

Fate finds them all back in Norway at the pioneering small commune that started it all, where Paul is faced yet again with leaving the world he knows behind. Things get a bit strained here. Downsizing is an ardently humane film but it leaves itself nowhere to go, backing itself into a corner (or down a hole, if you will) and leaving us feeling that this isn’t the journey we signed up for.

Great effects; fun cameos by Neil Patrick Harris, Laura Dern, Udo Kier, Jason Sudeikis, Niecy Nash, Margo Martindale and James Van Der Beek (plus Mary Kay Place as the voice of a disgruntled Lands End customer). But this is really Damon’s film to carry, and he’s weighed down by his most boring characterization to date. Paul talks about purpose but has none, and we still don’t believe he has found it by the story’s end. With our protagonist’s motivations unclear, so too is the point of the film.