Dance schools collaborate on a new kind of Nutcracker 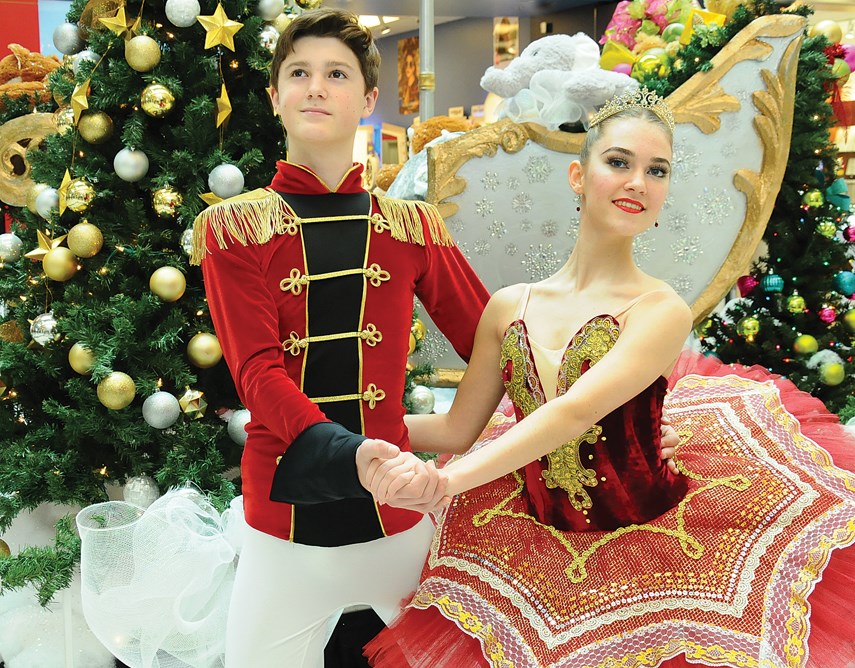 Logan Hall and Sophie Sedlacek are featured dancers in Ballet Bloch Canada’s production of The Nutcracker at the Kay Meek Centre on Dec. 16 and 17.Cindy Goodman, North Shore News

Tracy-Lea Bloch talks passionately about her latest project in a soft South African accent which matches her most graceful job.

As artistic director and founder of Lower Lonsdale dance academy Ballet Bloch Canada, she has taken a beloved holiday tradition, The Nutcracker, and turned it slightly on its ear.

The reimagined production starts with the familiar whimsical scene: young Clara floats through the air and travels through the Land of Snow and into the Kingdom of Sweets. Tchaikovsky’s traditional and familiar delicate score accompanies Clara throughout her magical journey.

Bloch twirled on stage many times in The Nutcracker during her formative years as a ballet student. But she never aspired to play to the principal role of Clara. It was a personal choice.

“I’ll tell you why,” says Bloch. “My most memorable was the first time I did Nutcracker. I was only about nine or 10 years old and I was one of the Little Chinese. I think I can still remember the dance, it was very energetic and exhausting. And I remember seeing the role of Clara – and she never did too much, especially in Act 2, she sits and watches.”

Bloch was not satisfied by sitting still. Even when she was offered the coveted role of Clara, Bloch turned it down.

“I said no thank-you, I would rather dance,” she says.

A classical ballet teacher for more than 25 years, Bloch is reacquainted with Clara, Mouse King, The Nutcracker Prince and all of their friends and foes almost every Christmas season. This year Bloch and her ballerinas are shaking things up. It’s out with the evil Mouse King, who’s been dethroned in favour of a controlling Rat Queen.

Ballet Bloch students Carissa Logan and Gabrielle Salgado share the role of Rat Queen, a mistress of the rats who commands the stage with her tail which she uses as a whip.

As with all of her shows, Bloch likes to give something extra to the audience. In this case she has taken a classical ballet and injected some hip hop and street jazz flavour.

“What I’m trying to do is tap in to what people enjoy,” explains Bloch. “Some love the ballet, some like a bit more of a beat.”

That dose of creativity is courtesy of North Shore Academy of Dance and Ballet Classique HZ out of Burnaby, whose contemporary dance and hip hop students have teamed up with the Bloch ballerinas for this show.

The result is an invigorated Nutcracker ballet which resonates with younger audiences and the performers on stage, says Bloch.

During the famous battle scene between the rats and soldiers, the ballet and hip hop dancers go toe-to-toe. The traditional story calls for the soldiers to defeat the Mouse King, so audiences will have to wait and see who falls in this show.

The role of Clara is shared by Malia Bell and Robyn Langford, two ballerinas who interpret the character each in their own way, according to Bloch.

“Bell brings a wonderful sense of natural ability to perform and act,” says Bloch, adding Langford brings a Broadway-esque vibe with her showmanship.

The Sugar Plum is a shared role by Jessica Hubbs and Sophie Sedlacek, while the Snow Queen is portrayed by Madeleine Hill. The only male ballet dancer in the show, Logan Hall, steps into the Nutcracker Doll character.

The Nutcracker Prince is played by professional guest artist and Ballet BC apprentice Lucas Wilson-Bilbro. Choreographer Monica Proença, who worked on the 2016 dance film Center Stage: On Pointe, lends her expertise to the show as well.

“Her work is just amazing. Her and I work so well together and being able to bring (the show) to life,” says Bloch.

The different dance schools started rehearsing individually in September for the show, which was choreographed from scratch. This past Saturday all the schools and costumed dancers came together on stage for the first time to piece together their parts.

“It’s exciting,” says Bloch, ahead of this weekend’s premiere.

In the final week of preparation for her inaugural Nutcracker show, the polished ballerina doesn’t let any stress show. She was never nervous about the dancers not jiving well together because, as Bloch explains, a lot of planning went into it.

Bloch hopes this North Shore dance collaboration for The Nutcracker becomes an annual tradition at Christmastime.

“There are so many dance groups on the North Shore and I just felt a need to start something, a production that would bring everybody together,” she says.