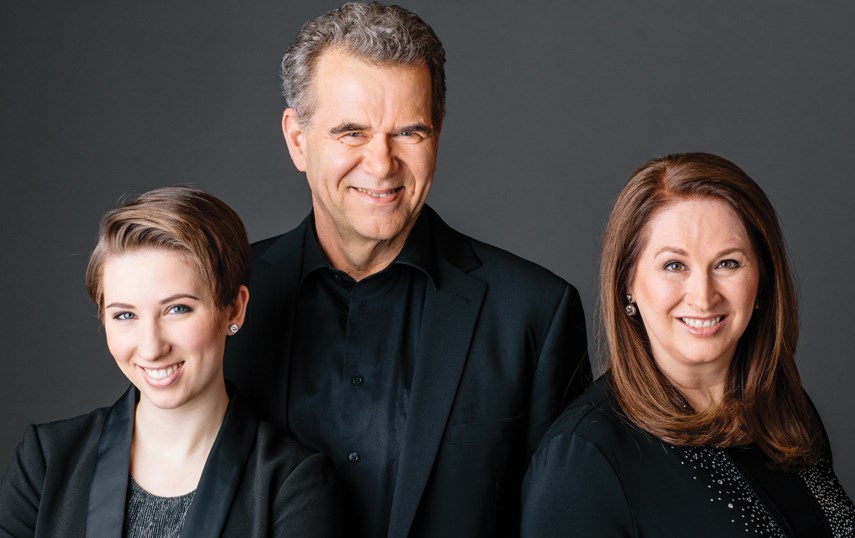 Michelle, Michael and Monique Creber will pay tribute to the music of the Carpenters in a special Christmas concert at Kay Meek Arts Centre on Saturday, Dec. 22.Supplied

Monique Creber wasn’t trying to sound like Karen Carpenter, but she couldn’t escape the comparisons.

Every family function, every gig, every time she sang – people would tell Creber her rich alto singing voice was eerily similar to that of the late Carpenter. However, Creber wasn’t convinced at first.

“I could never hear it,” she says.

It wasn’t until Creber released a CD of original songs that she believed the comparisons to be true. Canadian music critics drew a Carpenter correlation in their review of Creber’s album.

“I consider it a massive compliment,” says Creber, on the line last week from her West Vancouver home. “And I love her music so maybe I should do more of it.”

That’s exactly what Creber and her musical husband and daughter have done, in creating A Carpenters’ Christmas show at the Kay Meek Arts Centre on Saturday.

Monique, Michael and Michelle Creber are prolific performers, individually and as a family. Monique is a recording artist, director and teacher, while Michael is a Grammy-nominated entertainer with an extensive career as a pianist, film composer, arranger and producer.

Their daughter, Michelle, inherited her parents’ harmonious genes. The 19-year-old is the star of an animated TV show, and a singer, dancer, musician and songwriter.

For their upcoming Kay Meek show, the Creber clan is paying tribute to Christmas Portrait and An Old-Fashioned Christmas – by performing 15 songs from the Carpenters’ christmas albums. Sure to be included in the festive mix is the Carpenter classic “Merry Christmas, Darling,” which is Monique’s favourite tune from the famous musical siblings.

The Carpenters were a successful American vocal and instrumental duo of Karen and Richard Carpenter, who rose to prominence in the mid-1960s. They achieved major success with the hit singles “(They Long to Be) Close to You” and “We’ve Only Just Begun.”

The Carpenters’ first Christmas album, Christmas Portrait, released in 1978, was certified platinum and turned into a TV special. In 1984, after the death of Karen, her brother gave the music world a gift, releasing a second seasonal album, An Old-Fashioned Christmas, featuring outtakes the siblings recorded but never included on the first album.

“It’s just in the beauty of simplicity in her lines, where everything is so well-crafted and just so relaxed and so precise,” explains Monique. “I sometimes really tire of listening to things that are too busy – I find it not relaxing.”

However with Karen’s voice, which has a wholesome vibe, “You can sort of melt in it. It’s so soothing,” describes Monique.

The spirit of the Carpenters’ music harkens back to a classic, old-fashioned Christmas – a scene the Creber clan will replicate inside the Kay Meek theatre festively dressed with greenery, poinsettias and silver and gold trim.

The Crebers will be joined on stage by a robust choir and several guest vocalists including Steve Maddock, Gordon Maxwell – two of Vancouver’s finest male signers, according to Monique – and Natalie Sharp, an up-and-coming singer and actress.

The choir is comprised of an eclectic mix of singers the Creber family has worked with over the years, including members of the Brockton School community choir, called Cypress Singers, that Monique directs, as well as members of the City Soul Choir, of which Michael is an associate conductor.

“It’s a great selection of singers – and I can’t wait to hear what it sounds like when they are all put together,” says Monique.

A 10-piece band and chamber orchestra, conducted by maestro Clyde Mitchell, will accompany the singers while all together they emulate the classic Carpenter recordings, which are elevated by instrumental components.

“We’ve transcribed their arrangements,” says Monique, adding they are honouring the way the Carpenter songs were originally recorded.

An added listening treat at the concert will be hearing songs performed by Michelle that she recorded on the family’s Christmas album, including “Someday at Christmas” by Stevie Wonder.

Christmastime has always been synonymous with musical performances for the Crebers.

Reflecting on one special Christmas show at Queen Elizabeth Theatre about 17 years ago, Monique says there’s video evidence of her daughter’s desire to be in the spotlight.

Two-year-old Michelle was sitting in the audience watching her mom perform seasonal favourites with the likes of The Rankin Family sisters, and couldn’t resist making her debut in front of the sold-out house at the Queen E.

“And there’s this video of tiny little Michelle booking it across the stage – and the QE stage is massive –and she ran across the whole thing and jumped into my arms. She never looked back from there,” says her mom.

Asked what the audience will come away with after taking in the Carpenters’ Christmas show, Monique says it will be a heartwarming experience.

“I’m going to guess that it’s the same feedback that we get from all our Christmas shows: ‘That was the thing that totally put me in the Christmas mood,’” says Monique.

Last December, mom and daughter were busy co-starring in Little Women at the Kay Meek, so the holidays had to be put on hold until January. This year, plenty of board games, comfort food – and snow activities – are on the relaxed agenda as the Crebers head East to visit family.

“When you grow up out East, snow at Christmas is something you always want to see,” says Monique.