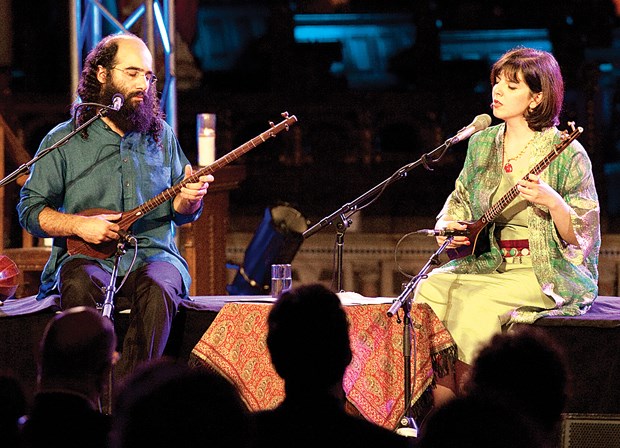 The Montreal-based Constantinople return to the North Shore this weekend, bringing with them a wealth of musical skills that combine traditional Persian culture with modern sensibilities.

The ensemble, composed of brothers Kiya and Ziya Tabassian, Didem Basar, Kyriakos Kalaitzidis and Pierre-Yves Martel, are performing their latest creation in a town they love to play in.

"North Vancouver is a place we love, and there is a huge Iranian community," says Kiya Tabassian, the front man and setar player for the group. Tabassian insists that while there is a Persian core to the music,

the show should appeal to a wide audience. "For sure the Persian community will be interested, but it's not just a concert for Iranians, because it's just beautiful music," says Tabassian.

"You don't need to be familiar with Persian music to enjoy the show."

The band formed in 1998 in Montreal, with the goal to create music that embraced multiple cultures, connecting East and West through music, according to Tabassian. "The aim of Constantinople has always been to create a new music based on different cultures and the exchange between cultures."

The ensemble produces many projects, and the latest to emerge is Paths to the Summit, a program that draws from the 16th and 17th century.

"We're recreating music from our culture from 400 and 500 years ago, and nobody has played it before because (the manuscripts) were previously lost. These are masterpieces from a Golden Age, such

Guest Sepideh Raissadat brings her own unique history as the first female vocalist to have a solo public performance in Iran following the 1979 Islamic revolution, where female singers were banned from performing in public. Raissadat has had considerable success internationally, having performed for both UNESCO and the Vatican. Kiya and Sepideh met a few years ago in Toronto, and began to collaborate due to their mutual love for Persian music. When Kiya started creating the Paths to the Summit, Sepideh was all in.

"We work very well together. She has a beautiful singing voice, and was very receptive to the ideas of the show. When I was explaining to her about the program she was very interested and wanted to know more."

On the subject of what inspired him to delve into the past, Tabassian says his fascination with the lives of many of the past musicians mirrored his own experiences as an immigrant.

"What was interesting to me was that these composers were immigrants. They moved from Persia to other countries, and passed the rest of their life in Istanbul, Greece, and they adapted to these new societies. This was an inspiration to me personally, because that's kind of my history too. I moved from Iran to Canada, living in Montreal and doing well here, and it's very touching for me that even 400 years ago there were musicians who left Persia and were recognized and appreciated in other places," says Tabassian. "It's inspiring to me."

Tabassian is hopeful the audience will respond well to Paths to the Summit.

"We are presenting the beauty and the details of the past to the audience who I think need to hear those beautiful details."

The band will be stopping off in L'Assomption, Quebec in late April before heading across the Atlantic to play in France in mid-June.