"I have a very strict gun control policy: if there's a gun around, I want to be in control of it." — Clint Eastwood. American Sniper. Directed by Clint Eastwood. Starring Bradley Cooper.
Jan 16, 2015 12:00 AM By: Julie Crawford 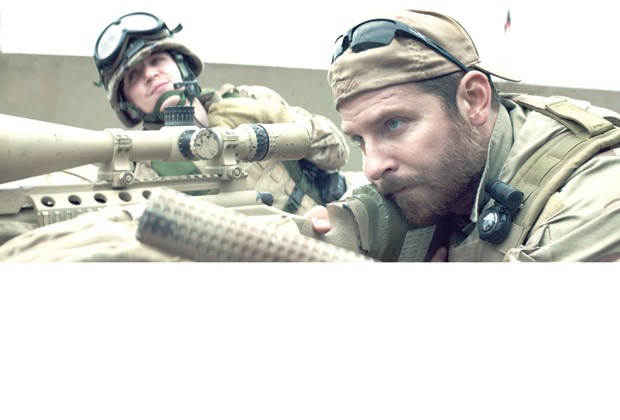 Bradley Cooper, right, stars as Chris Kyle in Clint Eastwood’s biographical war drama, American Sniper, based on the book of the same name.Supplied

"I have a very strict gun control policy: if there's a gun around, I want to be in control of it." — Clint Eastwood.

Kyle logged over 160 kills during his four tours of Iraq, a record. In case the viewer has any difficulty rooting for such an expert killing machine, and in a conflict where it's not always easy to distinguish the good guys from the bad, Eastwood makes it simple: the opening scene shows an armed woman, then an armed child, threatening a U.S. convoy. And when a seemingly kind family invites Chris and his fellow soldiers to sit down for a meal, it turns out there is a cache of weapons hidden in the floorboards. No moral complexity here; this is about the man, not the conflict.

A beefed-up Bradley Cooper, who packed on a reported 40 pounds for the role, plays Chris, a cowboy who finds his life's purpose when he enlists. He meets Taya (Sienna Miller) at a bar and she says what some of the audience is secretly thinking: "You're a SEAL? You're a bunch of arrogant, egotistical pricks." Chris' earnestness about serving his country and Cooper's inherent charm effectively shoots us all down and makes us feel sorry for ever doubting him. Plus, he does that trademark good-guy thing of holding Taya's hair back when she throws up all those shots of Jameson.

But one tour of duty turns into two. Then three and four. Chris becomes the angel of entire platoons on the ground, shooting enemies from nearby rooftops above, and before long he is simply known as The Legend. He spends more than a thousand days in enemy territory, forsaking his wife and two kids stateside. "Do you want to die? You don't know how to quit," Taya observes. The dust and the killing leave Chris homesick. He just can't reconcile that with fatherhood and mowing the lawn back home.

Chris has an ongoing rivalry with a Syrian national named Mustafa (Sammy Sheik), the enemy version of himself. The film excels in these tense battle scenes, the climactic battle in a sandstorm, in particular.

The rest of the film deals with Chris' debilitating PTSD. "What haunts me is all the men I couldn't save," he eventually tells a doctor, who points to a hospital hallway full of injured vets who need saving.

Chris Kyle's story is less sensational here than in his autobiography - one tale of which resulted in a defamation suit from wrestler/governor Jesse Ventura (now under appeal). It's difficult enough to nominate a prolific sniper for sainthood without all those bad-boy bragging stories, so Eastwood keeps the story trim.

Domestic scenes, however, are too brief and provide too little detail about Kyle's journey from professional killer to rehabilitated family man. In fact, other than a brief hunting outing with his son, there's only one scene meant to suggest that Kyle is back to normal: he walks into the kitchen, leading with his gun, pointing it at his wife in a kind of sexy game while the kids play nearby. "I'm so happy I've got my husband back," she says before the film ends abruptly less than a minute later. Some of us could have used a little more convincing.

Cooper nails the Texas drawl and makes a compelling patriot, elevating the film beyond ordinary. Had Eastwood drawn Chris Kyle's home life with the same focus as he did his expert marksmanship, American Sniper would have been a sure-fire hit.