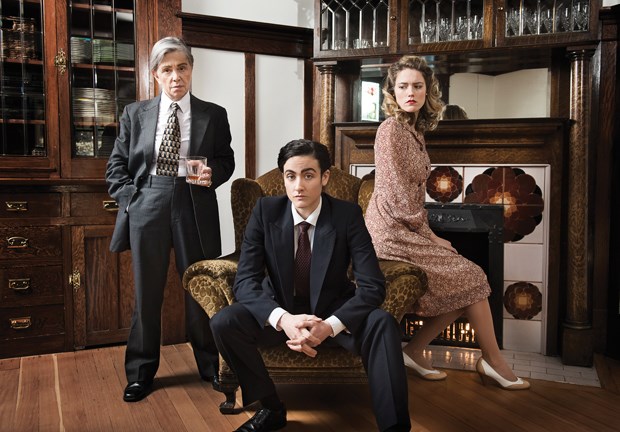 Whether you should leave the gun and take the cannoli or vice versa is the only thing you should worry about when you watch Classic Chic’s all-female stage production of Corleone: The Shakespearean Godfather.
Gender shouldn’t be a part of the equation.

“We’re about telling the story first,” explains artistic director Christina Wells Campbell. “You can’t get away from the gender part, but I always come back to gender doesn’t have to be a value. Being womanly or manly isn’t good or bad. It’s not important.”

In their upcoming play, Wells Campbell and her castmates are telling a tale first explored in the film The Godfather, which is about what she calls an underground kingdom. In this case, the kingdom is a mafia-run empire led by the Corleone family.

Although the play follows the main storyline of the popular movie, it adds Shakespearean elements in keeping with the Bard’s traditions. For example, much of the dialogue is presented in iambic pentameter, and a chorus appears occasionally throughout the play to explain the action. Wells Campbell explains that the original story lends itself to the themes of classic history plays, so the Shakespearean elements fit right in.

Certain roles also enjoy a Shakespearean makeover of sorts, and Wells Campbell points to the character of Michael Corleone as an example as he takes on the essence of a King Lear character in the stage production.

In the movie, Michael returns home to New York as a war hero and is slowly, over the course of the film, drawn into the family crime business despite originally aiming to avoid it. By the end of the first film, Michael has chosen to become “the Godfather,” the head of the family empire.

“In a (classic) tragedy they make that one decision or they can’t escape their fate and you can see it’s inevitable, how it’s going to end, but they can’t do anything to stop it,” explains Wells Campbell, comparing Michael

Corleone to traditional tragic figures. There’s a moment when Michael makes that high-stakes decision to take over the family business and everything else comes from that one moment of decision.

Wells Campbell calls the play a “real mash-up” of styles, and something she hopes the audience will have fun with because she has had fun working on it.

“It’s been fun reinterpreting it, reimagining it,” she reports.

And although she admits she hadn’t watched the original Godfather movie before starting work on the play (she has now watched the first two films in the series and is debating watching the third due to its poor reviews),

Wells Campbell read the book for background information and says she understands why the characters do what they do.

“I have some sympathy for the gangsters because often these organized crime things come about because there’s something in the established system that isn’t working for them,” she says.

There has never been a full stage production of The Godfather, but Wells Campbell assures fans their show doesn’t seek to mimic the film performances of Al Pacino and Marlon Brando.

“We’re not trying to reinvent the film, we’re trying to pay a little bit of homage,” she explains. “This is a very different Godfather.”

This creative reinterpretation of the film was written by David Mann for a male cast, but in keeping with Classic Chic’s MO, the production is being presented with female actors only.

Similar to an all-male cast playing female roles in Shakespeare’s time, all the characters remain male but are played by women. Pronouns are male and the costumes feature stereotypically male attire, namely suits.

“Since we’re all about the classics, we thought that this was an opportunity for women to take on some real classic roles that hardly any actors ever get to do,” says Wells Campbell, who was one of four co-founders of Classic Chic. The theatre company was formed to give women the opportunity to play powerful roles typically assigned to male actors. Since its inception in 2014, the group has also performed their versions of Glengarry Glen Ross and The Winter’s Tale.

As an actor, Wells Campbell, who also plays a number of thugs in the play, including Barzini, Clemenza, and Luca Brasi, says the opportunity to take on a powerful role from a male perspective has been interesting.

Generally, the idea of what a powerful female character is versus a powerful male character can be very different. And while there is a familiar female “strong woman” trope, it’s still being defined by a man writing it, notes Wells Campbell.

“I guess I’m just tired that my stories always have to have ‘female’ in front of them,” she notes. “I just want to have ‘human’ in front of it.”

Both on and off stage, she says what matters most in the big picture is simply who you are as a person.

“It’s what we’re bringing to the world. It doesn’t matter whether we’re coming at it from ‘woman’ or ‘man’ or some combination therein. And for us to all get so bent out of shape about it all the time is like we keep trying to solve this completely fictional problem. It’s not a problem.”