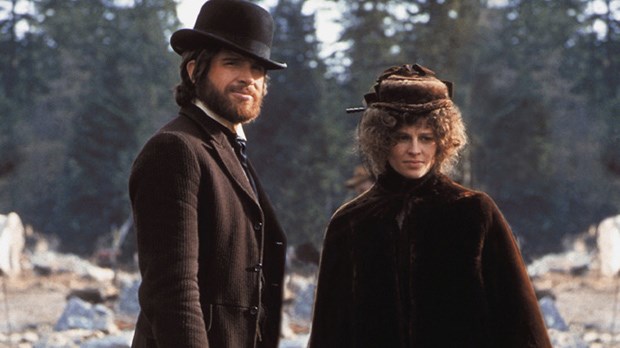 Warren Beatty and Julie Christie on the set of McCabe & Mrs. Miller.Supplied

McCabe & Mrs. Miller, although set in a 1901 mining town, is really about the collapse of 1960s idealism, the belief that you could forge an alternative reality, and occupy it, like the town of Presbyterian Church or the squatters on the Maplewood Mudflats . . .” — Michael Turner: Robert Altman’s Vancouver

When the studio bosses in L.A. first saw some of the rushes from McCabe & Mrs. Miller they were not pleased. During the winter of 1970 Robert Altman was up in West Vancouver making a movie with their money and they had no control over what he was doing. No, they were not happy at all.

Altman had spent much of the previous decade directing television shows and trying to figure out the best ways to avoid dealing with the rote machinations of old Hollywood. In the process he became a master of obfuscation. Pushing formulaic scripts he had no intention of filming gave the studios what they wanted to hear and got Altman the seed money he needed to make his own films. And then he chose locations far enough out of town that the money men would have no way of keeping an eye on him.

Vancouver suited Altman's purposes perfectly. It was just across the border and had none of the baggage attached to the typical Hollywood production. B.C.-born producer James Margellos told writer Regan Payne (in a PopMatters article http://bit.ly/1Gup6fB) that he initially pointed Altman northwards when the director was looking for a place that rained a lot and was closer to L.A. than London, England.

The first film Altman made locally, 1969's That Cold Day in the Park at West Vancouver's Panorama Studios, was a critical and box-office disaster but would set the wheels in motion for what would eventually become Hollywood North. Immediately after that production, the massive success of his next film, the black comedy MASH, gave Altman more leverage in negotiating what, when and where he was going to shoot. The independent maverick wanted to do an anti-Western and he wanted to make it in Vancouver. He started a production company called Lions Gate Films and headed north to make his movie in the wilds of Cypress Bowl.

"There was some barren land on what was called the Upper Levels," recalls producer David Foster in audio commentary included with the 2002 DVD rerelease of McCabe & Mrs. Miller. "One side of it was luxury homes with swimming pools and tennis courts. It was unbelievable. It had a great view of the water. Howe Sound. We went to the builder who owned the houses - there must have been 20 expensive, exclusive homes - and told him what we wanted to do. We wanted to rent the other part of the land and build this set and shoot the movie there. And it turned out there was a law in Vancouver that he couldn't develop the barren land until he'd sold all of the houses he'd developed. He hadn't sold them all so that made it moderately easy for us."

The two main stars of the film - Warren Beatty and Julie Christie - signed on after the buzz around Altman and MASH hit a fever pitch. Before MASH Altman "had been shooting how-to instructional baseball films in Kansas City," jokes Foster on the DVD commentary. After it's release he could pretty well write his own ticket.

Beatty was bent on making Shampoo with Christie, his girlfriend and a film star in her own right, but hadn't finished the script and was looking for another vehicle to work on in the meantime. As a prickly "perfectionist" Beatty was almost exactly the opposite of the laissez-faire, loose-as-a-goose Altman who liked to let things happen. Looking back years later, Altman thought Beatty had done a brilliant acting job on McCabe but during the filming they rarely agreed. Beatty liked to shoot many takes while Altman preferred to shoot only a few and keep things fresh. Christie too liked to get things right right from the start and didn't need to waste much time on retakes. One night shooting a Beatty soliloquy Altman eventually went to bed and left the actor working with DP cinematographer Vilmos Zsigmond.

The screenplay is based ostensibly on Edmund Naughton's 1959 novel McCabe but Altman encouraged improvisation. He worked with Beatty and Christie daily on the "script." The director shot his movies like jazz music working from a structure but constantly creating new things in the moment. Entire scenes in McCabe were structured around improvisational material. Dialogue was often made up on the spot as a scene was being shot. There was a conceptual framework but it was meant to be messed with. Altman wanted accidents to happen.

The filmmaker filled the story with the different accents and accoutrements of first generation settlers making new lives far from home. Beatty plays John McCabe, a mysterious gambler who appears in the town of Presbyterian Church one day. Christie (Constance Miller) joins him shortly after as a business partner in the running of the town brothel. Addicted to opium her character speaks with a Cockney accent and always seems to be one step ahead of McCabe's "frontier wit."

The rest of the large ensemble cast included Altman "finds" (such as Shelley Duvall and Keith Carradine) mixed in with local Vancouver actors, many of whom were appearing in their first film. The director became known for bringing his cast and crew along with him on film after film and that started during this period. He created a family atmosphere during shooting which extended long into the night as everyone was invited to view rushes of the day's work.

Altman intended to build the set for McCabe & Mrs. Miller while he was shooting the movie using local carpenters dressed in period costume. If the workmen walked through a scene while the cameras were rolling they wouldn't look out of place. Shooting in chronological order, in a cinéma vérité-documentary style, the Pacific Northwest mining village of Presbyterian Church grows before our eyes as the story unfolds.

The look and feel of the film had to be authentic and a lot of that overall esthetic Altman attributed to his "brilliant" art director Leon Ericksen. Ericksen, who had also worked on Dennis Hopper's epic Peruvian escapade The Last Movie during this period, was instrumental in creating what Altman wanted.

Everyone in the cast received period clothes from the Warner Brothers wardrobe department and they were expected to live in them for the duration of the four-month shoot. In the case of the carpenters on set that unique fashion sense extended well past the production as some of them were reportedly still wearing McCabe-like garb when they went to work on Al Clapp's Habitat Forum in 1976.

The carpenters, including Maplewood Mudflats residents such as Dan Clemens, Ian Ridgway and Ross Garrick, worked under the group name DeLuxe at the tail end of the '60s and into the '70s. Leathersmith Davy Joel Rippner, who was also one of the seasonal renovation crew, says Ridgway was the most skilled woodworker and schooled the others in the carpentry trade. The DeLuxe gang used recycled materials (from buildings such as Victorian teardowns on Seventh Avenue in Vancouver) in building new projects and that esthetic was carried over into the building of the McCabe set. The town of Presbyterian Church has many of the same features that the DeLuxers used in constructing their homes on the Mudflats including extended walkways between structures. The carpenters and some of the cast and crew lived in the hand-hewn structures on the set during filming.

Others involved in the production found off-site digs. Cinematographer Zsigmond rented an apartment overlooking the ferries at Horseshoe Bay. He worked closely with Altman creating the film's visual world. The director wanted the scenes to look as if they were shot in the 19th century. Unbeknownst to the studio they decided to "flash" the film negative before shooting to fog the imagery and give it an antiquated look.

To keep their secret under wraps Altman used a Vancouver lab to process the film and blamed local incompetence for any perceived problems assuring Warner Brothers they could fix things later. He also rented a studio at Panorama in West Vancouver to view rushes after the day's shoot just down the road. Mike Nichols was there at the same time making Carnal Knowledge with Jack Nicholson and Ann-Margret.

Beatty and Nicholson, who became lifelong pals, actually were introduced at one of the nightly parties Altman hosted during the shooting of McCabe.

Three songs from Leonard Cohen ("The Stranger Song," "Winter Lady" and "Sisters of Mercy") were used in the film but were not added until the editing stage. Initially Altman wanted all the music on the soundtrack to be played by musicians in the film and only decided to use the Cohen material after he finished shooting but before editing began.

Warner Brothers wasn't too keen on using Cohen's songs as the music had been released on his label Columbia Records. They didn't want to put out more money for the tracks and offered to find a similar artist from the Warner Brothers roster. Altman wouldn't consider that option and approached Cohen himself. The musician happened to be a big fan of Altman's, after having seen Brewster McCloud, and gave him the songs and signed over future royalties to the tunes once McCabe came out. He also went into a studio and recorded additional instrumental guitar tracks to be used in the film.

When the temperature dipped below freezing one day Altman had special effects people hose down the town to create a sheen of ice over everything.

It started snowing heavily as the production was moving into the final days of shooting. The 20-minute denouement, featuring a fire in the town church and a gunfight, was shot over nine days during and after the heavy weather. There's a production shot of Altman up to his waist in snow directing a scene.

Zsigmond tells Mitchell Zuckoff in Robert Altman: An Oral Biography (published in 2009) "That was the part at the very end when he decided not to flash the film. In the snow. Think about it - the whole movie is basically like a pipe dream, a fantasy, and now we are real, now McCabe is in danger. And that's what happened. It becomes very stark, not hazy anymore, not foggy. It's real."

In the audio commentary released with the McCabe DVD, Altman says that after the film was released filmmaker Stanley Kubrick contacted him to find out how they had lit a particular scene where Beatty lights his cigar. His answer was classic Altman: "I have no idea how we did it. We weren't really going for it at the time. It just kind of happened."