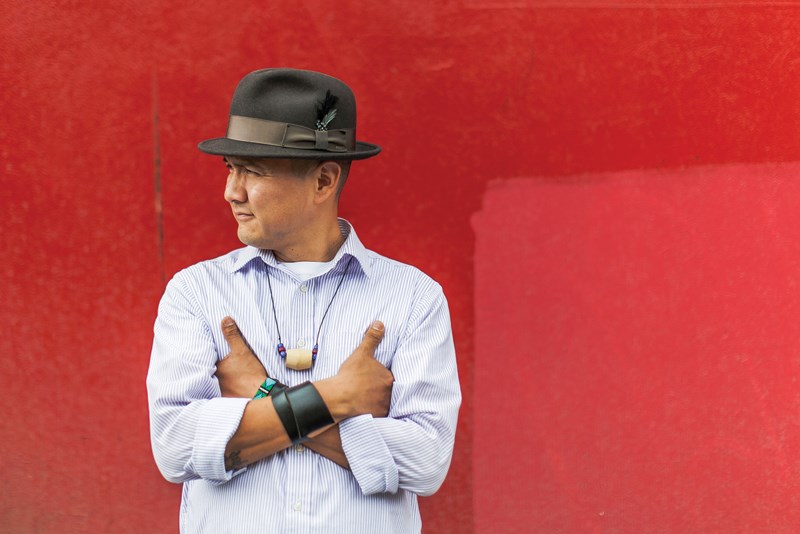 From a female form being “Silently Suffocated” in a woven dress and face mask, to hip-hop spoken-word performances, to a cathedral-like area draped with tendrils of dreamcatchers where visitors can offer prayers to the victims of the deadly drug fentanyl, the new exhibition at the Bill Reid Gallery of Northwest Coast Art is at once eclectic and evocative.

Intangible, which is on display at the downtown Vancouver space from Sept. 13 to Dec. 10, showcases a diverse collection of Coast Salish works by six artists, including two with North Shore roots.

Tracy Williams (Sesemiya) is a member of the Squamish Nation who crafts art pieces from the perspective of a “gatherer,” channelling her passion for plants, animal fibres and wild food into unique pieces, such as a pair of “forest fairy shoes” made from fish skin leather.

“For her, it’s all a learning process. She’s always out on the land, reconnecting, trying to live the way her ancestors lived, and hopefully learn the same things that they learned from being on the land,” says Sharon Fortney, the guest curator for Intangible.

Williams, along with her husband and four children, has spent years learning the ways of the Squamish Nation people, and is always conducting experiments with local plant, animal and mineral resources to rediscover recipes for dyes, greases and paints.

“I have been a basket weaver for over 20 years and descend from a long line of weavers,” says Williams. “My husband Xwepilkinem has been growing his knowledge around hunting.”

In fact, wool from wild mountain goats he hunts is used in Williams’ textile art, although she initially found the process of gathering it, or removing it from the hide, and processing it was a lost art, noting it had been about 100 years since anyone had spun mountain goat wool.

“There was really no one left to ask,” she says. “Who knew how to do these things anymore? Who was practising? Who had escaped the devastating impacts of Indian residential schools? Colonization? Ministry of Children and Family Services?”
In the end, “Spirit became our teacher,” she says, and she was able to glean knowledge from memories of the children who were descendants of hunters and weavers.

Williams is keenly aware of the feeling of “being swallowed” by the urban landscape.

“The way of our ancestors is important,” Williams says. “The pathway that we choose matters to future generations. If we want our children to value the land, rivers, oceans, mountains, animals, and plants, then we must remind them of the blessings that we receive. We must teach our children the meaning of wanáxws (respect) for all things.

The artists featured in Intangible are fascinating storytellers, including Aaron Nelson-Moody, also a Squamish Nation artist and master jeweller also known as “Splash” who lives and works in North Vancouver.

“Most of my work is to reclaim aspects of the culture of innovation, of creativity, interdependence and also self-reliance,” he says.

His most recent passion is repousse, the art of hammering metal into relief from the reverse side.

“I like to use copper since it is part of our territory and it is mentioned in our traditional stories. It is found in some of our really old spiritual objects as well.”

The tale behind his art piece, “One Bullet,” is captivating. Featuring copper masks and deer “horns” made of basswood, it was inspired by his grandfather’s recollection of a particularly brutal winter.

The patriarch of a family of 13 children was snowbound in their small home in Squamish and food was running out. He had one bullet left, and hiked up into the hills to search for prey, although his father told him there would be no deer. Still, he hiked all day, and came upon a herd. He sat still with is rifle, the hammer pulled back, well into the next day, waiting for the right moment. When two deer crossed their necks to feed at the same time, he shot them through with the one bullet. The bounty saw the family through the winter.

Artist lessLIE (Leslie Sam) of the Cowichan tribe pushes the boundaries – and perhaps some corporate buttons – with his striking serigraph prints that integrate the iconic logos from McDonald’s, Starbucks and the Canucks, with aboriginal symbols such as salmon and other resources.

“Are we all Canucks?” Sam asks. “Would these corporations even exist without Indigenous cultures?”

Roxanne Charles, a member of the Semiahmoo First Nation in Surrey, tackles aboriginal women’s issues through a variety of mediums, including fibre weaving. Her striking installation “Silently Suffocated” features a female form – including the face – cloaked in cedar weaving.

The piece, says Fortney, represents both how invasive species are slowly taking over the land, and the silencing of Indigenous women’s voices.

Charles also created a glassed-in prayer area in the gallery to offer support to those suffering with the ongoing fentanyl crisis.

Intangible additionally features the work of Marvin Oliver, a Quinault / Isleta Pueblo sculptor who works in cedar, bronze, steel and glass, and Ostwelve (Ronnie Dean Harris), who was born in the Sto:lo territory of B.C.

Harris uses spoken word, hip-hop rhyme and filmmaking to explore what it means to be an indigenous man in modern culture.

Harris says he uses media to “totemize” his Indigenous roots.

“We used to gather, around our fires, or in our longhouses, or in our lodges, and we had understandings, that came to us, we’re like, okay this is how it is to be … so our people totemized it – sing it, dance it, paint it, carve it, weave it, make it into a spoon, eat out of that understanding, paint it on the wall…”

Pointing to his film that is playing on a screen on a gallery wall, he explains how he bridges that ancient method of understanding the world with multimedia.

“This is me totemizing just the understanding of what I know about the intangible nature of Coast Salish art and design, in this medium, in this basket, which is the video, the stars being the story that I tell people.”

As a performer, Harris has toured the world, opening for rappers Snoop Dogg and Coolio early in his career. He currently works with kids at-risk in the Vancouver and Surrey school districts.

Ostwelve from Kate Hennessy on Vimeo.

Beth Carter, curator of the Bill Reid gallery, urges visitors to Intangible to abandon any pre-conceived notions they may have of “Coast Salish art,” as each artist featured comes from a unique background and perspective.

Perhaps the spirit of the exhibit can best be summed up by artist Tracy Williams: “The way of our ancestors is important. The pathway that we choose matters to future generations. If we want our children to value the land, rivers, oceans, mountains, animals, and plants, then we must remind them of the blessings that we receive. We must teach our children the meaning of wanáxws (respect) for all things.”

The Bill Reid Gallery of Northwest Coast Art is located at 639 Hornby St. Intangible, sponsored by The Audain Foundation, runs until Dec. 10. On Sept. 16 at 2 p.m., join four artists, including Ostwelve (Ronnie Dean Harris), for a panel discussion. On Oct. 1 at 2 p.m., bring the family down for fun activities as part of Vancouver’s Culture Days.