Ghost Passages of the McKenzie Shipyard: An Exhibition by Tracy McMenemy, Jan. 7-April 3 at the Vancouver Maritime Museum. Reception: Thursday, Jan. 14, 6-9 p.m. tracymcmenemy.com It felt like everyone had just gotten up and left.
Dec 31, 2015 10:00 AM By: Erin Mcphee 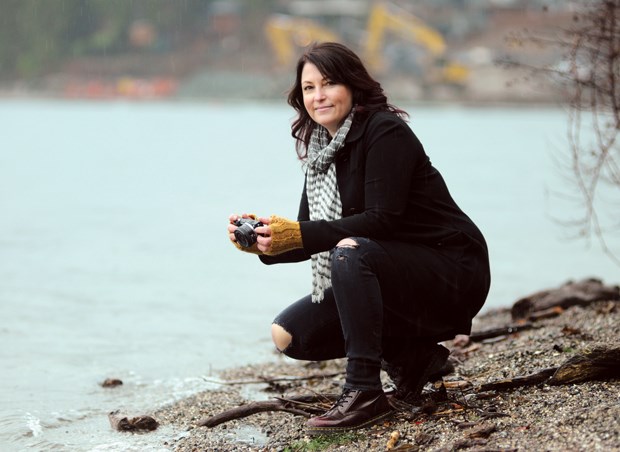 It felt like everyone had just gotten up and left.

Having jumped at an opportunity to photograph the McKenzie shipyard, located just west of Cates Park, a day prior to its demolition to make way for a new condo development, mixed-media artist Tracy McMenemy was completely taken by what she saw.

Things were sitting still. There was clothing hanging on hooks, open notebooks on tables, blueprints lying around, and a chair sitting out on the dock as if someone had just had lunch on it.

“It felt almost apocalyptic,” says the North Vancouver artist who maintains a studio in East Vancouver.

“I got goosebumps a couple of times when I walked through some of the spaces. You could certainly feel the energy of the people that worked there. That’s what you’re looking for as an artist is that connection and it was there in spades,” she says.
According to McMenemy, McKenzie Barge and Marine Ways was launched in 1932. Bustling in its heyday building ship and tug boats, since the late-1970s, operations were downsized and the company was primarily focused on things like repairs and painting. The shipyard remained operational until the day in August 2014 that McMenemy went in to conduct her self-described “material investigation,” photographing, documenting, archiving and collecting various objects from the site. Today, waterfront townhomes and apartment residences are being built on the site.

McMenemy went on to spend a year on a series of works inspired by the shipyard and her resulting pieces are set to be showcased in Ghost Passages of the McKenzie Shipyard: An Exhibition by Tracy McMenemy, opening at the Vancouver Maritime Museum Jan. 7.

“I think it was just the perfect fit for this theme,” she says.

“It’s exciting to talk about the shipyard – as another place that’s disappearing. If we don’t notice these places, the energy, they will be gone the next time we drive by. It’s a reminder to stop and take note, look closer and take time to see what is in our backyard and community. My artist’s resurrection brings the colour back,” she adds.

There were a “couple of strange, serendipitous situations” that led to McMenemy’s McKenzie shipyard project coming into fruition.

Her initial introduction was simply the result of driving past the site for the last decade, along Dollarton Highway.

“It was striking because it was this very beautiful setting with this building on the water. I always wondered what was happening there. Once I started painting, I would imagine myself having a gallery in the front of the building and a studio in the back looking out at the water. I saw there was lots of parking and thought about it very rationally as well as in my imagination. It had always been in my mind as a beautiful spot,” she says.

McMenemy was pleased then when, out of nowhere, in the summer of 2014 she received a phone call from a family friend whose wife, unbeknownst to her, was a member of the McKenzie family. The wife’s father and uncle had been the shipyard’s two owners.

The family friend had long been a supporter of McMenemy’s art, having attended her shows over the years, and had a proposition for her.

“He said, ‘They’re demolishing it tomorrow, can you come in today and do your thing and make a piece for my wife as sort of a memory of her father who had recently passed away?’” she recalls.

In disbelief at the timeframe, McMenemy jumped at the opportunity nonetheless and the next day, grabbed her gear and headed over, spending five intensive hours photographing intricate details of the site.

“I thought I was going to do a piece, but I was just so blown away by everything that I found there and the feelings that I had there. It was really serene with the setting on the water but the actual shipyard was quite ghostly,” she says.

In fact, she had heard rumours about actual hauntings, having been told about a number of employees who’d over the years seen “an old man down at the dock,” yet the man never actually materialized.

“I had a lot of feelings about it so it blew up into a year of my life, working away at it,” she says.

McMenemy will be exhibiting 38 pieces of a variety of types in the upcoming exhibition, showcasing her efforts to blur the lines between photography and painting.

“I basically start with a photograph and then I either use that as inspiration or I actually transfer part of the photograph onto my panel and then I paint after that,” she says.

She’ll also have some three-dimensional works on display, including a 17-foot-tall water line marker and a tool box with art on the inside of it.

The show’s title, Ghost Passages, is a reference to a common theme in McMenemy’s art.

“A lot of the work that I’ve done with abandoned places have something to do with the passage of time, and so I knew that I wanted to have passages in the title and it had that ghostly feel,” she says.

An added significance to her chosen title is that passages can also refer to waterways.

“I grew up as a sailor, so I’ve always been connected to the water. . . . and I think that’s probably why the shipyard caught my attention when we first moved out to Deep Cove and I’d always wondered what had happened there behind those doors. It’s funny you know, you get a phone call and it changes your life. I had no idea I’d spend the last year of my life working on this,” she says.