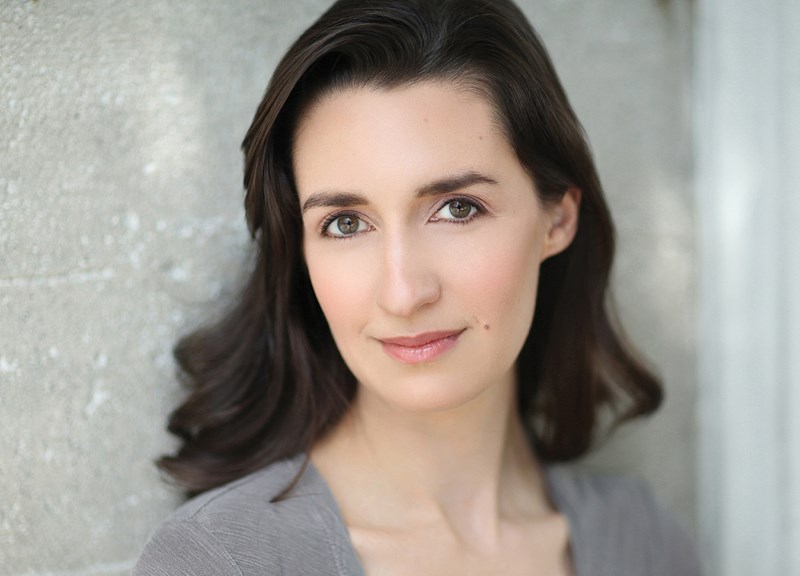 On stage Olesia Shewchuk has performed roles in theatre, operetta and musicals, including The Merry Widow with North Shore Light Opera.Supplied, Karolina Turek

(Note to the reader: for the next few paragraphs the part of the Ukraine will be played by a Marine Drive coffee shop.)

She rises from her seat at Koffee Krazee and starts to sing “Chervona Ruta,” putting down her piping hot tea so she can mime holding the kalyna tree she clutched on stage that night.

At the time she was considering a master’s degree in what seems an unrelated field.

“Quantum chemistry and quantum mechanics it was like, so much fun!” she says.

But that night with the dance troupe she was purely performer.

She was far from Winnipeg geographically but culturally speaking it was just down the road from her hometown.

“Just being in Ukraine for the Ukrainian people,” she says. “The audience literally … stood up with us!”

That standing audience may have changed her life.

As valuable as she held scientific research to be, the budding quantum physicist knew from that moment Schrodinger’s cat was out of the bag.

“That had an effect on me to realize how art can really fuel heart … how art can make a difference,” she says of that performance.

Schewchuk is currently getting set to tackle the works of Gilbert and Sullivan (but mainly Sullivan) with the Vivaldi Chamber Choir.

While Gilbert’s quotations are better known (“I can trace my ancestry back to a protoplasmal primordial atomic globule.”) Sunday’s concert is about Sullivan and the 40 years he spent making music for both the Savoy and Savior.

While even Gilbert and Sullivan’s Mikado is occasionally staged, Sullivan’s sacred music “gathers dust today,” noted a release from the Vivaldi Chamber Choir.

But the choir is looking to change that with the first Canadian performance of Sullivan’s Festival Te Deum, which he wrote for the Prince of Wales Albert Edward in 1872. Perhaps not wanting to reach out to one of Gilbert’s rivals, Sullivan instead availed himself of texts dating back to the fourth century.

“I have been in choirs for my whole life. This choir is something special,” Shewchuk says.

In addition to performing religious music, she’s eager to wrap her voice around a “mouthful of words,” from three Gilbert and Sullivan musicals Sunday.

“There’s theatrics involved, too. I just can’t see why someone wouldn’t want to come.”

Upon arriving in Vancouver Shewchuk set to pursue an actor’s life.

She laughs when asked about the challenges of making a living.

“Luckily I’m married to a very supportive husband,” she says, explaining she believes herself to be on a “path to mastery of the craft.”

When asked about her childhood raised by a band teacher and an economics professor, she immediately summons the image of the piano that was the centre of the household.

“I played piano, I danced, it was such an enriching childhood that my parents exposed me to,” she says. “I loved school, I loved everything.”

It quickly becomes apparent that Shewchuk generally occupies a plane of existence where Murphy’s Law does not apply, where the glass is full and the grass is exactly the shade it should be.

“I like to try to take the positive,” she says.

While she acknowledges that a working actor – when lucky – undergoes a series of job interviews each month, she sees the bright side.

“When I can give it my all and if I’m happy with what I gave in that interview, in that audition … that gives me permission to let it go,” she says.

No such audition was required for Sunday’s matinee performance.

Edette Gagne, artistic director for the Vivaldi Chamber Choir, had previously cast Shewchuk to play The Merry Widow and thought she could be a good fit for concert.

In preparation she’s doing rehearsals for two shows, going on auditions, staying physically and vocally fit while raising two young children and attempting to get eight hours of sleep.

“It’s like preparing for a marathon. I need to be in great shape,” she says. “A lot of people are depending on me as a soloist.”

But despite it all, fear doesn’t seem to be in her repertoire.

“I love to go on. I don’t get stage fright,” she says. “If I’m at the point where I have prepared my material and I feel ready, I will go out there and be excited to share what I’ve discovered.”