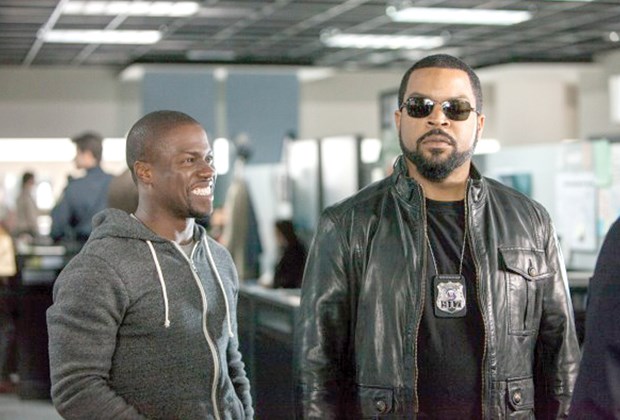 When an unstoppable force meets an immovable object you get Ride Along, the seldomfunny buddy movie starring Kevin Hart and Ice Cube.

Hart is the unstoppable force, naturally. He has more or less trademarked the fast-talking, highpitched tantrums made famous in his standup routines, whether he's gabbing about fighting a much larger club bouncer or storming out on his wife, emasculated by the diaper bag over his shoulder. Here he plays Ben, a high school security guard with dreams of entering the police academy.

Ben might want to become a cop or he just might really need a means to impress his future brother-in-law James (that's Ice Cube, aka immovable object). James is a seasoned Atlanta P.D. detective who is very protective of his sister (Tika Sumpter) and refuses to give the couple his almighty blessing. "I pictured you with someone who plays for the Braves or the Hawks, not the mascot," says James. (Right! because major-league players have such a good track record when it comes to fidelity.) Sure, he's short (Hart is 5'2": search for the pic of him with Shaquille O'Neal for contrast) but apparently Ben makes up for it in the bedroom. His nickname with his girl and his online gaming friends

is "BlackHammer." But James won't quit, calling Ben "a weenie" and "one chromosome short of being a midget."

When Ben gets his acceptance letter from the police academy, James suggests a ride along to give Ben the chance to prove himself worthy of his sister's hand. "Show and Prove," is James' mantra: "show me you're worthy of her, and prove you've got what it takes." It's really an opportunity to make fun of Ben for the day.

James is a hard man. The movie opens with a shootout in a busy public place, with James ignoring all the rules of engagement. He commandeers a vehicle, but is ticked when it's a Prius ("Man, get that bull#!@? out of here") and waits for the Dodge Viper truck instead. Hmm, what else? He wrecks a public market and causes panic just to prank Ben; he fantasizes about shooting Ben, and barely blinks when another suspect is shot accidentally; he ignores all orders from his stereotypically taciturn sarge; he breaks in to Ben and his sister's apartment on several occasions. Creepy.

We'll put aside the irony of former N.W.A. band member Ice Cube playing someone who would trump up a charge of assaulting an officer. His character isn't cool, he's just cruel. He's unlikable. And even a hasty exposition about growing up in foster care can't justify James' attitude problem.

Because of this, Hart has to work overtime to give the movie some character. Sometimes he's annoying and sometimes Ben's earnestness is endearing, but at least he's working at it. The physical comedy is decent; the well-trod cop scenario is not. The boys stumble on some real criminals, some of the good guys are really bad guys, and so it goes. Action is cliché and supporting actors like John Leguizamo are handed regrettable dialogue.

"You 'aint going to like how this movie ends," James says at one point. No kidding. You won't like much of the rest of it, either. Let's hope they can get the balance right for Ride Along 2, already in the works.