"The good life started for me after the war," says one of the North Shore's newest centenarians. In 1945, George Lea married, was demobbed from the Royal Canadian Air Force and returned to his career as an insurance man.
Mar 15, 2015 12:00 AM By: Laura Anderson 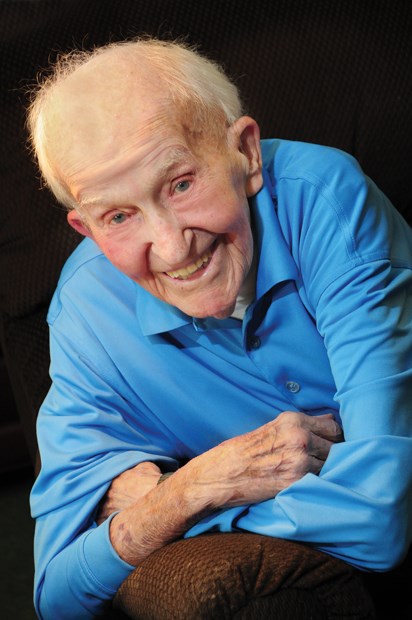 "The good life started for me after the war," says one of the North Shore's newest centenarians.

In 1945, George Lea married, was demobbed from the Royal Canadian Air Force and returned to his career as an insurance man. He and his wife Mary made their home in West Vancouver and raised sons George, John, Ron and Ted.

What was George up to during his first 30 years of life?

He was born on March 10, 1915, and raised with sister Gert, and brothers Norman and Sydney in Fort William, now Thunder Bay, Ont. Father Charles, born in Liverpool in 1885, came to Canada in 1910 and entered the grain industry. His mother, Bertha Ethel Spencer, was the daughter of a sea captain. Born at sea in 1886, she lived the first 12 years of her life aboard the merchant sailing ship Largiemore.

A memory: 1918, the Fort William train station. George is four years old, riding on his father's shoulders, handing out cigarettes to returning soldiers.

Sports - player, coach and referee - run the span of George's life. As a player, he preferred teams with good-looking uniforms.

"The best ones matched my blue eyes," he says.

There aren't many men who can make another of George's sporting claims. Hitched by a rope harness to a plow, he was Fort William's ice rink sweeper, a human Zamboni.

He was glad for the work. All across the country, men were on the road in search of work. Egg sandwiches were all George's mother could give the men that followed the harvest trains carrying prairie grain to the Lakehead.

When George was 21, he waved goodbye to his brothers and boarded the train to start a new life out West. On a farm in Surrey, he milked cows, tended chickens and consumed his share of eggs until an uncle helped him obtain a position with the Union of Canton Insurance Society.

Evenings might find George skating at the forum, where one night he partnered Mary Molyard around the rink. A cup of coffee in a Hastings Street restaurant led to hiking and ski dates on the North Shore and, after seven or eight years and a world war, to marriage in 1945.

During the war, George served in the air force as a navigator and as a front-end gunner, flying into storms on weather reconnaissance missions from posts along the B.C. coast. "I never fired a shot in anger," he says. "The weather was our biggest enemy."

"Mary and I bought our little house right after the war."

The year 1952 saw the arrival of their fourth son.

"After four boys, I was close to having a baseball team," says George, explaining the Leas then moved to a larger house in Ambleside.

In summer, the family went camping. That's if no baseball was scheduled and George wasn't down at Hodgson and Clark's lumberyard on Marine Drive, "with the rest of the fellas, picking up wood for projects, you know."

Winters saw the Leas on the soccer field, at the ice rink and skiing on the North Shore mountains.

The boys moved into their own lives. Wives and grandchildren came along. George retired from the insurance business. In 1993, when he was 78, Mary passed away.

Through his 80s and 90s, George kept active, enjoying family, friends and the outdoor life. With fellow insurance man Alec Swanson, he would ski in to Swanson's cabin on Hollyburn mountain. They would open the cabin, chop wood and light the stove. Limbered up by exercise and Pusser's Navy Rum, the two old friends would make their way to Hollyburn Lodge to socialize, a routine that continued until Swanson's death just over a year ago.

At his centennial celebration, surrounded by a host of well-wishers, the man known in the family as the "living legend" was asked, "What's the secret of long life?" George smiled. "The secret of life is a secret," he said.

George's secret, his sons suggest, is empathy and understanding, resilience in the face of trials, and determination to find the best life has to offer. These qualities, life's great gifts, George Lea has shared generously for 100 years.