Watering woes a thing of the past 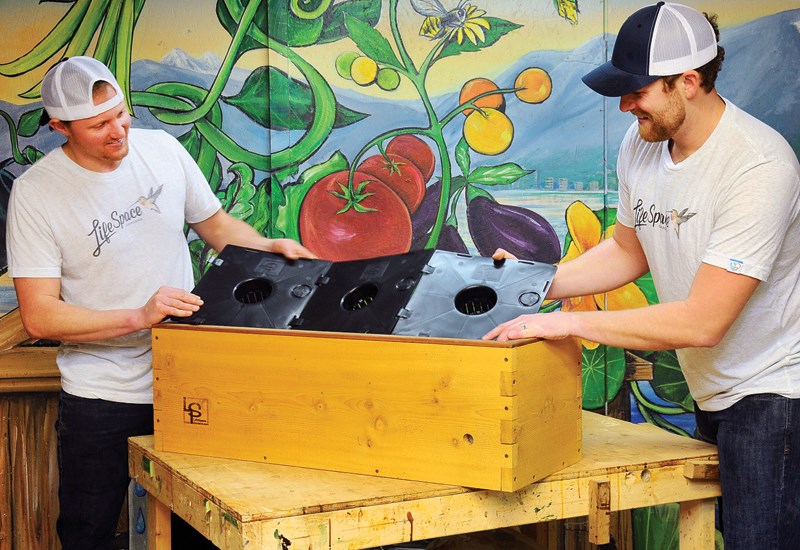 “You get success that first time and boom! Then you’re hooked,” notes Wesley Hooper.

The co-founder of LifeSpace Gardens in North Vancouver explains that although conditions on the North Shore are conducive to growing food year-round, the vast majority of vegetables and produce residents eat are imported from other countries.

“It’s absurd,” says Hooper. Especially so in an area that prides itself on moving toward more green and sustainable systems. Having to rely on imported food may not be sustainable in the long-term. “It’s scary is what it is,” Hooper adds.

Although he recognizes the need for more homegrown greens, Hooper also knows growing food is not something everyone can do easily.

That’s why he and his business partner Cooper Pantages designed a series of urban gardening solutions to try to make it a little easier.

The idea to start a company was partly based on the pair being young and ambitious and wanting to do something “cool” that had an impact on their community.

“Helping people to grow food is one of the best ways to do that,” explains Hooper.

Asking around, they discovered one of the hurdles to regular home gardening and growing was watering.

“It’s something you have to do a lot of particularly in the summer,” says Hooper, who calls himself a natural problem-solver. He started thinking about a possible solution and wondered if he could create an environment that would address watering concerns so that more people might be more willing to give gardening at try.

After a multi-year process of designing, building, and eventually going through a patent application, the company’s self-watering system was born.

It started with a more rudimentary technique and was refined to its current design that features ready-made and custom-built cedar garden boxes fitted with food-safe waterproof liner that creates a separation within the garden where the soil is on top and the water is underneath.

“What this does is it just mimics the natural water table and it allows the water to wick up from the reservoir into the top soil naturally,” explains Hooper.

The main advantage of their garden design is that it reduces the watering frequency from every day to once a week or less, he adds.

One popular feature of the design is its ability to tie in the downspout from a gutter system to the self-watering system so that every time it rains the rain water fills up the reservoir. Hooper says their self-watering system is more efficient than traditional top watering because it provides a consistent moisture level to the soil and creates a good environment for veggies to grow.

“It’s a fairly ancient technique,” explains Hooper, noting the Egyptians were using the same basic principles in gardening about 3,000 years ago.

“What we did is just take that principle and adapt it for a modern, urban environment,” he says, adding they simplified it, making it easier to use with higher functionality. “Now it’s off and rockin’” says Hooper.

LifeSpace Gardens sells condo farms – small-space gardens for balconies, patios, rooftops – as well as do-it-yourself flat packs (a three-foot-by-three-foot garden that gets shipped in a box and can be put together as a family project). The company also does custom installations and have built rooftop and backyard gardens. They also work with the Edible Garden Project and North Shore Neighbourhood House, have created gardens in schools and daycares across the North Shore, and built the new community garden in Ambleside. Last year, the company received the Young Entrepreneur Award from the North Vancouver Chamber. “That’s the sign of the times. People are really starting to pay attention to the importance of growing food because it’s a problem that’s not going away,” says Hooper of winning the award. Both Hooper and Pantages have a background in custom carpentry and Hooper says the company tailors garden plans to the space their clients have to work with.

“It’s important to grow what you can with the space that you have,” he says, adding for him a key element of the process is providing clients with the experience of watching their food grow, which he calls a “fantastic experience.”

“It’s a great feeling. So many people miss out on that connection with their food,” he adds.

LifeSpace Gardens will be one of the exhibitors at the BC Home + Garden Show Feb. 22-26 at BC Place Stadium. Hooper says the company will officially launch a new free educational platform called projectgarden.ca at the show. The site features “small, easily digestible videos that take the viewer from planting through to harvest.”

For more info about the home and garden show or to buy tickets visit bchomeandgardenshow.com.