Another holiday season tradition in Vancouver has been put on ice this year due to the ongoing coronavirus pandemic.
Oct 29, 2020 1:30 PM By: Lindsay William-Ross 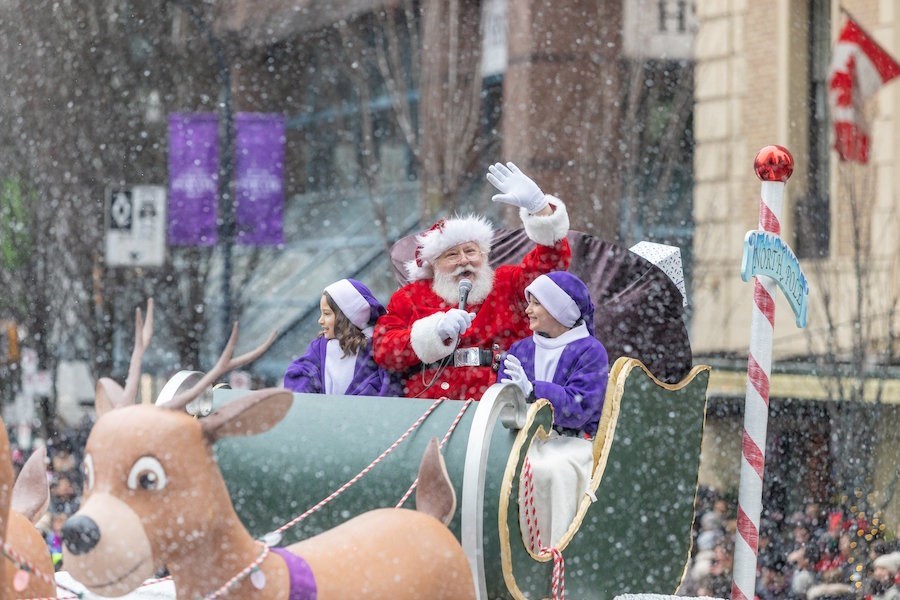 Another holiday season tradition in Vancouver has been put on ice this year due to the ongoing coronavirus pandemic. The 2020 Vancouver Santa Claus Parade has been officially cancelled.

Organizers say they have spent months looking into alternate ways to present the popular longstanding event held on the streets of downtown Vancouver each December, however they wound up opting to put the parade on pause this year.

The Vancouver Santa Claus Parade Society has delighted hundreds of thousands of people during its 16-year run, with onlookers of all ages gathered on crowded city blocks on the nearly two-kilometre route.

The festive event, featuring the show-stopping arrival of the jolly man in the red suit himself, not only gets the Christmas season going in the city, but also doubles as an opportunity to cull donations for its beneficiaries, the Greater Vancouver Food Bank and the CKNW Kids’ Fund. The parade also features an array of dancers, marching bands, floats, and appearances by civic leaders and local mascots.

Supplemental events held on parade day include a breakfast with Santa at the Fairmont Hotel Vancouver, photos with Santa at TELUS Garden, and pre-parade entertainment at Christmas Square at the Vancouver Art Gallery plaza; all of those events have now been cancelled for 2020 as well.

Parade among many cancelled holiday events this year

Holiday events around Metro Vancouver are now having to decide if the show - or lights - can safely go on. So far, the Festival of Lights at Vancouver's VanDusen Botanical Garden will take place with distancing measures, however, Coquitlam has opted out of hosting the free Lights at Lafarge event this time around due to crowding concerns.

Hope remains strong for events like the Santa Claus Parade to return next year.

"The health and safety of our participants and spectators will always be our highest priority," adds organizers of the Vancouver Santa Claus Parade. "While current guidelines for public gatherings preclude us from staging the parade this year, our hope is to return in 2021, when we can better ensure the health and safety of everyone involved."

Learn how to make traditional Irish soda bread at this year's CelticFest Vancouver
Mar 1, 2021 8:10 AM
Comments