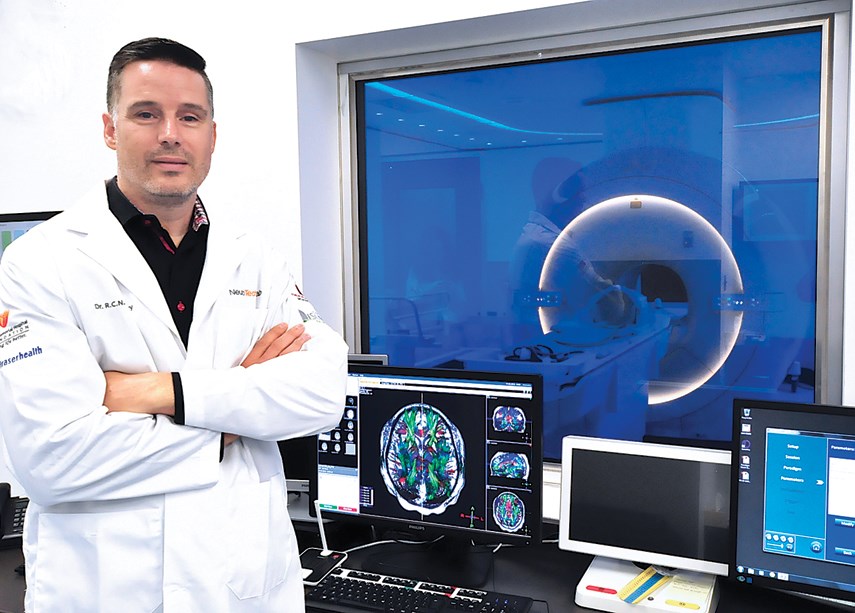 It’s the most intimate of conversations: the one between music and the brain.

The impact of melodies on the mind has been rhapsodized and theorized but now, North Vancouver neuroscientist Ryan D’Arcy is hoping it can be quantified.

“You don’t have to be a neuroscientist to know that music plays a really, really important role in our brains,” he explains.

D’Arcy is principal investigator of a recently-begun study that delves into the impact of music on mental health and brain function. The investigation, a collaboration of Music Heals, Simon Fraser University and the Health and Technology District in Surrey, marries the work of musical therapists and neuroscientists.  While therapists sing or play instruments with adult patients suffering chronic mental health challenges due to post-concussion syndrome, D’Arcy and other neuroscientists use MRI scans to gauge neuroplasticity of those patients and essentially get a window into the brain on music.

The second phase of the study focuses on the brainwaves of children who have mood-related disorders stemming from childhood traumas, monitoring the effect of music therapy on their mental and cognitive function.

The study is meant to look “across the lifespan,” D’Arcy says.

Driving home from Surrey on a rainy Friday afternoon, D’Arcy reflects on his work in neuroscience.

Originally from Williams Lake, D’Arcy was compelled by biology and physics and curious about the brain. Becoming a neuroscientist, however, was not exactly a well thought out plan.

“Nothing I’ve ever done has been anything but just a heck of a ride of good fortune and fluke,” he says.

As co-founder of the Health and Technology District, D’Arcy spent two years measuring the brain activity of Minnesota junior hockey players. The study shed light on both the times it takes to heal after being knocked unconscious as well as the importance of an objective rinkside test for concussions.

The music therapy study is an attempt to build on those findings by understanding what happens to the brain after concussions and why some patients live with headaches, dizziness and sleep problems similar to those suffered by people dealing with depression, anxiety or post-traumatic stress disorder.

D’Arcy likens the study to a first stage rocket booster.

“We hope that we can create enough evidence where it becomes a no-brainer that you’ve got to include this in your forms of treatment,” she says.

People use music to celebrate or commiserate, she notes.

“We all can think about going through a bad breakup and listening to Amy Winehouse on repeat,” she says. But the research is an attempt to get the “hardwired proof” of music’s effect on the brain, she says.

Music has been a method for holding onto stories through centuries. Epic tales that survive the ravages of time often endure because they can be chanted or sung from one generation to the next. When dementia robs our memories there are sometimes songs the disease doesn’t touch.

The study may offer objective evidence about music therapy, which could also allow music therapists to see how their work changes brain activity, what works, and what doesn’t.

“We will be able to learn the ways that we can tap into neuroscience to help better guide the treatment,” he says.

Ideally, he says, music therapy will evolve to a point where songs can be given to patients like pills.

“What if,” D’Arcy asks, “music therapy was a prescription?”

Songwriter Irving Berlin once wrote, “the song is ended, but the melody lingers on.” The study is an attempt to comprehend just how those melodies linger.

“If you can see it in science . . . that makes it an objective demonstration that this is working,” D’Arcy says. “Music is very powerful. We all know that and it’s been right in front of our face the whole time.”