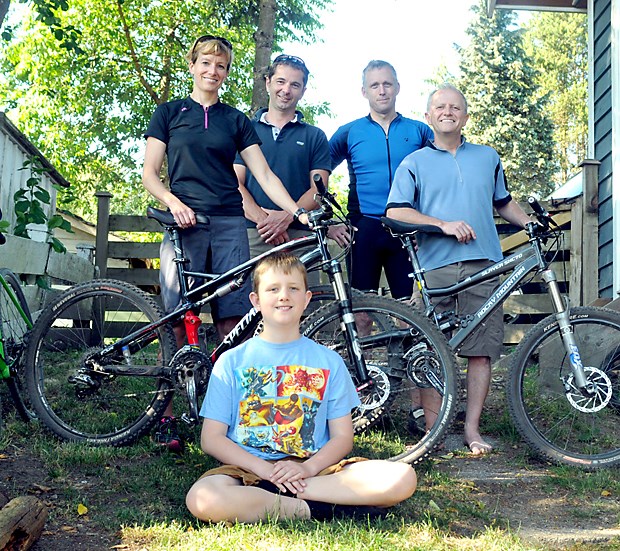 A North Vancouver father is teaming up with friends and neighbours to fundraise for a non-profit organization close to his heart.

Long an avid mountain biker, John Taylor, 48, has participated a number of times over the last 15 years in the Squamish Test of Metal.

This year's edition of the cross-country mountain bike race, featuring a mass start of 1,000 riders, challenged to traverse a 67-kilometre course with more than 1,200 metres of climbing and 35 km of single-track, is being presented Saturday, June 20 by Nesters Market.

In the last few years, Taylor rode the event as part of a Canadian Diabetes Association fundraising initiative. Not offered this year, and maintaining an interest in using the event to promote a good cause, he jumped at the opportunity to do his own thing and fundraise for Friend 2 Friend Social Learning Society. The non-profit organization was founded by North Vancouver's Heather McCracken with a goal of fostering play and friendships for individuals on the autism spectrum.

Taylor's son Aonghas, 11, has autism and has been involved with Friend 2 Friend over the last five years, supported through a variety of programs, including their Autism Demystification Programs and Friend 2 Friend - Integrated Play Groups. Both saw staff members come into Aonghas' school, Dorothy Lynas elementary, and effectively work to forge connections between him and his classmates.

"It's been a good class and I think Friend 2 Friend has been a big part of it, because they're very understanding of him, they're friends with him. It's great to see," says Taylor.

Proceeds raised by the team (rounded out by members Chris Little, Dean Kramaric and Darin Nevin), will support Friend 2 Friend's growing efforts to serve local children through ongoing programs as well as at its Vancouver Play Centre and upcoming second location, set to open in New Westminster in September.

To support Taylor and his team's fundraising efforts, visit friend2friendsociety.org/test-of-metal-fundraising-event.