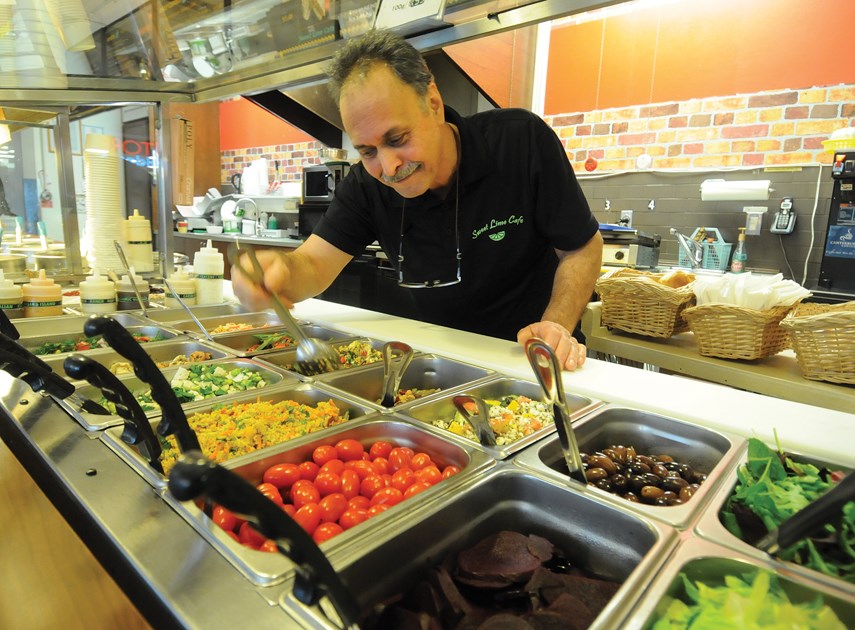 I recently managed to feed made-from-scratch, good quality dinner at a local deli to my family of five for $55, all in.

The meals were prepared with the speed of a fast-food joint, but bore no resemblance to the over-salted, greasy and health destroying fare of the iconic franchises that dominate that space. Our meal of deli standards boasted fresh flavours and comforting, tried and true combinations of ingredients, especially in the soups, which were far and away the stand-outs.

The trade-off for this reasonably priced meal was a nondescript, no-frills dining environment that felt like a cross between a corporate cafeteria and an economy hotel diner, as well as tepid, though highly efficient, service from someone who had clearly had enough guests for the day.

Sweet Lime Café has been operating out of the southwest corner of Capilano Mall for the better part of two decades. While most traffic hurries right past the venue in search of fruit, bread, and alcohol from businesses that operate within the mall, as well as signature “low prices” on virtually everything else from that unstoppable, big box retailer that is a black hole to independent enterprise, Sweet Lime holds its own with a loyal local clientele that is greeted by name (most times that I have been there) by the Café’s long-time owners.

Now look, we all have bad days. I am thankful that in my line of work I don’t have anonymous critics showing up to evaluate my every key stroke and report my verbal deficiencies to thousands of readers. However, the restaurant industry is one of those rare forums in which, sadly, employees are not really afforded “bad days.” At least not ones that go unnoticed. Yelp is essentially an archive of disgruntled diners that have born witness to restaurant employee transgressions.

Years ago, when I worked in the industry, the aluminum cabinet in which we kept table linen was marked with knuckle impressions left by enraged employees (me included) who had bitten their tongues following vexing guest interactions and sought primal release in the sanctity of the back-of-house service station. I often wondered what guests must have thought of the muffled slamming sound that still permeated the dining room from time to time. At Sweet Lime, the staff frustration was evidenced in a much subtler way, as guests standing not six feet away from the sole employee on shift had to ring a bell for service even though they had been discussing their menu selections for quite some time behind her. Another guest ultimately left without ordering as she grew weary of attempting to garner the privilege of service. My instinct is that Sweet Lime’s sweet spot is lunch, when the crowds are fuller and the beef donair offering is still available (I was not successful in securing one of these elusive specialities, I’m afraid, as the café had sold out of them by the time I visited with my family and a subsequent, solo attempt to try one the following Saturday revealed that they are not offered on weekends at all).

The aforementioned soups supplied the meal’s warmth and were a hit across the boards, even with our three-year-old daughter who does not have what I would describe as an adventurous palate. She split a small soup, which came as part of the well-priced combo that included a ham and cheese panino, with her older sister Blondie. The soup, billed as Persian Noodle, was a thick and hearty, subtly spiced creation with spinach and sabzi (the traditional Persian herb blend found in much of the cuisine, offering fragrant and slightly sweet notes) and fat, tender noodles. The Boy also enjoyed a melty, crispy ham and cheese panino, one of four panini on the menu, but for his side of soup he chose Spicy Red Lentil, as did my wife DJ. Their soup was the best of the lot, packing some decent spicy heat and a winter appropriate, stick-to-your-ribs texture. DJ went old school on her main, opting for egg salad on sourdough, which was exactly as it should have been: a simple, fresh and tasty sandwich that inspires nostalgia for the school lunches of childhood.

My soup, which accompanied my Chicken Caesar Wrap, was a chunky spinach and tomato, again nicely executed, comforting and filling with its large cubes of tomato and weighty spinach texture. My wrap, made to order with a generous portion of tender white chicken meat and ultra fresh romaine salad in a garlicky dressing with parmesan, would have been very good had it not been topped with a ludicrous amount of synthetic bacon bits. The “facon” had an insidious, pretend smoky flavour and tooth challengingly crispy texture and frankly felt completely out of place in a venue that goes through great pains to make everything else from scratch. I would happily have forfeited the inclusion of this attempt at bacon had I known it was not to be the real deal and I would urge the café menu developers to reconsider; if the labour and food cost required to supply real bacon is prohibitive, I would suggest a Caesar wrap is not lacking in its absence. Chips and bottled beverages rounded out our meal.

Rotary Ride for Rescue invites cyclists to climb Cypress over next month
May 13, 2021 12:49 PM