Sweet Lambo with a ski box spotted outside Tim Hortons

The Lamborghini, complete with a ski box was photographed parked outside a Vancouver Tim Hortons restaurant
Jan 15, 2021 8:08 AM By: Cameron Thomson 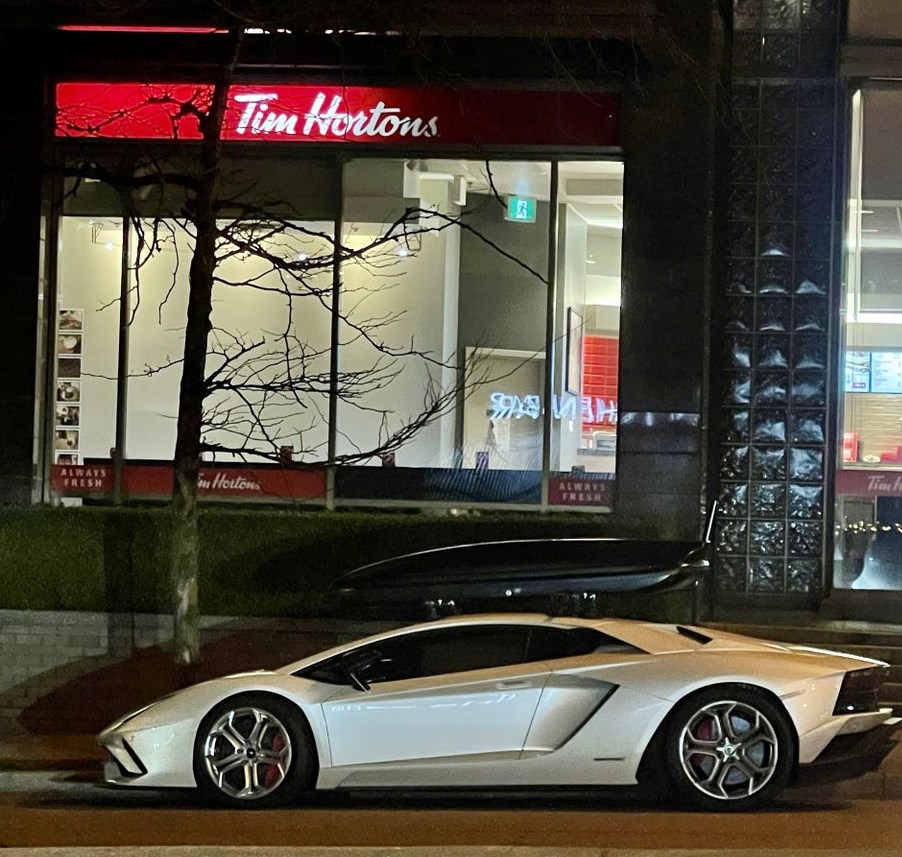 A Reddit user recently came across this incredibly Vancouver scene, a supercar with a ski box parked outside a Tim Hortons.Reddit user scaredym00se

What is quintessential Vancouver? One’s mind might conjure up images of skiing and half-million dollar supercars crawling through Vancouver traffic just to pick up a double-double from Timmies.

It is this trifecta that Reddit user scaredym00se came across recently and snapped a photo for the world to see.

“Just about the most Vancouver thing I’ve seen in a while: a Lamborghini with a ski box parked in front of a Tim Hortons,” scaredym00se wrote.

The car, a white 2017 Lamborghini Aventador S, was also rumoured to have made the trip to Cypress Mountain in the comments underneath the widely upvoted image.

Aside from the car itself, the ski box garnered the most attention from commenters.

“I imagine the rack installer guy was like... ‘Uhh... I mean, it's possible, but are you really sure about this? Yeah? And you are sober right? Okay... I'm going to need you to repeat the request in front of my boss first just to have a witness here before I do this to this car,’” wrote BobaVan.

Commenters were quick to point out the one thing that would make the image even more ‘Vancouver’ is a bright green N sticker, perhaps turned on its side to make it an infinitely more edgy Z sticker.

Other Reddit users questioned how a supercar with 691 horsepower capable of a top speed of 350 km/h would keep a roof box on top of the car at all. The practice is not as uncommon as one might think with another Redditor pointing to the Koenigsegg Agera R, a 1,100 horsepower hypercar which comes with a roof box straight from the factory.

Still more Reddit users commented, voicing their approval that the Lamborghini would be able to stretch its metaphorical legs (pistons?) on the Sea to Sky highway taking its owner for a ski day.