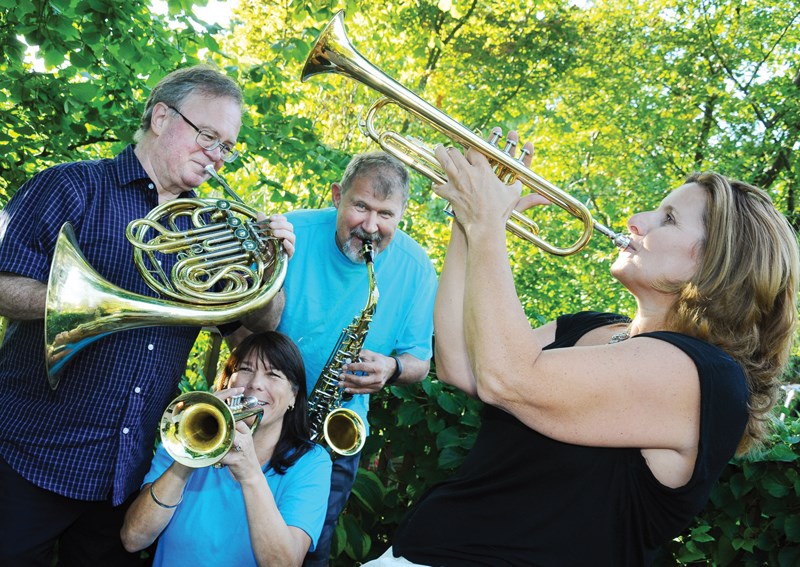 Cornelia Unger showed up to her first band practice with her daughter’s trumpet in hand and a foundation in music that didn’t stretch far beyond the “Every Good Boy Deserves Fudge” mnemonic device children learn in elementary school.

Only by sitting in on her two kids’ piano lessons many years ago did she learn what a treble clef and a bass clef looked like.

“That was the extent of my musical knowledge,” she says.

It’s been almost a year since her first practice with Rising Tide adult beginner band and Unger is now reading music and playing the trumpet at a Grade 5 level. It’s an accomplishment she’s proud of, but she admits it wasn’t easy learning how to play an instrument as an adult.

“I think you come to it with all of these preconceived ideas of what you should be able to do as an adult, whereas I think children just pick up an instrument and play,” she says.
Unger would constantly second-guess herself: Am I playing the right note? Am I holding the trumpet correctly? Do I look like I know what I’m doing?

“It’s almost a process of two steps forward, one step back,” she says, explaining she would master a song, then flip ahead to a more complicated piece in her music book and immediately lose confidence. “Through time, and through the process of practice and learning, you do get better and at some stage you realize that it all comes down to you.”

Presented by the non-profit Second Chance Music Association, Rising Tide is a wind ensemble for adults that launched last year under the direction of Melissa Hammer, who also directs SCMA’s Accidental Jazz Band. The group has about two dozen members and is seeking new players for its second season starting in September. Since existing members, like Unger, now have a year’s worth of experience under their belts, the band is hoping to attract people with some music training – even if it’s just a little.

“We’re looking for those comeback players,” says band organizer Kent Howie, who explains that Rising Tide is a good group for adults who may have played an instrument briefly in their youth and want to pick it up again. If there is enough demand from people with zero musical experience, though, Howie may consider starting another band for complete beginners. “If the interest is there, we’d certainly run another program.”

“From a social, emotional and psychological aspect, it’s extremely powerful,” he says. “Music itself, and learning it, it’s like a language, it fires all aspects of the brain.”

He already plays the trumpet with the West Vancouver Pops Band, so he opted to take up a percussion instrument with Rising Tide to fit in with the other novice players.

“I just think it’s really cool to be around people who are willing to risk making bad noises,” he says. “It’s about getting people to be willing to do something that’s uncomfortable.”

After two years with Rising Tide, the hope is that members will be ready to move on to a more intermediate-level band, such as the West Vancouver Pops Band.

Last year, Unger had the opportunity to sit in on a West Vancouver Pops Band rehearsal and could barely follow the music. “There’s no way I’m ever getting here,” she remembers thinking to herself. “What’s funny now is I can see myself playing in that band in another year,” she adds.

Rising Tide performs two concerts annually, one at Christmastime and another in the spring. Unger, who is looking forward to her second season on the trumpet, says she enjoys the camaraderie and the no-pressure environment that the ensemble provides.

“For somebody who has always wanted to play an instrument, it’s a great opportunity to come out and play with a group of like-minded people who are all in the same boat.”