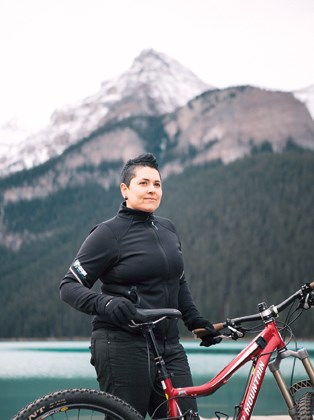 When Debora De Napoli learned she could carry the ovarian cancer gene mutation that took the life of her mother, rather than wallow in the possibility while waiting for the results of medical testing, she decided to take action.

The 41-year-old Vancouver resident set off on a life-changing physical and emotional journey, setting a goal of completing nine summits across the Canadian Rockies on her mountain bike, as well as launched a charity, Life Cycle, intended to raise funds and awareness related to ovarian cancer.

"I couldn't sit still," says De Napoli. "I thought if I got out there and I challenged myself to something way bigger than me. .. it would be good for me too, it would be a healthy way of dealing with grief and processing that stuff," she says.

In addition to her mother, who passed away five years ago at age 67, De Napoli has lost five other family members as a result of the mutation, and her sister is a carrier, adding further motivation.

She encountered a number of bumps along the way, including a serious knee injury on Mount Seymour, requiring rescue by seven firemen, six weeks prior to her departure.

Nonetheless, she completed the series of summits over a two-week period in summer 2012.

"Being a first-time filmmaker and not just the project itself but also the ride and the things that happened along the way, all those speed bumps... it was really challenging. But the challenging parts I think were the good parts because they allowed me to reach out to people who I wouldn't have otherwise known, asking for help," she says.

Having some experience as a recreational mountain biker, De Napoli, a selfdescribed "cubicle dweller," worked to hone her skills through the North Shore's Endless Biking Enduro XC Training Program, under the tutelage of Andreas Hestler and Cynthia Young. As well, she sought help from film industry professionals who were generous with their expertise due to the advocacy nature of the project.

De Napoli is looking forward to FEAT Canada and the opportunity to share her story of personal empowerment, which she hopes provides a unique and strong voice for women within the adventure film genre.