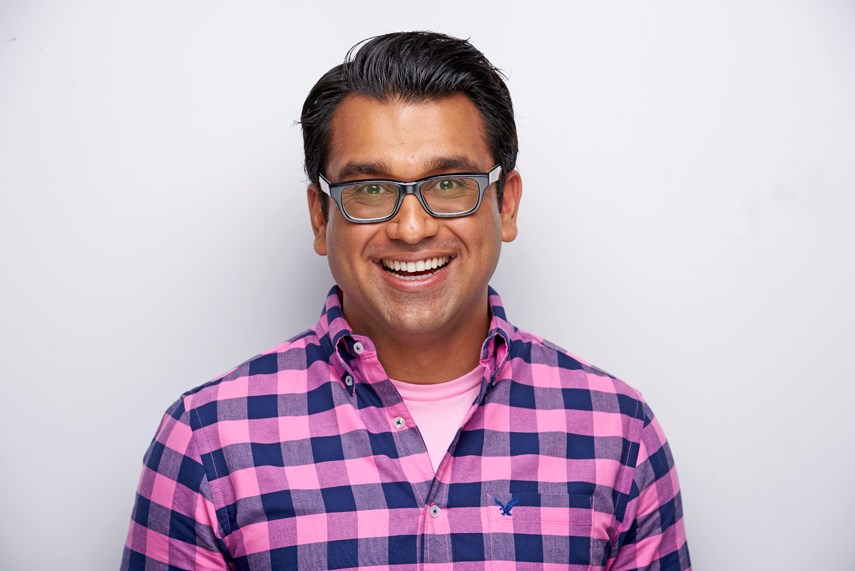 When Mo Amir was in school his annual report cards tended to contain two consistent themes: the first was that he was a good student. The second was that he never shut up.

“I’ve always been super talkative and I’ve always had a keen curiosity in people and what makes people tick,” he reflects, highlighting his days growing up near Deep Cove where he attended Windsor Secondary and now-shuttered Plymouth Elementary.

Those themes from his school days still ring true, though for the last few years Amir, who still resides in North Vancouver, has been happy to let others take part in all the talking as well.

In 2018 Amir launched This is VANCOLOUR, a podcast that follows Metro Vancouver’s growing creative class of artists and activists, journalists and entrepreneurs, as well as politicians and community leaders.

In the show’s introductory episode, Amir clearly lays out his thesis for the project: “I don’t think we give Vancouver enough credit,” he starts. “There is no shortage of people doing amazing things.”

On Nov. 9, This is VANCOLOUR will air its 100th episode, a benchmark number in the world of podcasting.

“It’s weird to think that I’ve done this many so far,” says Amir. “It just kind of crept up on me. This year, despite all the challenges of COVID, I had some big guests.”

Those big guests have included current and former B.C. premiers, local comedians, a death doula and grief guide, a certain Liberal-turned-independent member of Parliament, as well as a former broadcasting icon who entered the world of politics, to list a few.

That’s pretty impressive for someone who just a few short years ago had no podcasting or media background to speak of. In addition to the podcast, he’s also landed gigs as a columnist with Vancouver Is Awesome and as a commentator with CKNW.

I asked BC Premier @jjhorgan about the expiration date on blaming the BC Liberals (“You had sixteen years!”) in a fast-paced #bcpoli episode ahead of Election Day!

Amir moved with his family to North Vancouver from Dubai, by way of Pakistan, in 1989, when he was four years old. During the day, Amir works for the long-running family business in the forestry sector – but it was during one fateful night when Amir’s vision of podcasting became a reality, he admits.

“I don’t know if you’ll believe me, but I literally had a dream I was hosting a podcast. I woke up the next day and was like, ‘Oh that would be so cool if I could do that,’” he says. “To be completely honest, it was pretty much on a whim. I’ve always done passion projects – from mentoring youth, to sitting on the board of a hospice society. I’ve always bounced around in what I’d call extracurricular activities as an adult.”

From the beginning, Amir hoped to further explore his own interest in the social, political and cultural fabric of Metro Vancouver while interviewing the people on the front lines making it happen.

Through his show, he's hoped to fill what he saw as a storytelling gap when it came to long-form interviews that covered big topics – such as structural racism, homelessness, or the opioid crisis – with some of the big personalities there on the ground. And the medium of podcasting allowed for that personal, conversational touch as well.

“I think the ability to sit down with somebody for 45 minutes, an hour, an hour and a half, is a whole different feel,” says Amir. “Because it was a passion project, because there were no stakes, I kept it to what I’m passionate about. I didn’t worry about an audience, I didn’t worry about any of that stuff.”

While some episodes, like the pre-election show featuring Premier John Horgan, are snappier, more issues-based affairs, others delve more into his subject’s backstories and personal trajectories.

Amir points to a couple different episodes when highlighting some of the standouts during the show’s run so far.

He describes one with longtime former news anchor Tamara Taggart as his “perfect episode,” for example. “It’s a bit of an emotional roller-coaster; it gets very heavy; we laugh a lot. That’s one of my favourites.”

He also lauds his episode with independent Vancouver-Granville MP Jody Wilson-Raybould, who resigned from the Liberal Party of Canada in protest of the SNC-Lavalin affair last year.

“I think in that episode she opened up more than I had ever heard her in the media. That was certainly my goal. Sometimes you just have to be vulnerable yourself and have that genuine curiosity and emotional investment, and people will reciprocate,” says Amir.

And much to his own surprise, he managed to get former premier Christy Clark on the show earlier this year, where the pair discussed everything from the money laundering inquiry to sexism in politics.

Speaking of sexism in politics, Amir found himself involved in one of the major political scandals of the recent provincial election after he tweeted out a video clip that depicted Jane Thornthwaite, the Liberal candidate for North Vancouver-Seymour, making sexist comments about another North Vancouver candidate during an online roast for a retiring MLA.

I’m not going to editorialize this.

Rather, I’d like to hear from women on how they feel about this clip.

I’m sharing because a woman reached out to me and asked me to do so (her email in below tweet).#bcpoli pic.twitter.com/AiDwFmBT7F

While Amir, who’s been known to get political, considers himself an editorialist and an interviewer – not a journalist – he didn’t anticipate that video would garner so many views and generate so much conversation when he posted it, he says.

“I never anticipated that video would blow up the way it did.”

For the 100th episode of his show, Amir is bringing on Port Coquitlam Mayor Brad West for a conversation he says will be “spicy” and “really entertaining.”

That’s to be expected. From the beginning, Amir has set out to show how there’s more colour to this city of glass than meets the eye, it sometimes just takes a little spice to get there.

“A lot of great episodes have included people, myself included, getting emotional and getting amped up,” he says. “I come into every interview, every guest, with an emotional investment.”

Learn how to make traditional Irish soda bread at this year's CelticFest Vancouver
Mar 1, 2021 8:10 AM