What happened: North Vancouver’s Thomas FX is launching a new licensing deal to allow other firms to use its brand to sell eco-friendly products. Why it matters: The move comes as the film industry pursues efforts to become more sustainable.
Dec 1, 2019 2:00 PM By: Tyler Orton 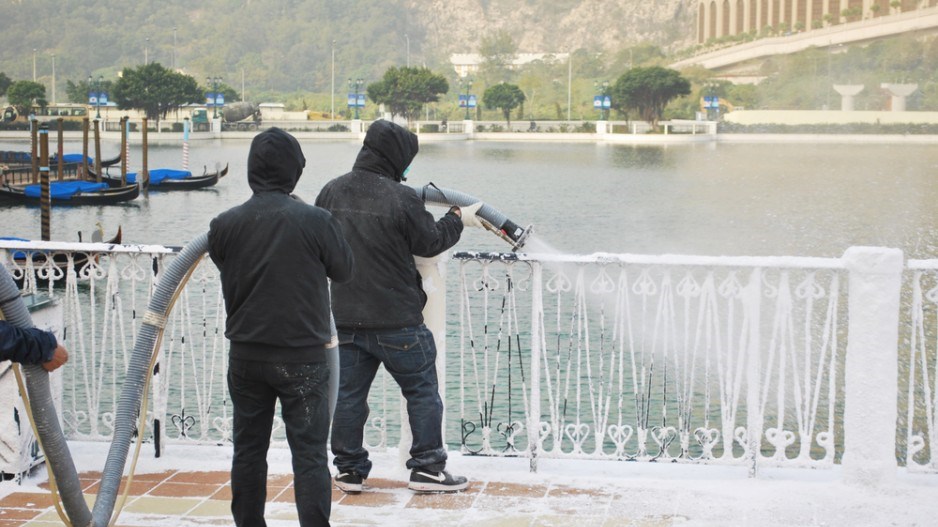 What happened: North Vancouver’s Thomas FX is launching a new licensing deal to allow other firms to use its brand to sell eco-friendly products.

Why it matters: The move comes as the film industry pursues efforts to become more sustainable.

All that fake snow and volcanic ash blanketing movie sets around the globe might become a little more eco-friendly next time they’re on the big screen.

Thomas FX Group Inc., a North Vancouver company known for developing biodegradable special effects products, is launching a brand and patent licensing initiative to expand the profile of its offerings.

Productions like Game of Thrones, Guardians of the Galaxy and TV’s Fargo have previously tapped Thomas FX to deploy eco-friendly products to create snowy or ash-laden settings.

The B.C. company, which has been in business more than 50 years, touts many of its products as non-toxic and biodegradable, and has cultivated an international dealer network with customers in 78 countries.

The licensing deal would allow what Thomas FX calls "qualified businesses" to operate under its brand to boost licensees’ credibility and sales.

CEO John Quee told Business in Vancouver in an email that before Thomas FX licenses it brand it would need to have confidence in another company’s business ethics, customer service and commitment to environmentally friendly products.

The qualified licensees would then be allowed to market themselves and do business under the Thomas FX banner and selling its products.

“Creative BC and the Vancouver film community recently hosted a three-day seminar on "green" production products and initiatives so there is a great deal of interest locally,” Quee said, referring to the Sustainable Production Forum held earlier this month.

Interest in making the film industry greener has been gaining traction in Vancouver.

Over the summer Vancouver city council passed a motion instructing city staff to work with the film industry to eliminate generators from shoots and develop electric infrastructure to plug in to.

Clarity Films president Clara George, who was among those shepherding the efforts in the private sector, said at the Sustainable Production Forum that her industry has been “begging” for more ways to cut emissions but needs the city’s help to facilitate it.

She cited letters of support totalling 89 signatures presented to city council as indications of buy-in from industry, with the Directors Guild of Canada, the Reel Green initiative and throngs of local producers and production managers throwing their weight behind it.

George’s own production company has been eliminating plastic cutlery on sets, ridding costume departments of plastic dry-cleaning bags and pushing for changes in paper supplies to get 100% recycled paper without any surcharges, among other initiatives.

Quee said potential licensees from India, Denmark, Spain and Mexico have reached out to Thomas FX since the initiative was announced November 28.

“In addition, we are already in discussions with companies in the United States, New Zealand, England, Ireland, Sweden and Dubai, so we expect significant growth in global demand as an increasing number of countries continue to tighten their domestic and import regulations in the face of global warming,” he said.