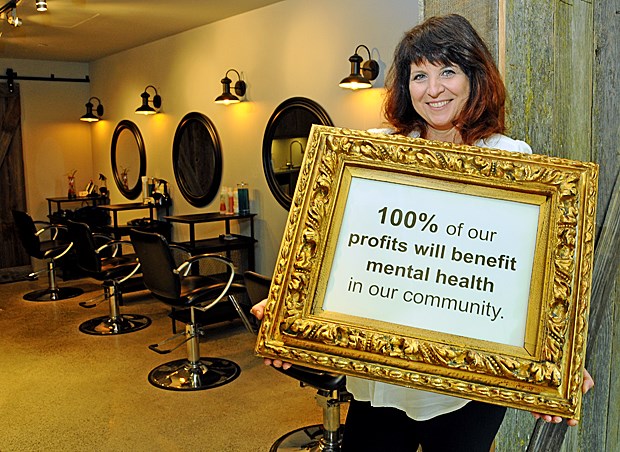 Terri Howie stands at the entrance to Joy Hair Studio, a new salon inside Lonsdale Quay Market that donates all its profits to support people with mental health issues.Cindy Goodman

Terri Howie remembers the haircut that changed her life.

For eight months prior, she had been struggling through a bad bipolar episode. She lost her executive-level marketing job, her husband, her home and her car. She'd burned through all her savings and was living on disability pay. She had attempted suicide twice.

Howie had fallen into a state of deep despair, but things started to look up one day when her mother took her to the salon.

"I was sitting in the chair, feeling like I wasn't even worthy of being there," she says. "They cut my hair and all of a sudden things just changed. I actually felt good about myself for the first time in months."

Howie decided to ride that unexpected wave of positivity. The feeling inspired her to get on the right medications, attend group therapy sessions, follow a strict diet and become more physically active.

That was 2010. Today, the 50-year-old North Vancouver resident says she is doing "so awesome."

Bipolar disorder is marked by alternating periods of elation and depression and one of the many ways Howie is managing her illness is by reintroducing structure and purpose to her life.

Named after her mother, Joy, who has supported her through the years, and after the feeling of joy, which she experienced after that uplifting haircut three years ago, the business operates as a social enterprise and donates 100 per cent of its profits to organizations that help people living with mental illness.

Howie has hired three stylists, but she herself is not taking a salary. Start-up costs were made possible thanks to a $50,000 grant from the Pacific Bipolar Foundation and Howie's personal fundraising efforts. The salon attracts a variety of customers, including people with mood disorders and people who just want to support the cause.

"Everybody seems to know someone who's bipolar or suffers from depression. It's amazing how many people are undiagnosed out there," Howie says, explaining that she has always struggled with her moods but was not officially diagnosed as bipolar until 2009.

She hopes Joy Hair Studio will become more than just a place for a haircut, but also an open forum for conversation. The salon features a 12-person banquet-style table where Howie hopes to host casual support meetings outside regular salon hours.

There are many misconceptions about bipolar disorder, she says, including the notion that bipolar people are "crazy" and incapable of handling day-to-day tasks.

"The stigma is just something that we really need to get around. Everybody's afraid to come out because of that."

She says many people also underestimate the severity of the moods bipolar people experience.

"You don't just get sad when you're bipolar - you're despondent, in utter despair."

Though Howie is doing well now, there is always the fear of a repeat episode.

"It's a constant worry, but by working, I think, within the community, I've always got this support," she says. "Since I've started this, I've had so many hugs it's unbelievable. How could you be unhappy with all that?" Joy Hair Studio is located on the second floor of Lonsdale Quay Market. A standard haircut costs $60. Customers who are on disability benefits due to mental illness will be charged just a marginal fee.