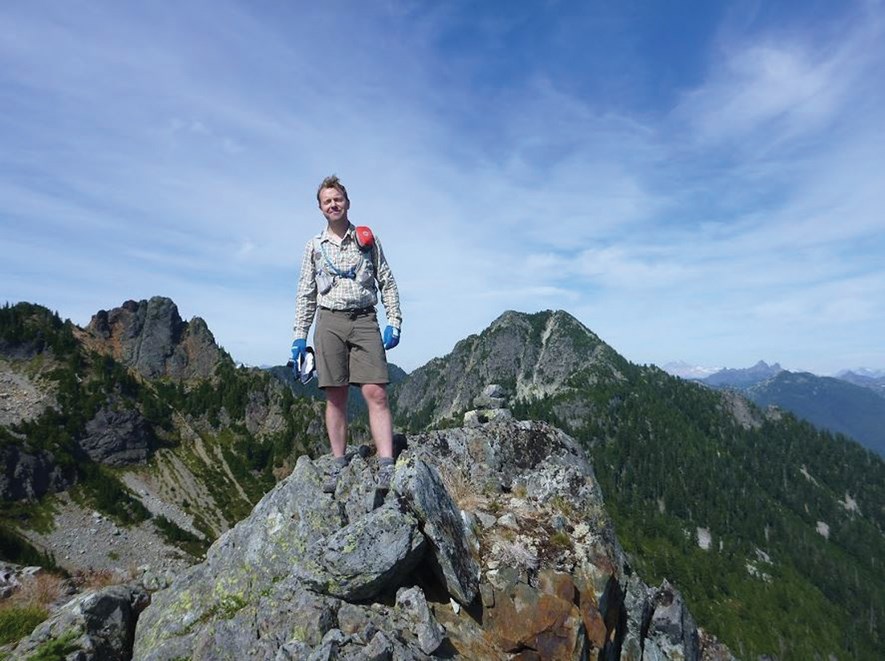 While there’s no evidence he forded every stream or followed every rainbow, Crerar scaled each peak from Britannia to Fannin; and – along with co-authors Harry Crerar and Bill Maurer – packed all 67 peaks into his new book: The Glorious Mountains of Vancouver’s North Shore: A Peakbagger’s Guide.

A peakbagger, for those uninitiated folks who tend to remain at sea level, is the alpine equivalent of those Beatles fiends who need to own every note John, Paul, George and Ringo recorded.

“It’s an awkward name, of course,” he acknowledges.

Crerar embarked on a quest to run every street on the North Shore. But while his feet were on the road, his eyes lifted to the mountains.

He initially set up a contest to see who could bag the most peaks in a summer.

After a few years of research and what he calls, “fairly aggressive exploring of the mountains in our backyards,” he had a thought.

“Well heck, why don’t we write a book about it?” he remembers thinking.

The authors also include an etiquette guide that ranges from the obvious (be friendly, don’t throw rocks) to tips that should be obvious, such as walking through – not around – puddles and avoiding “bloody annoying” unsolicited advice and comments.

“If people want input from you, they’ll ask,” the authors state.

It would have been a fairly straightforward trail guide if not for one crucial decision, he says.

“I made the mistake of wandering into the North Vancouver Museum and Archives,” he explains.

It was in the archives, assisted by archivists Daien Ide and Janet Turner, that Crerar realized the book could be imbued with centuries of history.

The book references Squamish and Tsleil-Waututh names for mountains and rivers as well as the titles bestowed by settlers in the 18th and 19th centuries.

From Howe Sound to Bowen Island to Mount Harvey, a great deal of B.C.’s geography was named to honour a 1794 naval battle in which Admiral Lord Richard Howe did his damndest to keep a shipment of grain from arriving in France. While the British failed to keep France gluten free, they were responsible for sinking one French ship and capturing six others during The Battle of the Glorious First of June.

But while many features can be traced to that battle (Brunswick Mountain, the tallest on the North Shore, is named after a ship used in the battle), “subsequent naming patterns went all to hell,” the authors write.

Because Brunswick was thought to honour a royal family surname, peaks were subsequently named after: “various iterations of the House of Hanover and our present Canadian/British/German royal family including Hanover, Windsor, and Gotha and Coburg looming over Deeks Lake,” the authors write.

A similar misunderstanding characterizes the Fannin Range, according to the book. While Mount Bishop was named after Joseph Bishop, the first president of the B.C. Mountaineering Club, Rector, Vicar, Deacon and the rest of the Episcopal Bumps were erroneously dubbed to complement Bishop.

Zinc Peak commemorates the “mini-mines” dug to gauge the viability of mining in the area. Mount Perrault is named for Charles Perrault, the author of Sleeping Beauty, after Sleeping Beauty was given to the peak best known now as West Crown.

But the names of some spots, such as Rice Lake, proved cryptic.

“I spent hours trying to research that one and there was nothing,” Crerar says, noting there’s no record of wild rice cultivation in the area, although he reasons the name might owe something to Japanese loggers who worked nearby and conceivably ate rice at the lake.

In the book, the authors describe, “the religion of trail running and the worship of nature.”

“We stumbled through these adventures, often with minimum information in our heads and maximum blood on our legs,” the authors write. “The goal of this book is to open these doors and to allow you to sense the same wonderment that we did when we discovered that such scenery and adventure lies in our backyards.”

While running and climbing mountains is a fairly recent pursuit in his life, Crerar has long been a wanderer.

“I had the classic North Vancouver upbringing in the ‘70s when kids were more free and I’d just wander off after school and you’d explore a forest,” he says. “That drives me still.”

He recalls going on an impromptu hike from Seymour Heights Elementary to the Baden Powell Trail when he was a child.

“My parents would probably be arrested these days if that were to happen but it was a grand adventure,” he says.

The book is an aid to other adventurers, as well as an environmental plea.

The book quotes a Daily World article that described Vancouver as: “the only city on the American continent where bear, deer and goats can be shot within sight of city hall.” And it also excerpts a passage from Douglas Coupland’s short story collection Polaroids from the Dead that describes the North Shore mountains as a demarcation. “There are only more mountains – mountains until the North Pole, mountains until the end of the world. ... Here is where civilization ends, here is where time ends and where eternity begins.”

But Crerar notes that the backcountry doesn’t teem with as much wildlife as you might expect.

“We should not be so glib with thoughts that there exists infinite wildlife ‘back there’ such that if a bear or two is shot for rummaging in rubbish bins left out overnight by suburban idiots, it is no big deal,” the author writes. “Let us rewild our North Shore. ...”