Timed with last week's commencement of Parliament, North Shore youth have been learning about Canadian government (and some Star Wars ) at a weekly video game camp.
Dec 9, 2015 12:00 AM By: Ben Bengtson 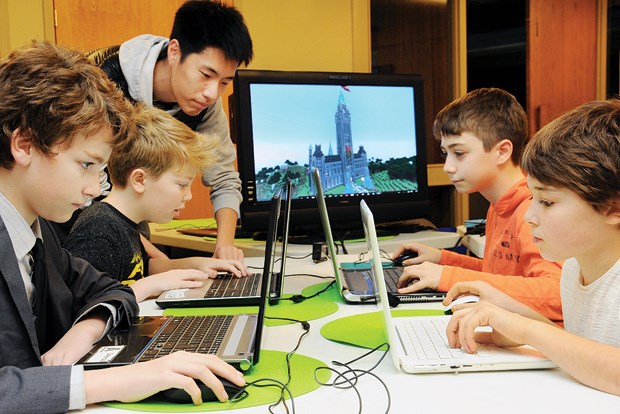 Timed with last week's commencement of Parliament, North Shore youth have been learning about Canadian government (and some Star Wars) at a weekly video game camp.

Lincoln Pilley, a Grade 4 student from Gleneagles elementary, has been playing a Star Wars simulation on Minecraft. He's collecting resources to advance his mission on the ice planet Hoth. "Mainly what I'm looking for is Imperial credits (money) so I can buy a hyperdrive from a Tatooine villager, then I can teleport," he said. It may sound like sci-fi babble but there is some learning in there.

MCKids founder Anna Belluz (who goes by Momibelle on Minecraft's servers) created the academy in 2013 after playing the game for years with her daughter, who has special needs that made traditional learning difficult. Playing the game together allowed Belluz to understand how to best educate her child.

"I actually got to see who she really was," she said. "I got to see how she was really thinking. I could see how she interacted with the different challenges in the game."

Andy Chen, a Grade 10 student from West Vancouver secondary, volunteers at MCKids Academy by teaching his younger peers how to play and build in the game. The latest project that Chen helped create for the camp was a replica of the parliament buildings in Ottawa.

"The kids seemed to enjoy it," he said. "But they were actually more interested in the interaction part of it. I just created a better environment for them to do so."

That interaction was the virtual government the youth formed once the Parliament building was finished. And it's not the first time MCKids members have used the game as a bridge to civics.

"When the federal election happened we had three parties running. One was the Creeper Club, the other was the Blaze Rods and the last one was the Cow Party."

Several of the youth who are signed-up at MCKids Academy have learning difficulties and special needs. According to Belluz, Minecraft is good for them because the game is a "community space" that thrives on structure.

Belluz said that providing a "guided gaming environment," such as running a government in Minecraft, was educationally beneficial for young people, unlike the popular shoot-em-ups that tend to fly off the shelves at Christmastime.

"I think if you just allow the child to play the game that is not structured for learning, you'll see a lot of 'messy' stuff happening and a lot of destructive stuff happening," she said.