At any of the MeeT restaurant locations throughout Vancouver, those popular emporiums of creative vegetarian comfort food, there is a $3.
Oct 11, 2019 9:21 AM By: Chris Dagenais 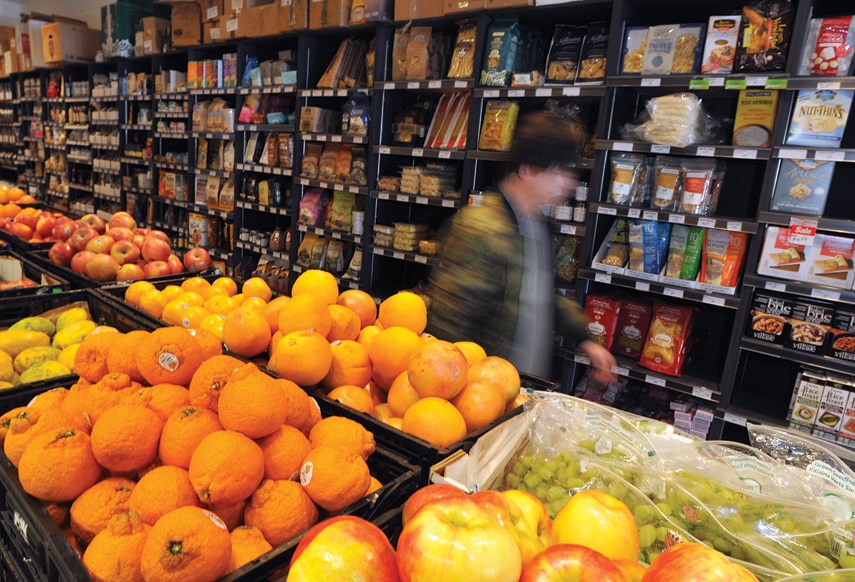 Beyond Meat options are available in many grocery stores including West Vancouver’s Farm to Table Market.Paul McGrath, North Shore News

At any of the MeeT restaurant locations throughout Vancouver, those popular emporiums of creative vegetarian comfort food, there is a $3.75 supplement to substitute a Beyond Meat burger for the regular patty, bringing the cost of the least expensive burger there up to nearly $20.

At A&W restaurants in Canada (which are not affiliated with their franchisee-owned American counterparts), Beyond Meat’s Beyond Burger features on the regular menu at $7.00, putting it squarely in line with the price of the fast food chain’s double beef patty burgers. In 2018, when A&W launched the Beyond option, the product proved so unexpectedly popular that there was a supply shortage that contributed to the meat-alternative company’s efforts to seek a new manufacturing facility to help keep up with demand. While some vociferous critics pointed out that A&W does not cook its vegetarian burgers on a separate grill from its meat-based burgers and therefore cannot claim the Beyond burger is vegan (it can also be ordered topped with cheese), sales momentum has not slowed down and the product remains on menus across the country.

Early investors in Beyond Meat have been handsomely rewarded as the Los Angeles-based company’s shares have increased as much as 840 per cent in value since the initial public offering on May 21. While the company’s shares seem to have adjusted somewhat and are currently holding firm at around US $144 at the time of publication, the Beyond Meat phenomenon still remains an unprecedented success.

In fact, McDonald’s, the godfather of fast food families with tentacles into every corner of the planet,  announced last month its plans to pilot a Beyond Meat burger offering, running a trial in Ontario for 12 weeks. It will sell its interpretation of the Beyond Burger for $6.50.

That this meat alternative product can command such competitive prices without alienating its audience is remarkable in a marketplace that has given rise to abysmal factory farming practices allegedly stemming from consumer demand for dirt cheap beef.

Now look, I can already sense a growing unease among some of The Dish readership here. Let me assure you, I’m not writing this column from my soapbox; this is not to be a lecture on the evils of mass animal agriculture. Indeed, there are better versed, more impassioned writers than I who have thoroughly tackled this topic.

I should also remind everyone that I have a steel palate and reinforced stomach that can, and often do, consume all manner of what Anthony Bourdain once called “nasty bits,” from tripe and tendon in my pho to corned beef tongue with spicy mustard on rye bread. However, I will say here that the knee-jerk aversion to meat alternatives that I have watched emerge from both vegan and devout meat eater camps alike truly perplexes me.

I have spoken extensively to vegetarian and vegan food innovators on the local restaurant scene on this very topic, largely while conducting research for my own Plant-based Foodie volume that came out last year. The argument against Beyond Meat and its numerous competitors that all trade in the alternative protein space, is that we ought to abandon the idea of meat consumption altogether and celebrate a true plant-based diet rather than work so hard to emulate meat proteins by bending and manipulating plants into meat-like textures and flavours. The implicit idea here is that as long as we give credence to the concept that protein is so tasty and essential that we need to build all of our meals around it, we will never see the end of the destructive meat industry. In other words, meat imitation does nothing to counter meat consumption because it still advocates for the primacy of protein on the plate.

On the other side of the coin, I have spoken to countless self-styled “good old fashioned carnivores” who hold steak in the highest esteem and consider the grills of their barbecues holy places. These folks, some of whom are friends with whom I spar on this subject regularly, hold that we humans are equipped with canine teeth and a digestive system capable of processing animal proteins for a reason, and while it may be lonely at the top of the food chain, it is also a mighty tasty place to be, so why deny our inherent privilege? To them, this alternative protein witchcraft is an affront to all that is sacred and a self-righteous slap in the face of the hard working farmers who furnish us with ribeyes and tenderloins, the way Mother Nature intended.

I take a much more pragmatic view on the matter. Why should anyone who chooses a meat alternative product be called upon to justify their choice? Who is it hurting, in the end? I have cooked, ordered, recommended, and eaten a tidy sum of plant-based proteins in my time and it has in no way politicized me or encouraged me to attempt to convert anyone to a new way of eating. You do you, and I’ll do me.

You see, I like the Beyond Burger. It grills well, remaining juicy and tender even after a high heat flame sear, and it is something that my kids have embraced as a tasty Saturday night backyard treat. One of Beyond’s main competitors, Impossible Foods, which makes burgers, sausages, and ground protein just like Beyond, has also done a nice job of its wares. I visited their sprawling tradeshow booth at the National Restaurant Association show in Chicago this year and enjoyed a succulent slider or two, as well as a trio of tacos made with their ground beef alternative. Burger King already offers an Impossible option on its menus in the U.S. In what way does this consumption affect anyone in either of the hardline camps described above? I understand that these products (the burgers in particular, which still typically come laden with sauces and the usual accompaniments, like French Fries) are not health foods. The salt content is significant and ingredients have been processed to achieve their beef-like texture. But I can’t imagine anyone in 2019 looks to hamburgers to achieve their health and wellness goals.

Let’s review some data: Beyond Meat burgers are made from beets, coconut oil, yellow split peas, pomegranates, mung beans, rice, apples, and potatoes, with various seasonings. According to a peer-reviewed life cycle analysis study by the University of Michigan (Heller & Keoleian, 2017), a standard Beyond Burger generates 90 per cent less greenhouse gas emissions, requires 46 per cent less energy, has 99 per cent less impact on water scarcity, and 93 per cent less impact on land use than a standard 113 gram (1/4 pound) U.S. beef patty.

I’m not an environmental scientist, but it seems to me that if I were to choose a meat alternative burger over a traditional beef burger more often, I would be choosing a product with a considerably smaller footprint, to say nothing of the implications on animal welfare. If such a choice emulates meat, but is still not meat, why does that draw the ire of plant-based dieters? Similarly, if beef-loving meat eaters simply regard the Beyond burger as another option in their hamburger repertoire, what threat exists to them through this product?

I suppose the answer to both questions may lie in what products from Beyond Meat and Impossible Foods represent: they are stark reminders of the state of our market. These alternatives exist in order to address the very real challenge of a meat industry that cannot and, frankly, should not be sustained in its current form, one marked by untold waste, ethical compromises, and health concerns both human and environmental. In fact, there is merit to the argument that only a dramatic reduction in meat consumption will facilitate the long-term option of meat consumption at all.

This is a hard reality for those for whom meat forms the core of three square meals a day, as well for those that would like to see the wholesale elimination of animal products. Meat alternative proteins serve the paradoxical double duty of reducing meat consumption while contributing to its long-term sustainability.

Whether any of us approve or not feels immaterial, however, as giant food industry players like Tyson Foods, Nestle, and JBS (the world’s largest meat supplier) are releasing or are poised to release, meat alternative products to cash in on a new consumer segment, reshaping our food aisles and menu options.

Check out these awesome food and drink events in Vancouver this August
Aug 1, 2021 1:45 PM