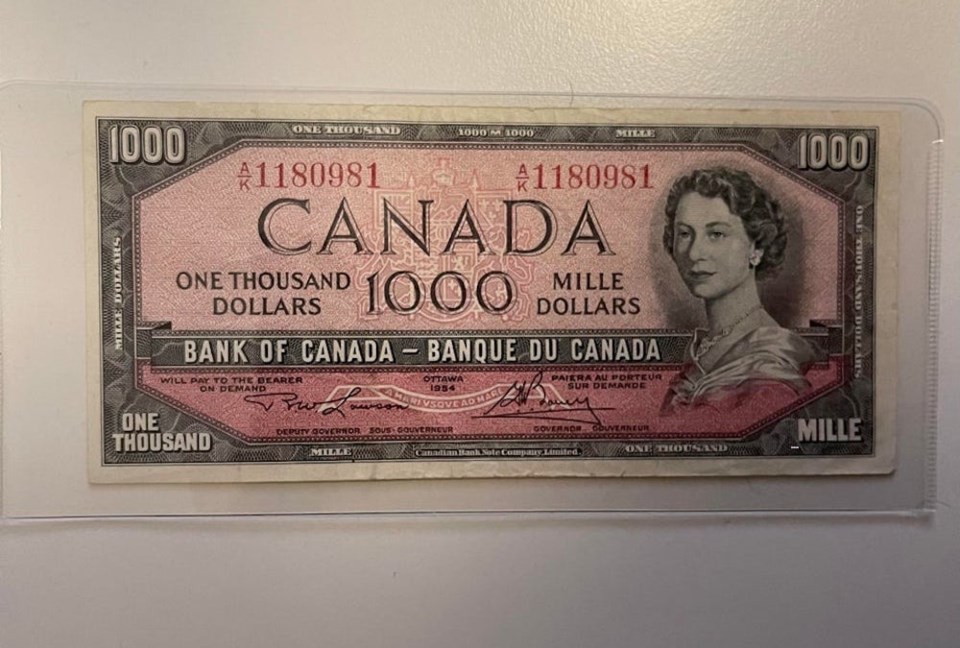 This $1,000 Canadian bill from 1954 is no longer considered legal tender--but that doesn't mean it is worthless.Photo via Mickey_20 / Reddit Canada

While you might have a couple of $1 or $2 bills stashed in your abode, you might not have so many $500 bills.

These banknotes have not been produced in decades, so the Bank of Canada says the decision to remove them from circulation has had little impact on most people.

According to the Bank of Canada Museum, "The $1,000 note was printed by Canadian Bank Note Company Ltd. The back of the note shows the covered bridge in the village of L’Anse-Saint-Jean, Quebec, and, in the background, the Saguenay River fjord.

"The photo that the engraving was based on was taken by Max Sauer of Montréal."

The $1,000 denomination stopped being issued in 2000, and it is no longer considered legal tender. Essentially, you won't be able to spend them in a cash transaction.

This does not mean that the notes are worthless, however. The Bank of Canada says it will continue to honour them at face value. You can take them to your financial institution or send them to the Bank of Canada to redeem them. Or, you can keep it.

The Bank of Canada adds that some of the rarer notes, such as the $25 and $500, can be worth significantly more than face value.

"To find out if your bank note may have a different value to collectors, you may refer to a collector's catalogue or obtain an evaluation from two or three money dealers who cater to the collection market."