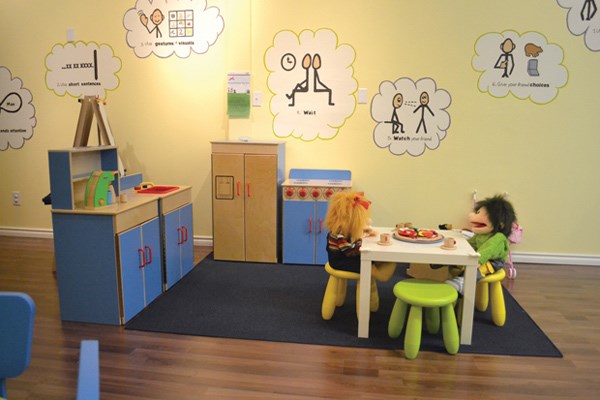 IT wasn't until she was on her way out of China that Heather McCracken realized what she'd left.

The North Vancouver resident had been approached to design a play centre in Beijing that would facilitate children with autism in forming friendships and learning to play.

"When I had completed my task there I left, and I kind of felt like I left one of my children in China," McCracken says. "I decided when I got back that we were going to do it here."

For the last 10 years McCracken has been delivering programs for the Friend 2 Friend Social Learning Society, a non-profit charity that aims to demystify autism and help children with autism to play and make friends.

The centre, located on Kingsway near College Street in Vancouver, began offering programs on Oct. 13.

The programs, which are designed for children between the ages of three and 12, include early childhood playgroups and parent participation playgroups as well as out-of-school, Saturday, and summer camps.

"We'd been planning and thinking about it and designing and dreaming about it for quite some time, but I guess it was going to Beijing and doing it there that kind of inspired me to just get it done and stop talking about it," she says.

Working out the financial and physical logistics of establishing the centre was a challenge, according to McCracken.

"It took us almost a year to find the space, it was brutal."

After settling on East Vancouver as a neighbourhood, the group spent between $130,000 and $150,000 to establish the centre.

"We've secured about 70 per cent of the funding so far. . . . We still have to pay the rent and heat the place now, that's going to kill us," she says, laughing.

The society budgeted $175,000 for the centre's first year. "We're pretty confident that we're going to be able to manage this. It's the long-term funding that's always challenging," McCracken explains. "It's never easy to secure funding these days, and being a non-government-funded non-profit, we raise all of our own funds."

Despite a shortfall of at least $25,000 for the first year and the high price of operating costs, McCracken says the society's diverse revenue streams should keep their doors open.

"We call ourselves an entrepreneur non-profit because we raise a lot of our funds through fees, and speaking engagements, and book sales," she says. "I get paid a lot of money to go speak in places like Beijing or San Francisco or what have you, and the money I earn goes back into the society to help deliver the programs locally."

McCracken's work with children with autism began when she discovered a scarcity of activities for her son.

"I am the parent of three children and my son, Ian, has autism," she says. "When my son Ian went into the public school system I went looking for programs that would help facilitate social communication and peer play between him and his peers and couldn't find any."

After founding the Friend 2 Friend society in 2002, McCracken went to work establishing the autism demystification program and an integrated playgroup program.

The society delivered 35 programs in their first year. In their second year, they delivered 297.

"Purely out of need," McCracken says. That same need was apparent when it came time to establish the centre, according to McCracken.

Because children with autism are often resistant to new places, a lot of preparation goes into a child's first day at the play centre.

"Before a child even arrives through the door for the first time . . . we do a lot to help prepare them for that including social stories and calendars and schedules," McCracken says. "We also have a transition visit with the child where we have a very closed, quiet centre and there's nobody here but the master guide and the play guide and we meet the child and have a chance for the child to get to know us and get to know the environment and explore the environment before playgroup starts."

Part of what makes the centre unique is its emphasis on consistency.

"Every playgroup is the same in the sense that the schedule is the same because we actually want children to understand and know what to expect every time they walk through the door," McCracken says. "We design the play around the interests of the child to try to make it as natural a play environment as it would be for a typical child."

Each playgroup consists of one or two children with autism and three peers. Workers at the centre guide all the children to help them learn how to play together.

"Their way of processing the world is very unique to them," McCracken says of children with autism. "They process sensory communication, social information, differently than someone without autism and it's all about really understanding and respecting how that person processes the world around them and supporting that," she says.

While disputes continue about the proper treatment of autism, McCracken says a growing number of parents have begun to see autism as a processing difficulty.

"This is not a broken child that we need to fix," she says. "It is a child, and a child first and a child with autism second."

The centre's next information night is scheduled for Nov. 28. For more information on the society visit friend2friendsociety.org.