Flavourful meal not too spicy

How is it possible that after a decade of living on the North Shore I had never been to Spicy House, the long-standing Korean restaurant on Lonsdale Avenue and 20th Street? Perhaps it’s because the restaurant’s modest, nondescript façade and interior
Jul 23, 2014 11:43 AM By: Chris Dagenais, Contributing Writer 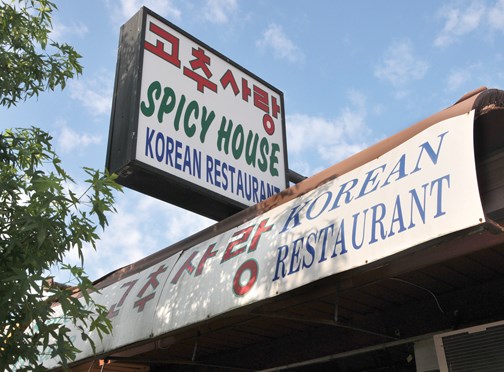 How is it possible that after a decade of living on the North Shore I had never been to Spicy House, the long-standing Korean restaurant on Lonsdale Avenue and 20th Street?

Perhaps it’s because the restaurant’s modest, nondescript façade and interior betray no evidence of the gloriously bold cuisine that awaits the diner within.

Whatever the reason for my omission of Spicy House in my ever-growing list of regular haunts, I am now prepared to make up for lost time. This is a restaurant that unapologetically embraces big, brash flavours, creatively blending some of my favourite ingredients, including sesame, ginger, garlic and chili, this latter achieving new heights in the form of the ubiquitous gochujang, a staple of Korean cuisine made of glutinous rice, soybeans, chilies and salt.

The mixture is traditionally put into earthen pots and permitted to ferment until it achieves a fiery pungency and complex flavour profile that can elevate simple and familiar ingredients to conversation-worthy heights.

One example of this elevation, ordered in what turned out to be another prolific menu sampling on my part, was Jeyuk Dupbab, marinated, shredded pork with carrots, onions, garlic, spices too numerous to identify in a single sitting, and a healthy slathering of gochujang.

Despite its heat, this is a fragrant, thoughtful dish, its slightly caramelized grilled meat, intense, fermented chili paste and heady garlic notes adding up to something much greater than the sum of its parts.

Now, I recognize that super spicy food is not everyone’s thing. Fair enough. Personally, I have a good threshold for heat, but I am not impervious to it and I am certainly not a fan of the sophomoric “I dare you” mentality when it comes to spiciness; if the central ingredient in a dish is completely overwhelmed by fiery hot spices, I consider it to be a failed creation.

Spicy House expertly handles the reigns of the beast, tempering the fire just enough to showcase the ingredients beneath the chilies.

Also, it bears mentioning that there are numerous menu items at Spicy House that don’t rely on red hot chili pastes and purees for their richness of flavour. One such dish is a seafood pancake (known as a Jeon), a hugely portioned item featuring prawns, squid, crab, green and yellow peppers, onions and long, caramelized strips of scallion, all baked into a dense and golden, crepe-like batter and served with a sesame-infused soy sauce.

The pancake, which contained more seafood per square inch than a piranha tank at feeding time, reminded me a lot of a frittata in texture and shape, but with a greater delicateness to the batter that bound the ingredients together and a boldness of flavour that certainly took the dish out of the brunch camp.

Next, I enjoyed a steaming hot bowl of Ttukbaegi Bulgogi, a fantastically concentrated soup of tender beef and glass noodles with vegetables and a whole, hard-boiled egg yolk (no whites).

The broth, which was a wonderful chestnut colour, was obviously the result of a long process of reduction and fine-tuned seasoning and had a subtle sweetness to it.

My next dish, called Ojinguh Dupbab, was another fiery hot number, this time featuring squid with coarsely chopped onion, scallion, kimchi, and zucchini in a bright red gochujang sauce. The squid was cut into sizeable cylinders, which seemed to prevent it from being overwhelmed by the powerful sauce, the heat of which was augmented by the potent and tangy kimchi.

I was pleased to discover that Spicy House supplies a complimentary dish of traditional Korean pickles with every meal.

My plate included spicy kimchi, a briny, sea-soaked seaweed salad, giant radish, and beansprouts with finely chopped scallion and slivers of carrot. With the exception of the kimchi, the pickles helped to temper the heat of the other dishes and provided additional variety to an already diverse meal.

A final dish of Kimchi Udon was a pleasingly filling and mildly flavoured noodle creation that included grilled pork and onions. The kimchi offered a perfect crunchy counterbalance to the udon noodles, which I sometimes find overwhelmingly monotone in texture.

I glanced at a long, low, communal table that had been occupied by a large group of diners earlier in the evening and reflected on how an outing to Spicy House could be a great team-building or bonding experience.

Groups of friends and colleagues always seem to be looking for unique things to do and, to my mind, a sampling of the restaurant’s menu would be a source of lively conversation, for some, a bold adventure, and for most, I suspect, an enjoyable meal.

Chris Dagenais served as a manager for several restaurants downtown and on the North Shore. Contact: hungryontheshore@gmail.com.