In Victoria, an award-winning waterfront property sells to a developer for $5.6 million while B.C. taxpayers pay $14 million for a half-century old motel where the building is assessed at $90,000
Jul 2, 2020 8:00 AM By: Frank O'brien 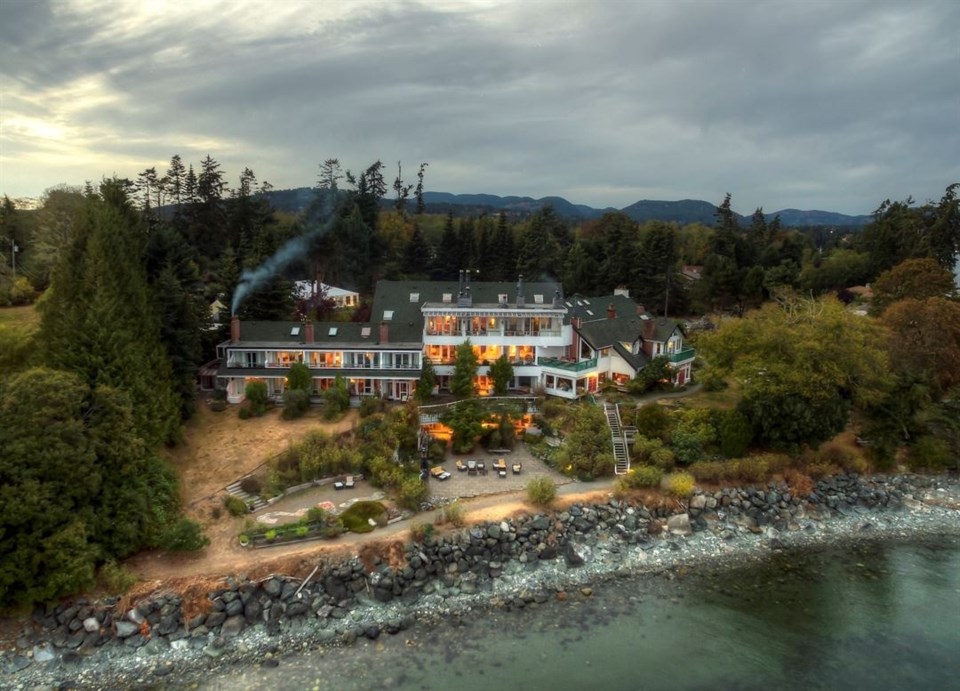 The vagaries of the hotel industry and the political pressure of a pandemic played out in Victoria’s hard-hit hotel market last month as the fabled Sooke Harbour House sold for $5.6 million just weeks after the B.C. government paid $14 million for an aging three-star motel on Douglas Street.

A B.C. Supreme Court order approved the sale after foreclosure actions had been launched. The hotel is currently closed.

Sooke Harbour House made a name for itself internationally after Frederique and Sinclair Philip purchased the property in 1979. Their focus on locally grown food and seafood and a top-notch wine cellar earned them honours inside

Canada and beyond. It has hosted movie stars and served as a movie-set location.

But the 28-suite hotel faced money problems and in 2015, the Business Development Bank of Canada began a foreclosure action, saying it was owed $2.9 million. The Philips mounted a financial revival that ultimately failed.

Watson is aiming to make the Sooke hotel a foodie destination once more.

“We have already made some overtures to some high-end food groups to come in and manage the restaurant side of it,” he said.

IAG plans to operate the hotel as a boutique destination resort after improvements are completed, Watson said.

Near downtown Victoria, the purchase of Paul’s Motor Inn by the B.C. government showed another twist of the pandemic pain.

The government bought the motel June 4 for $14 million after the province had leased 35 of its 75 rooms to house homeless people. Many of these were encamped in local parks without sanitary facilities or the possibility of social

distancing deemed essential during the COVID-19 pandemic.
The motel’s current BC Assessment value is $8.7 million, but the agency assessed the motel building itself at just $90,000. The most recent Trip Advisor rating for Paul’s Motor Inn was three stars, but this appears generous based on

comments from clients who posted on the popular travel site.
The high purchase price of the 49-year-old motel is considered an aberration in the current market, which saw about 60 per cent of hotels close down across the province during the pandemic. Most hotels did not restart operations until June 26 when the province entered the third phase of pandemic regulations

“The traditional market [for hotel investments] has dried up,” said Carrie Russell, senior managing partner of hotel consultancy HVS International, of North Vancouver. “There are virtually no transactions in B.C.”

The motel’s new residents will have access to meals, health care, addictions treatment and harm reduction, plus storage for personal items, according to the government. A local restaurant is being contracted to provide takeout food, said Heidi Hartman, B.C. Housing regional director of operations for Vancouver Island.

The remaining 20 employees working in the motel have been offered temporary employment until a new operator comes in, Hartman said.
Retaining staff may be a challenge.

Rev. Canon Ian Powell, former managing director of Paul’s Motor Inn and Restaurant, told CFAX 1070 that the motel had “considerable strife” after BC Housing leased about half the hotel back in April.
Powell said some staff members refused to work while people were being sheltered at the motel, due to safety concerns. A key supplier also refused to enter the hotel, he added.

BC Housing said staff will be on site around the clock to provide security for residents and the neighbourhood, the province said. A community advisory committee is also being set up to deal with concerns raised by neighbours. An experienced non-profit operator for Paul’s is expected to be chosen in coming weeks, the government said.