Diving into an ocean of delectables at The Captain's Boil 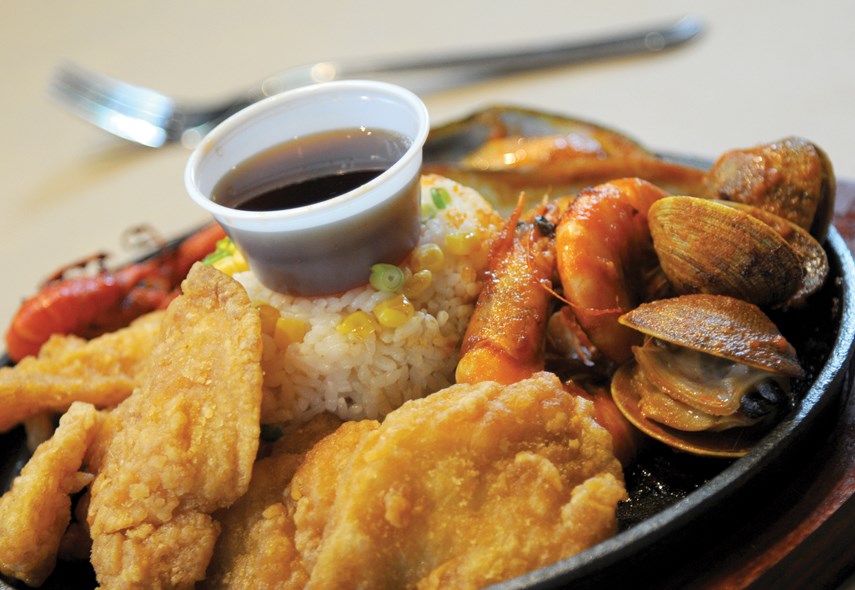 The Captain’s Boil restaurant is part of a rapidly growing chain that has a considerably heavier presence in Eastern Canada than here (which explains the equal billing of Atlantic lobster alongside local Dungeness crab).

The devastation was total. As far as the eye could see, carnage prevailed. Heads had been torn clean from their bodies, the grey matter sucked from them in ritualistic, primal indulgence. Severed limbs formed gruesome, twisted piles, the flesh that once gave them strength and motion reduced to remnant strands through untold acts of barbarism, while abdomens had been turned inside out, with only scant clumps of viscera remaining.

A bucket sat filled to the brim with hard-to-identify anatomy. The air hung thick and heady with the scent of garlic butter and Cajun seasoning?

Yes, The Captain’s Boil, Lower Lonsdale’s newest entrant to North Vancouver’s central arterial dining scene, put me in touch with my inner savage, a beast so thoroughly tempered by conference call etiquette and templatized, Microsoft Office-mediated communication that I scarcely identified with it when it surfaced with reckless abandon in front of a big old sack of crawfish with okra.

The Captain’s Boil restaurant is part of a rapidly growing chain that has a considerably heavier presence in Eastern Canada than here (which explains the equal billing of Atlantic lobster alongside local Dungeness crab) and follows a standardized mix and match approach to dining. Patrons are invited to choose a central protein (all seafood, save for the anomalous, vague “chicken slices”), then a sauce in which said protein will be immersed, the spiciness level of that sauce, and finally the “add-ons” that will accompany the protein. These latter include corn, okra, potatoes, sausage, broccoli, and lotus root. Side dishes include variations of French fries, garlic bread, a number of other seafood dishes like fish and chips, calamari, or fried shrimp, and rice dishes, including a treasure of a dish called Cajun Seafood Fried Rice that I’d be inclined to have as a full meal on its own.

Turn me loose in a land of such wild oceanic meal possibilities and I am apt to try as much as I possibly can for fear of missing out on something vital. Pair that inclination with still-green service that was timid in guiding me to the best bang for my buck, as well as showing up to the restaurant with a voracious appetite with a similarly hungry dining partner, and you have the perfect recipe for a ludicrous meal, one in which, let’s say for argument’s sake, I completely overlook the discreet note next to most menu items that says “market price.” More on that oversight in a moment.

I would like to share with you first the juiciest kernels of my hard-won wisdom from my meal. Straight off, let me tell you that the lobster and crab are both phenomenal menu choices. Go for the Captain’s Boil sauce on these as it is a delicious comingling of the other three sauce flavours on the menu (lemon pepper, garlic butter and Cajun), revealing solid garlic notes enlivened by chilies, white pepper, citrus and thyme, and go for medium heat, interpreted at Captain’s Boil as spicy enough to foster a light sweat without eclipsing the innately delicate flavours of the seafood. The crab (which bore no accompaniments) and the lobster (which came with an ear of corn alongside it, as per my instructions) were both whole sea creatures chopped in two straight down the centre line, and were accordingly substantial in portion. The lobster was particularly meaty and fresh, with the signature subtle sweetness offset by sea-like brininess.

My dining partner James and I agreed that the two scuttling crustaceans were best in show, followed by the third place finisher, a hefty order of crawfish in Cajun sauce. Crawfish, which resemble tiny lobsters, have notoriously delicate, delicious, and succulent meat, but I must confess it had been a long while since my last experience with them and I had frankly forgotten how poor the effort to reward ratio is on these suckers. I easily spent 20 minutes just working my way through the stubborn exoskeletons of my half of the bag in order to secure maybe, at a generous estimate, two and half ounces of meat. In case the word caught your eye, I should explain that The Captain’s Boil serves their dishes in the melt-resistant plastic bags in which they are cooked. All of your menu choices around your central protein are thrown into a bag and boiled until ready, which makes for a thorough infusion of flavours and relatively healthy meal. Of course, it also creates a lot of very immediate, very hard to ignore plastic waste. Maybe this is just wine-swilling, pipeline-blocking Vancouver hippiedom talking, but I suspect the plastic bags are eventually going to be the source of some debate with the local dining audience, not to mention the Styrofoam bowls and plastic spoons that pass for side plates and cutlery in this space.

In any event, the crawfish were undoubtedly tasty and, despite the requirement for two dozen napkins to get through them, were worth trying for their relative rarity on our local market.

James and I picked our way through the Cajun Fries, essentially just normal fries tossed in a lightly salted spice mixture, but we devoured the Cajun Seafood Rice, what I imagine is the restaurant’s riff on Louisiana specialties like Dirty Rice or Jambalaya, in which generic white rice is transformed into something complex and bold with the use of whatever the cook has on hand. Here, the rice featured a generous portion of meaty shrimp, peas, corn, and scallions, and had a garlicky, salty, amber-hued coating. I would unequivocally recommend it as a side to whatever protein you choose as you will find yourself in need of something to soak up the tasty, seafood-macerated sauces that will invariably remain once you have thoroughly picked through your shells.

A final dish of mussels, which, based on their size and distinct shells, I suspect were Asian green rather local blue, were meaty and dense, but proved both superfluous and our least favourite dish of the meal.

From an exceptionally limited drinks menu that does not yet include any locally brewed fare, James and I opted to wash down our meals with Sapporo beer.

Now about those market prices: the lobster ended up costing $51.25 and the crab $52, both before taxes and gratuity. Add $24 for the crawfish, another $13 for the mussels, and then our various sides, and our meal came in at a whopping $198. Order wisely, my friends.