Misinformation in the pet food market is prevalent. This can be detrimental to companion animals on many levels, especially with growing reports of pet obesity rates spiking in the United States. A 2006 article published in The Journal of Nutrition reported dogs and cats share growing obesity incidences ranging from 22% and 40%. Overweight pets are at risk for conditions ranging from osteoarthritis and joint disorders to cardiovascular disease, endocrinopathies, metabolic abnormalities, and decreased immune functions.

Choosing the right diet for your pets can be a daunting experience. Veterinarians can offer guidance based on a pet’s age, size, health, and specific needs. Some good rules of thumb for owners: have complete nutritional assessments with your veterinarian throughout your pet’s life and monitor how your pet reacts to that diet. Go a step further and learn about food labels and pet food standards from the Food and Drug Administration and the Association of American Feed Control Officials.

Still having trouble determining fact from fiction? ManyPets researched 10 of the most common misconceptions around pet food. 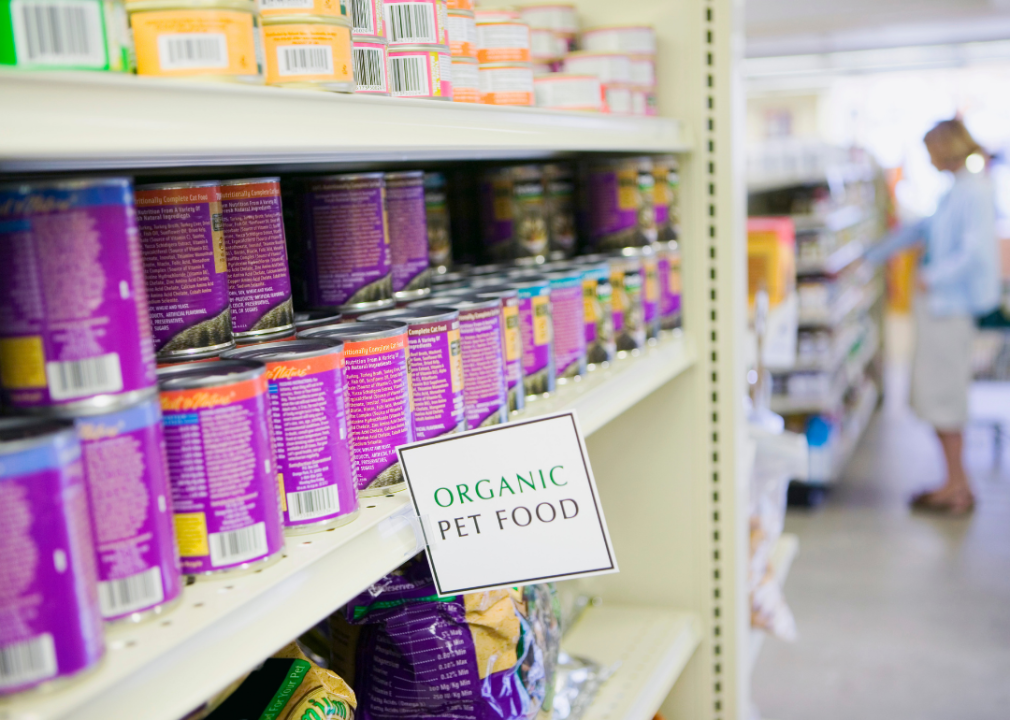 Human food in the grocery store marked “organic” has been determined to abide by rules and regulations of the U.S. Department of Agriculture’s National Organic Program. These foods meet standards in the methods they’re raised, with no synthetic fertilizers, sewage sludge, irradiation, or genetic engineering used. Though there are no such rules for pet food at the moment, they are currently under development. What shoppers can look for in the meantime is a USDA seal signifying the product is made of at least 95% organic ingredients.

Is organic actually the healthiest pet food available? Several studies have revealed the differences in nutrient levels between organic and nonorganic pet food are negligible. If pesticide exposure is a concern, it’s important to know pesticides are can be used with growing organic foods, however, they can’t be synthetic and must be certified for organic gardening.

Something else to be aware of: Foods claiming to be natural, holistic, complete, balanced, or 100% nutritious may merely be marketing ploys. To ensure the food you’re purchasing is safe for your pet, look for food with a nutritional adequacy statement from the Association of American Feed Control Officials on its label. 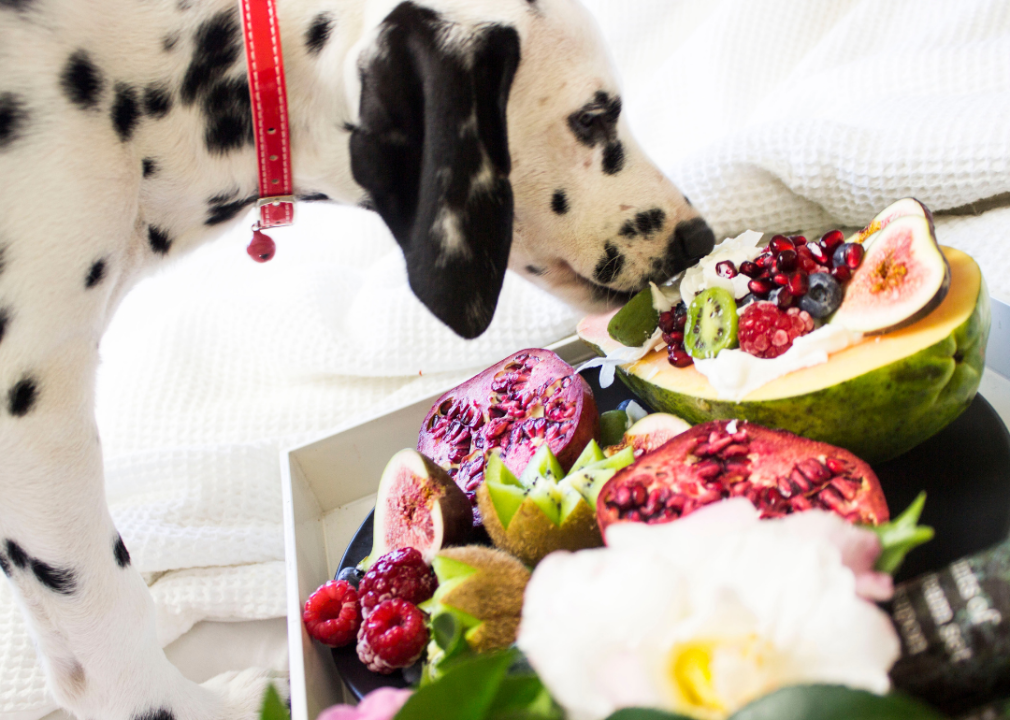 “There are no scientifically-supported benefits to homemade diets,” states a 2019 article from the American Kennel Club. Preparing homemade food for pets can lead to nutritional deficiencies or excesses. What is recommended instead is whole, ingredient-based, balanced diets. Commercial pet foods are made with this standard in mind, though it’s important to check labels to make sure it passes regulations by the Association of American Feed Control Officials.

A few reasons some pet owners lean into homemade meals: picky eaters—yes, eating the same food day in, day out can bore pets as well—and food intolerance issues. Those wanting to go the at-home cooking route should keep a few things in mind. Not all recipes are created equal. Just because it’s online or in a book, it could fall short, or be unsafe for your pet. Check with your veterinarian or a board-certified veterinary nutritionist first before taking the homemade approach. 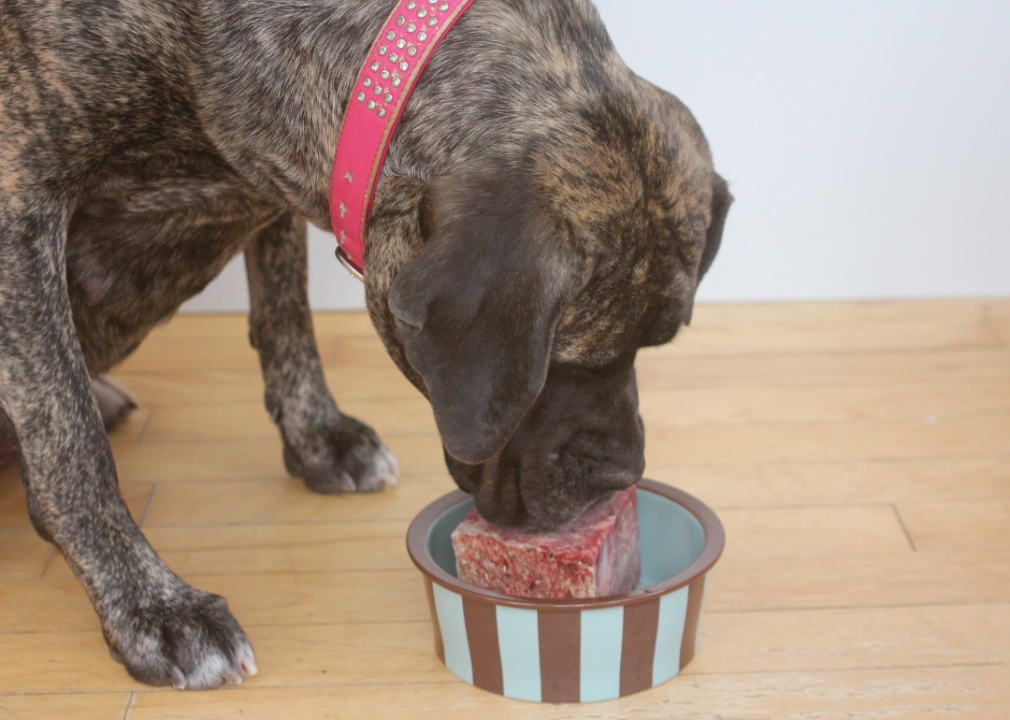 Raw diets have made the rounds for both humans and pets alike in recent popularity, with a few distinctions. For humans, a raw diet is composed of unprocessed and uncooked food with versions for vegans, vegetarians, and omnivores. Though there are benefits to be had going the raw route, this type of diet can also lead to nutrient deficiencies.

So how does a raw diet stack up for pets? A biologically appropriate raw food or bones and raw food diet for pets, also known as BARF diets, consists of foods such as grains, vegetables, bones, and meat. Raw meat-based diets are also referred to as RMBD. A theory behind a raw diet for pets is to bring animals back to their roots of eating in the wild. Proponents have also said the quality of raw diets for pets is superior and more easily digested. Thus far, no specific evidence has been found that feeding pets a raw diet versus conventional food is beneficial.

In fact, as far back as 2010, the American Veterinary Medical Association, American Animal Hospital Association, and Canadian Veterinary Medical Association came together to discourage the practice, citing that “potential pathogen contamination of the uncooked meat causes health risks to the pet fed the diet as well as to other pets, human family members, and members of the public in contact with the pet.” As with humans, a raw diet for pets may lead to nutrient deficiencies or excesses. 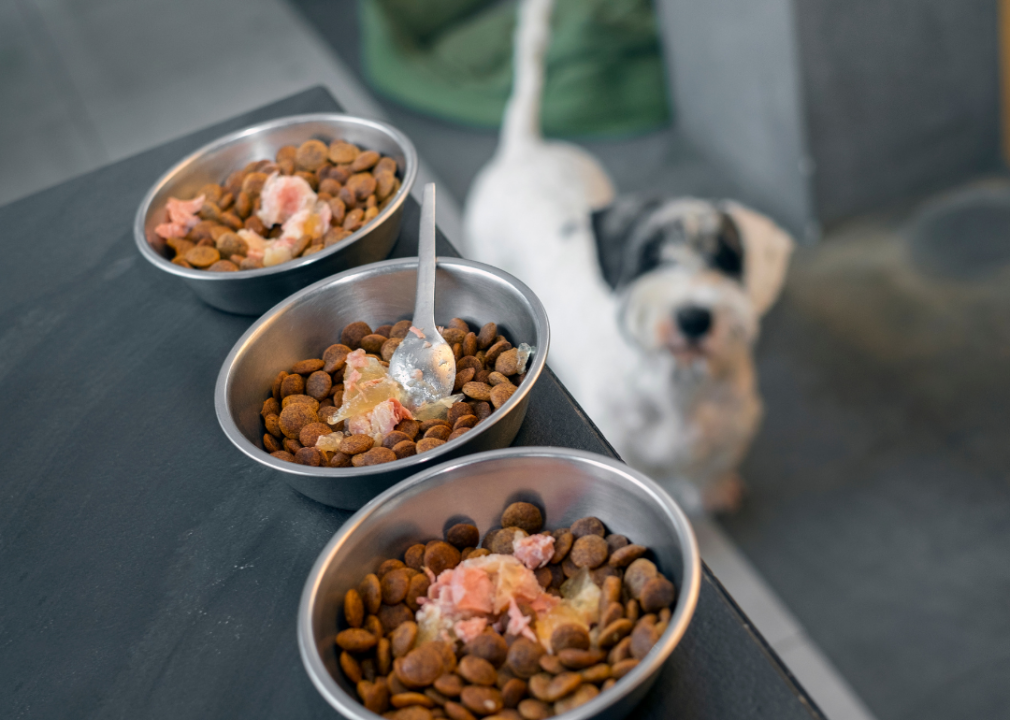 How is it possible for meat meal to be more nutritious than meat? To gain a clear understanding, it’s important to know the difference between the two. Meat used in pet food is usually taken from striated muscles of animal sources. Unless delineated from a specific source, say beef or chicken, food labelled merely as meat can come from cattle, pigs, sheep, or goats.

One of the most common ingredients added into pet food is meat meal, which contains meat that’s been taken through a rendering process to destroy disease-causing bacteria. Through rendering, the meat’s water content is extracted. This results in a more concentrated protein source. When choosing pet food, it’s important to read labels to check out ingredients. As with human food, the main ingredients are listed first. 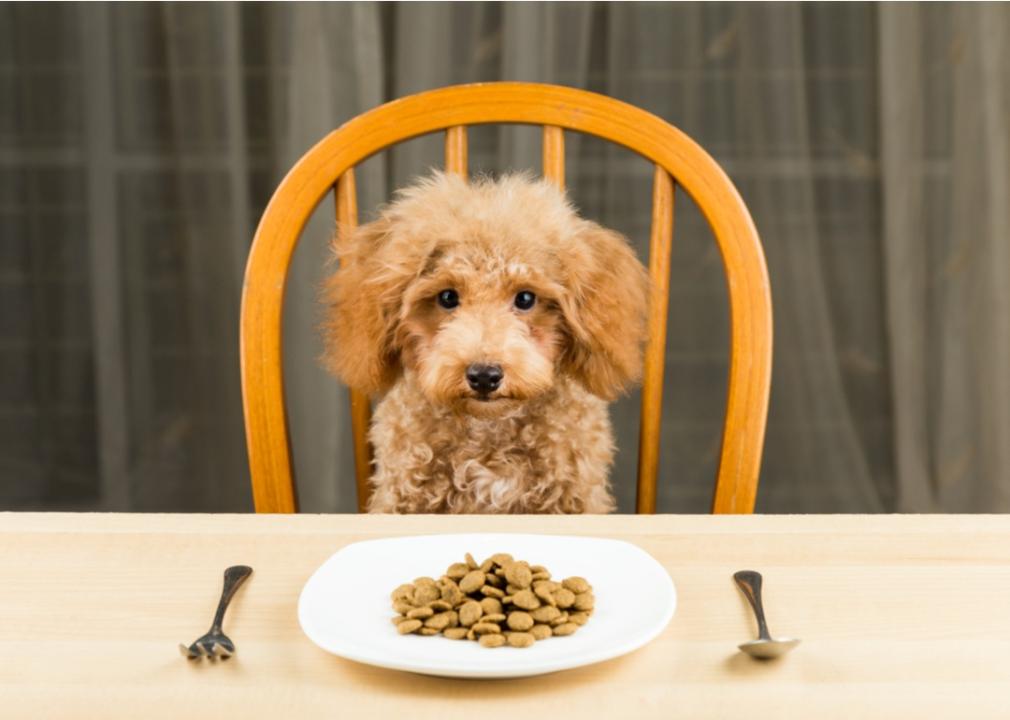 Myth: Kidney failure is caused by too much protein in the diet

Two studies conducted in 1991 were the focus of a Journal of Nutrition report looking at the possible impact of high protein diets on kidney failure in dogs. In the first, researchers found the sole advantage of a reduced protein diet was a reduction in blood urea nitrogen, or BUN. These markers, if high, indicate kidney failure or disease. BUN markers that are too low can indicate liver disease or starvation. Concurrently, it was found that dogs on reduced protein diets faced the disadvantages of reduced glomerular filtration rate, or GFR, and renal plasma flow. The second study showed no significant sign of damage to kidneys over a four-year period. From the studies, they concluded no adverse effects of feeding high protein food to dogs.

An article from the American Kennel Club touched on the debate that’s been brewing for years over whether high-protein diets for dogs with existing kidney disease are harmful. They found researchers agree, noting that “protein sources with high biological value produce fewer waste products and are better choices.” One way problems can come into the picture is when owners feed dogs with healthy kidneys low-protein diets to stave off potential problems. The AKC’s recommendation: “Feed a moderate level of high-quality protein, and your dog will likely be just fine.” 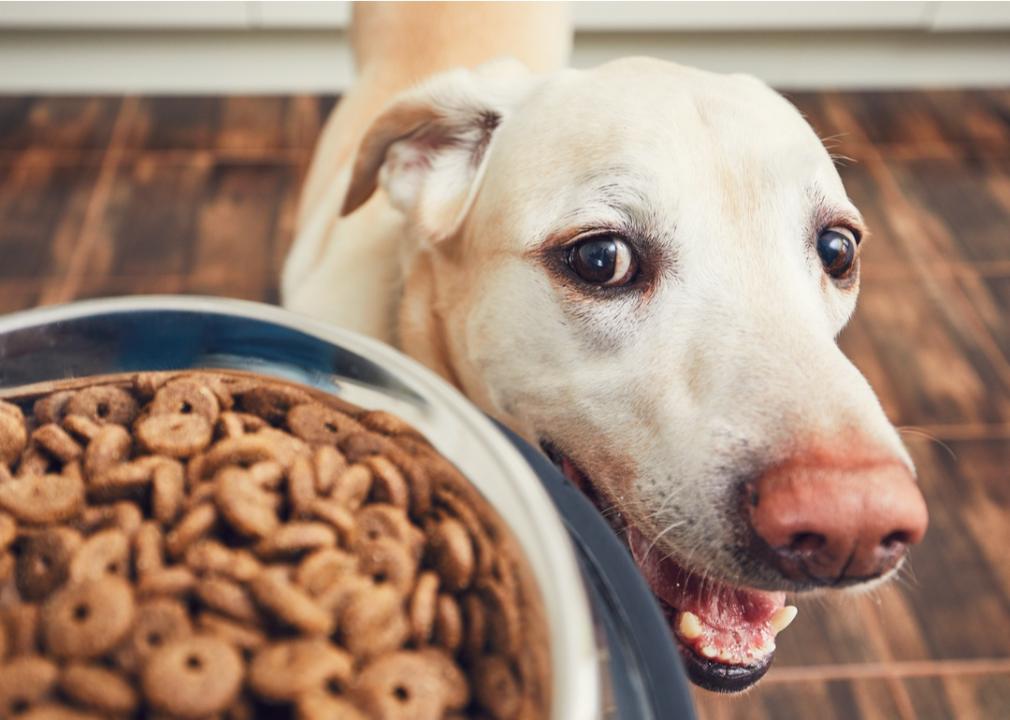 Myth: Food byproduct is the same as food waste

The Association of American Feed Control Officials defines byproducts in pet foods as the excess materials left over after processing human foods; these can include internal organs and entrails. “This doesn’t mean byproducts are unsafe or lack nutrition—they just aren’t part of the original primary products,” the AAFCO notes. An example of a byproduct given is the wheat bran left over from milling flour, an ingredient often used in pet foods.

What may be considered a byproduct in the U.S. could very well be marketed for human consumption in other countries, even considered delicacies. Instead of listing these ingredients—liver, kidney, heart—as byproducts, some U.S. pet food companies list them with the main ingredients. While many people believe byproducts to be hair, hooves, horn, hide trimmings, intestinal contents, manure, or even floor sweepings, this is not the case. Additionally, byproducts can be made into meal through a rendering process. 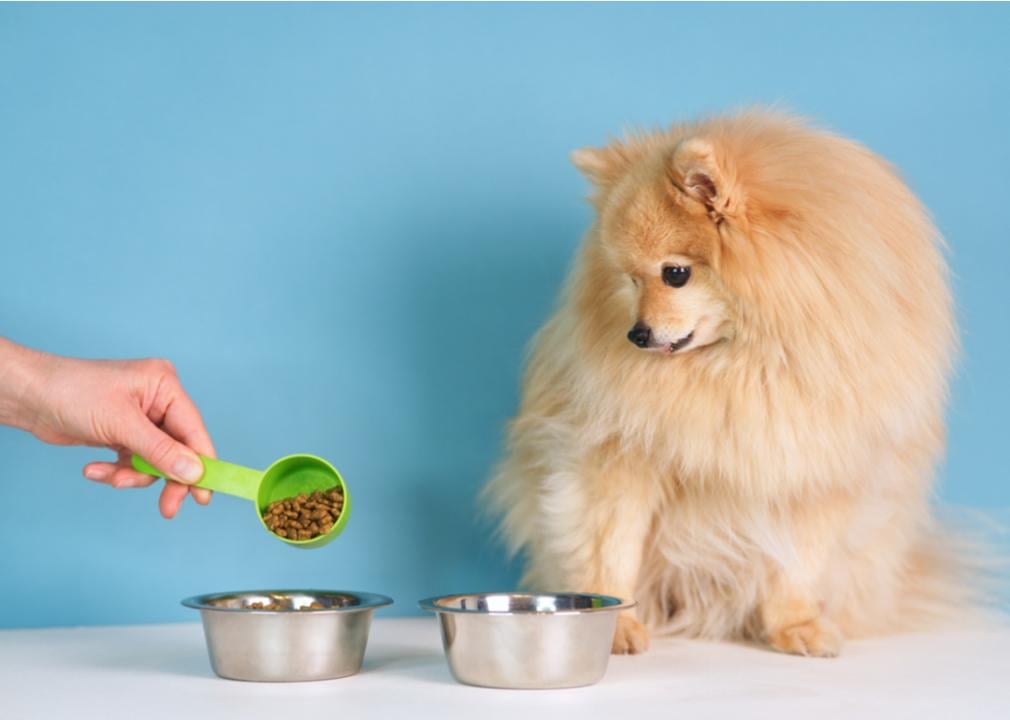 Myth: Grains are bad for pets

It’s false that pets shouldn’t eat grains. See grain-free on pet food labels and you’re likely being exposed to a marketing ploy. The clinical nutrition team of Cummings School of Veterinary Medicine at Tufts University stated on their website that grains are actually beneficial for pets. While many pet owners may consider grains as fillers in pet food, whole grains provide vitamins, minerals, essential fatty acids, and fiber, sometimes even protein. As for refined grains, like rice, they, too, can bring perks to pet diets, including the ability of pets to easily digest them and utilize their nutrients.

So why, then, are grain-free diets not recommended? Though they’re lower in carbohydrates, they can be higher in fat and calories. They may contain highly refined starches in lieu of beneficial grains and grain-free foods that substitute peas, beans, or lentils in their place can result in digestive issues.

What about gluten-free pet food? Research has shown gluten-free products may only benefit Irish Setter dogs with a congenital disease that causes gluten intolerance. 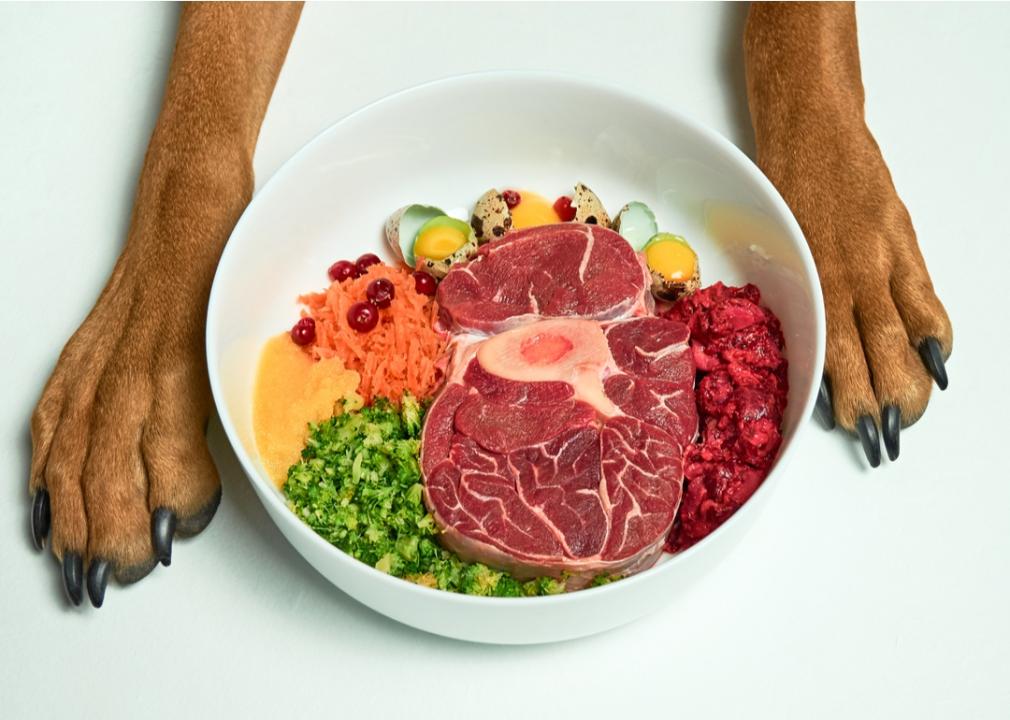 While some may think of dogs as carnivores, they’re actually closer to being omnivores. They thrive on a diet that includes both animal and plant sources. And though dogs are descendants of wolves, the domesticated dog’s diet has evolved over time, with vegetable sources becoming commonplace.

Worried about potential allergies your dog could encounter with eating grains? Tufts University’s Cummings School of Veterinary says these types of food allergies are extremely rare in pets. In fact, they’ve found the digestibility of most plants found in human diets is not vastly different in canines.

Before feeding your dog fruits or vegetables, though, check with your veterinarian. Also, study this list of foods the American Kennel Club says may be harmful to pets, and this list from the American Society for the Prevention of Cruelty to Animals. 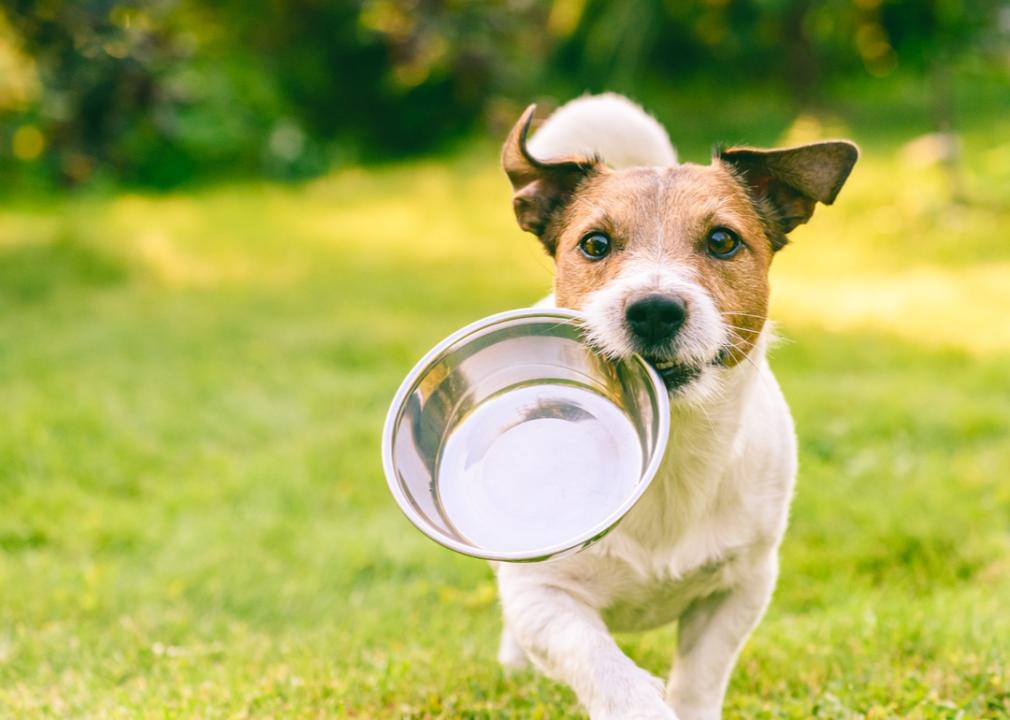 There are several reasons this misconception cropped up. An article from the American Kennel Club shed some light on these issues. One of them is due to owners sharing pork they’ve prepared for themselves. Pork that’s been seasoned with spices and sauces can be harmful to dogs. So, too, can a pork bone that’s been exposed to these spices. Those wanting to safely feed their dog pork shouldn’t share what’s on their own plate with their pet.

Raw pork can also present a danger to pets, as it can cause trichinosis, an infection resulting from the parasite trichinella spiralis larvae. As pork is rich in fat, there’s the possibility of its leading to indigestion or inflammation of the pancreas. Also dangerous for the canine pancreas are processed meats made with pork—think bacon, sausage, ham—and contain carcinogens linked to cancer. The high salt content of these forms of pork can lead to bloat, which is deadly for dogs. Additionally, among food allergies most often suffered by pups are those to rabbits, lamb, and yes, pork.

With all the above taken into consideration, another article from the American Kennel Club, while not disputing the cautions above, put forth this information: Pork is a highly digestible animal protein and an excellent source of amino acids. 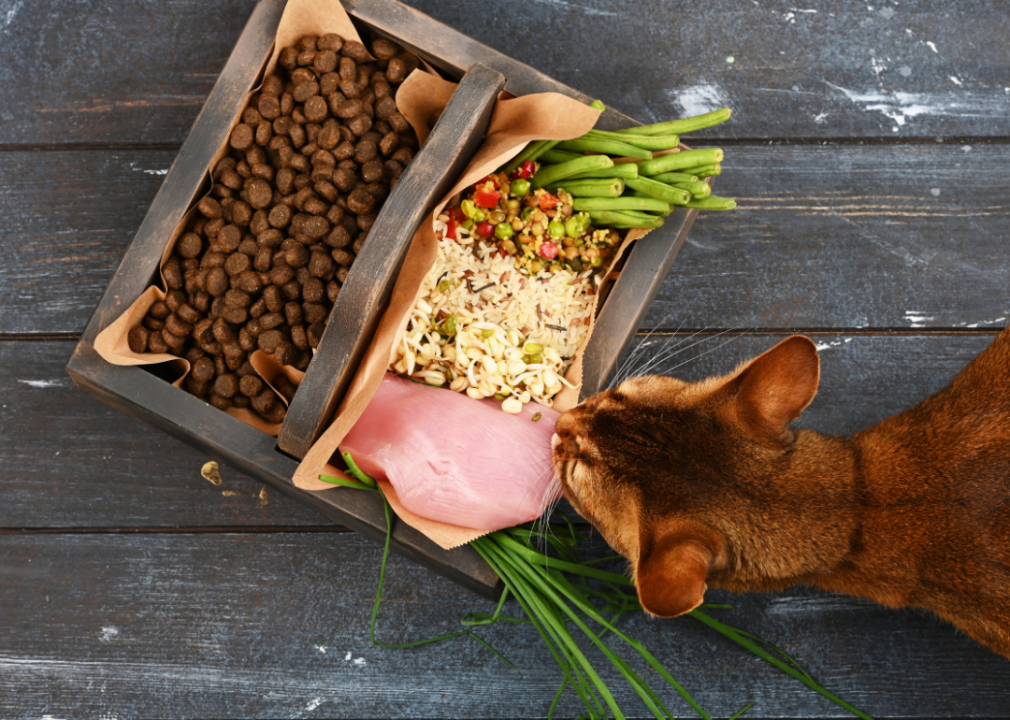 Plain and simple: Cats are obligate carnivores, animals who have difficulty digesting plant-based food sources. Cats require certain nutrients only found in animal proteins, as well as taurine, an amino acid. According to the American Society for the Prevention of Cruelty to Animals, a taurine deficiency can cause health problems for cats including dilated cardiomyopathy, a condition that leads to a weakened heart. It can also lead to eye problems and blindness. Other nutrients necessary for cats found only in meat-sourced protein diets include arachidonic acid, preformed vitamin A, and vitamin B12.

This story originally appeared on ManyPets and was produced and distributed in partnership with Stacker Studio.