Halloween 2022 is starting to look a little more like it did in previous years.

To celebrate the tradition of dressing up for Halloween, Stacker scoured the archives to find 50 photos of Halloween costumes from 1865 to today. The usual suspects pop up throughout the centuries—cats, witches, ghosts, and ghouls—but pop culture references also make an appearance, from Darth Vader to Ronald Reagan. 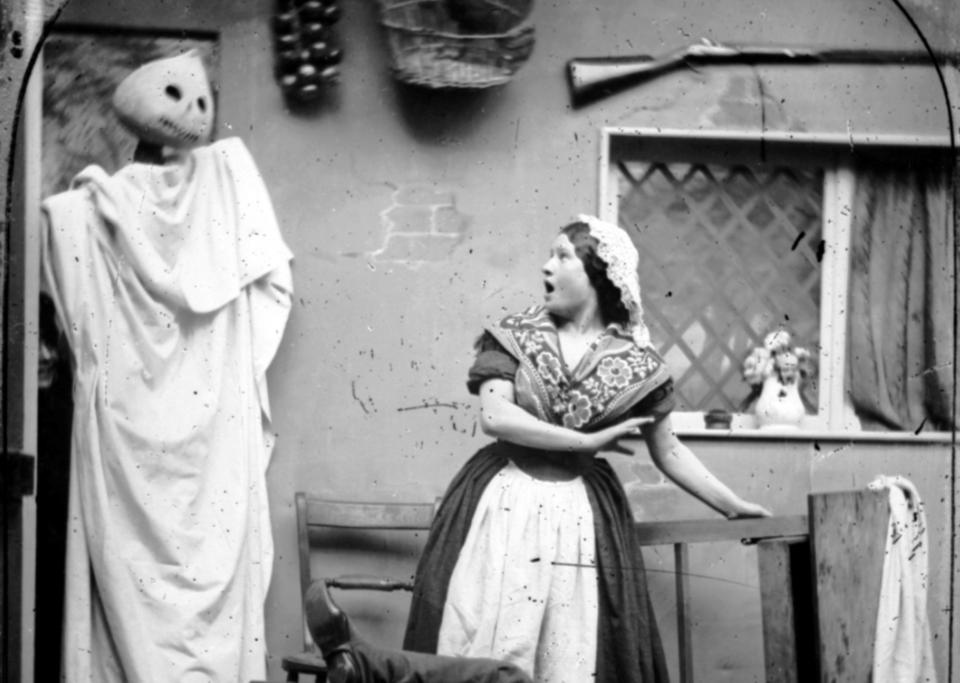 A figure wearing a white cape and a Halloween pumpkin mask takes a person by surprise in their kitchen, circa 1865. 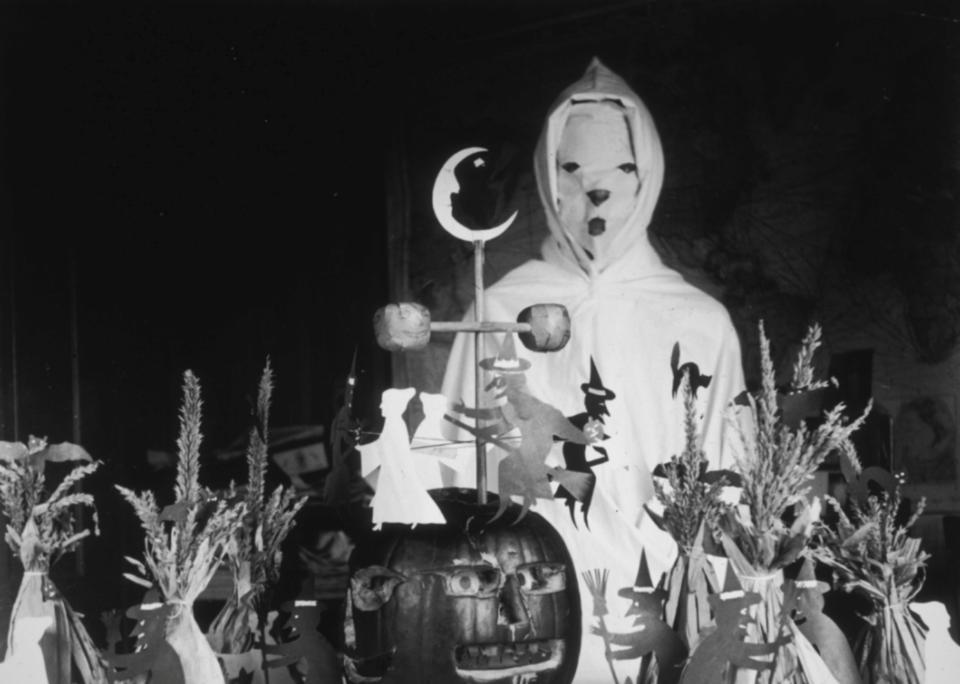 A person wearing a ghost costume behind a table with Halloween decorations in a rural schoolhouse, circa 1905. 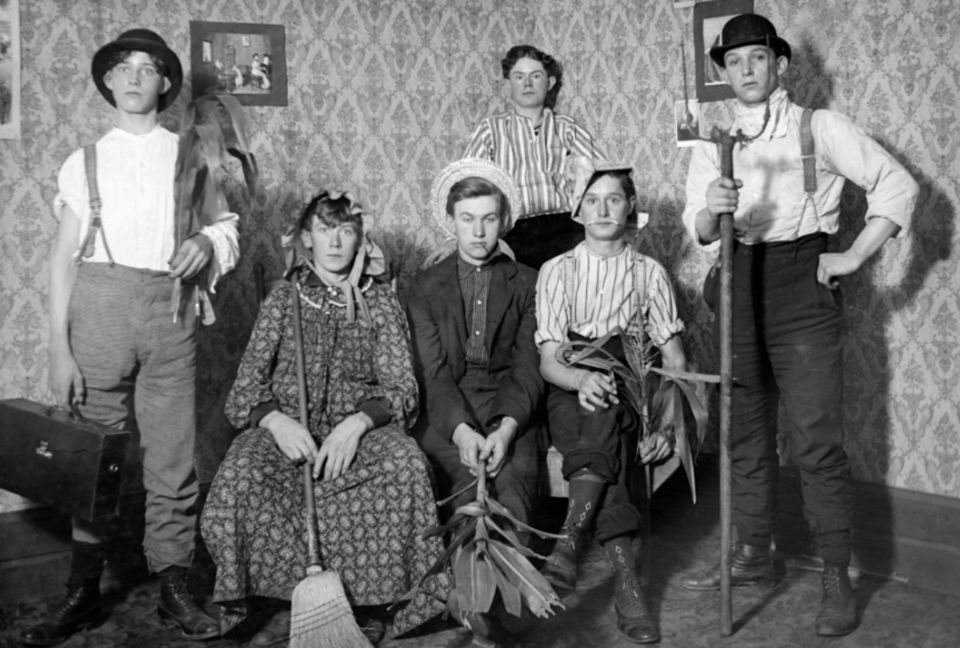 Young men in costumes pose for a group photo at the beginning of the 20th century. 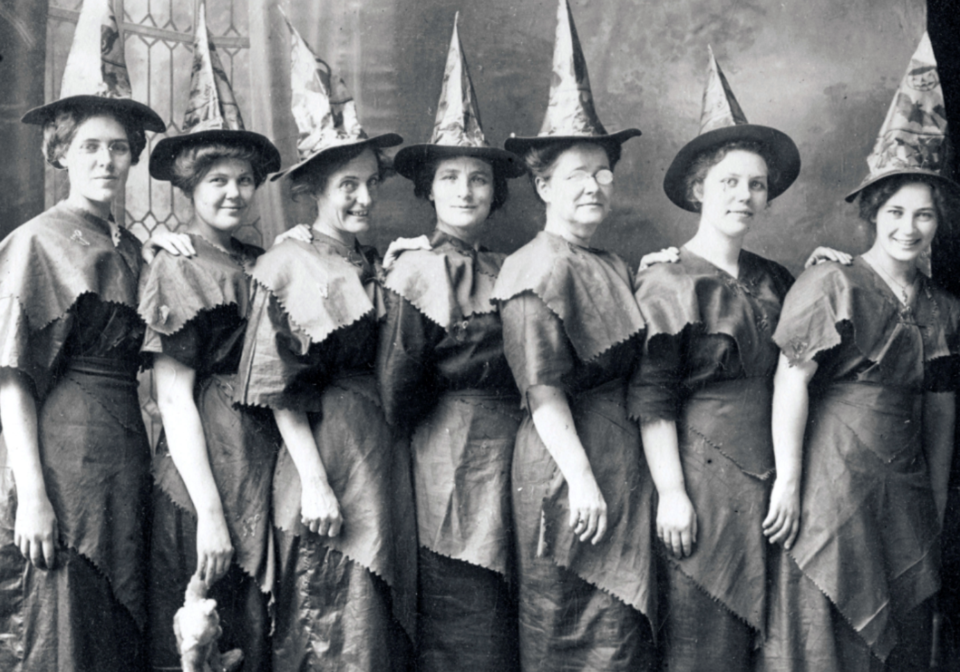 A coven of witches

A group of women costumed as a coven of witches pose for a Halloween photo, circa 1910, in the United States. 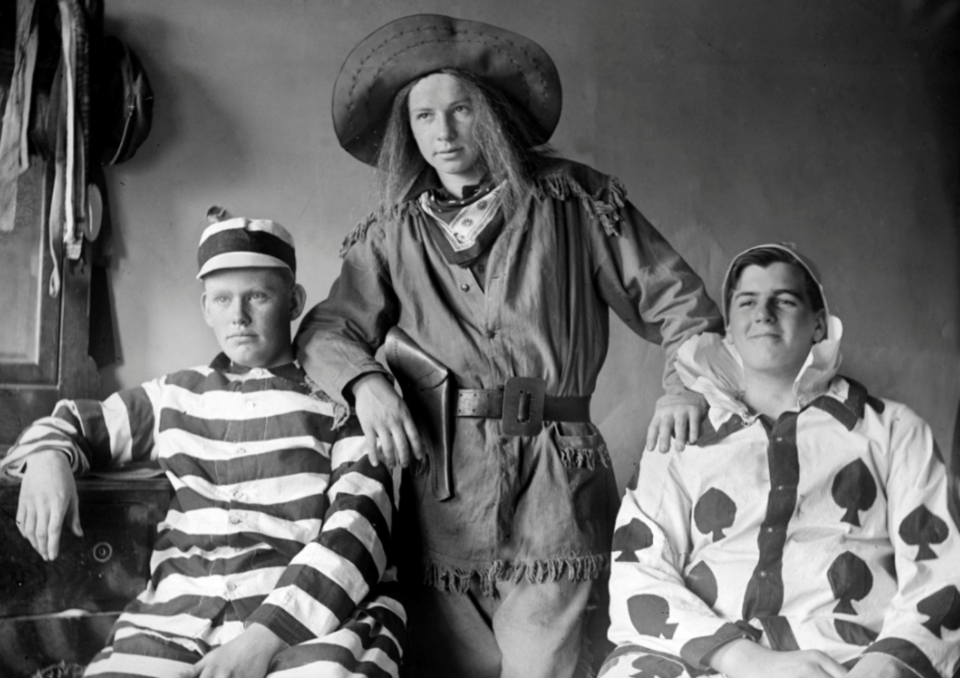 Three young men are dressed up as a jail prisoner, Annie Oakley, and spade playing card. 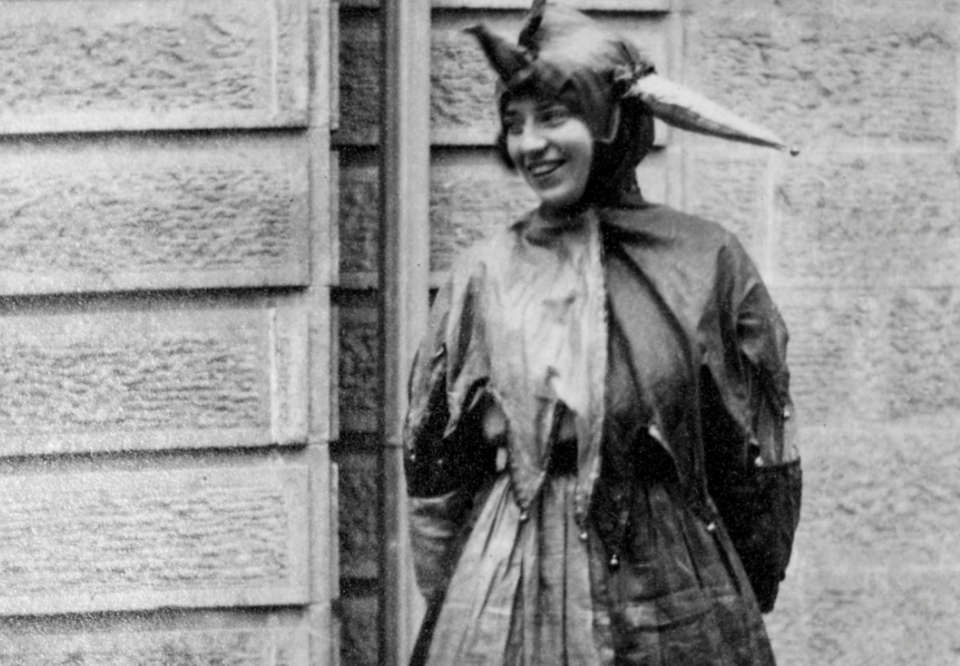 A young woman dressed as an elf for Halloween on the campus of the University of Wisconsin-Madison. 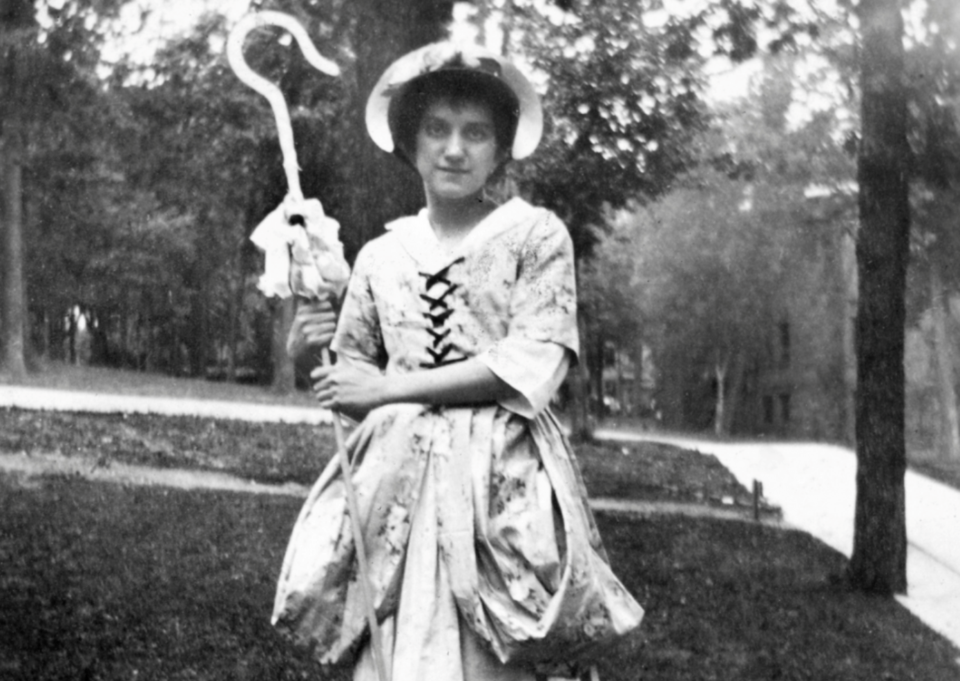 A young woman dressed as Little Bo Peep poses for a Halloween photo on the campus of the University of Wisconsin-Madison. 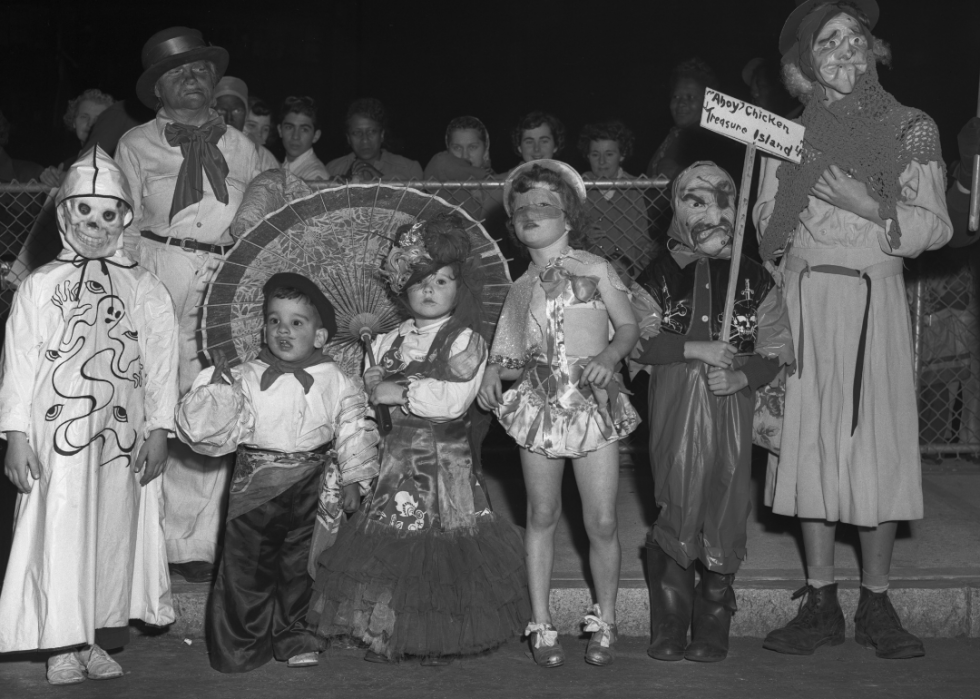 A group of children wear costumes ranging from a skeleton ghost to an angry pirate in an undated photo.

A trio of kids dressed up as ghosts are ready for trick-or-treating, circa 1925.

A young woman dressed as a witch holds a broom on Halloween in the late 1920s or early 1930s.

A portrait of a young woman at a Halloween party dressed in a silk party dress and a pointed hat, circa 1940s.

A group of young children dressed up for Halloween trick or treat in Jersey City, New Jersey, circa 1940s.

Louis Armstrong on stage is frightened by a skeleton during the song "Skeleton in the Closet," from the movie "Pennies from Heaven."

A woman wearing a pirate costume, circa 1940s.

A little girl poses in a fancy outfit holding a paper mache jack-o'-lantern, circa 1945.

American child—and future photojournalist—Robert Abbott Sengstacke (left) poses dressed as a cowboy with other children at a Halloween party, circa late 1940s.

American actress and model Dusty Anderson wearing a Halloween cat costume in the late '40s for a publicity shot.

Children in costumes arriving at a Halloween party, circa 1955. A sign on the door warns "BEWARE GHOSTS ARE WITHIN!"

Sputnik and a Soviet officer

A couple dressed as Sputnik and a Soviet officer attend a party on Oct. 31, 1957, in Los Angeles.

Royalty, a clown, and a cheetah

A knight and her friends

A group of children wearing Halloween costumes wait in a trick-or-treat line to receive apples from an officer at a police precinct, circa 1960.

Mickey Mouse and Felix the Cat

Kirk, 6, and Carey Tressman, 7, wear costumes with reflective tape to keep them safe while trick-or-treating in St. Paul, Minnesota, in 1960.

A scarecrow, jack-o'-lantern, and some friends

A group of children dressed for Halloween stand together on a porch at a house in Cambridge, Massachusetts, on Oct. 21, 1961.

A record player and a ghost

Five-year-old Stephen Knapp, dressed as a record player, and 7-year-old John McNichol, dressed as ghost, ask for contributions to UNICEF along Newbury Street in Boston on Oct. 31, 1974.

Images Of Our Lives // Getty Images

A gypsy, Groucho Marx, and a witch

Four children in Halloween costumes get ready to trick or treat, circa 1975.

Mary Had a Little Lamb

A girl dressed as Mary from "Mary had a Little Lamb" for Halloween, circa 1970s.

Louis Seltvitella as C-3P0 and Jim Webb as Darth Vader walk downstairs at Harvard Square in Cambridge, Massachusetts, on Oct. 31, 1977.

An 11-year-old Kiss fan poses in his Paul Stanley makeup on Halloween 1971.

A chef and Uncle Fester with Thing

A chef with a knife in his head stands near Uncle Fester and Thing from "The Addams Family," circa 1980s.

A young child trick-or-treating in a Spider-Man costume in Suncook, New Hampshire, circa 1980s.

Ghostly phantoms on Halloween Eve, circa 1980, in Salem, Massachusetts.

Children and adults dressed up for Halloween 1985.

Campbell's Cream of Mushroom Soup, Snow White, a ballerina, and a football player

An adult and children dressed in Halloween costumes, Webster Groves, Missouri, circa 1990.

A cat and some ghouls

Children trick-or-treating wearing ghoulish costumes on Halloween in the U.K., circa 1990.

A witch, ghoul, ninja, and pirate

Terry Hartshorn and Sharon Hartshorn pose for a caricature artist in "Where's Waldo" costumes during the Halloween bash to benefit theater company Stopgap in 1996.

Aliyha Alleyne, 3, left, and Kadeem Dixon, 5, dressed as lions from "The Lion King" pose during a costume contest at the Franklin Park Zoo's annual Zoo Howl in Boston on Oct. 31, 1998.

Uncle Sam and Statue of Liberty

Heidi Miller, an officer with the Bloomington, Minnesota, Police Department passes out candy to trick-or-treaters on Oct. 31, 2001, at the Mall of America.

A person dressed up as "Austin Powers'" character Dr. Evil for the Halloween Parade in Manhattan.

Katie Couric dresses up as Donald Trump on the Halloween episode of "The Today Show" at NBC Studios in New York City on Oct. 29, 2004. 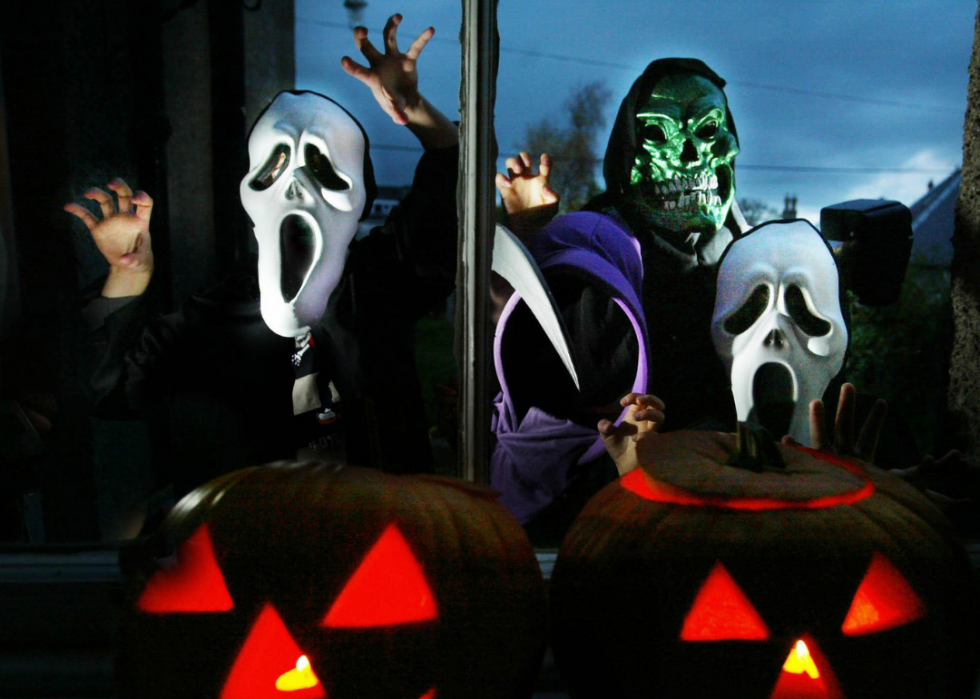 Children in costume look in through a window in Peebles, Scottish Borders, in the U.K. on Oct. 31, 2005.

Rita Ora dresses as Post Malone for the KISS Haunted House Party at the SSE Arena in London on Oct. 26, 2018.

Keep your pumpkins indoors if you live near bears, and other North Shore Halloween tips
Oct 22, 2022 4:30 PM