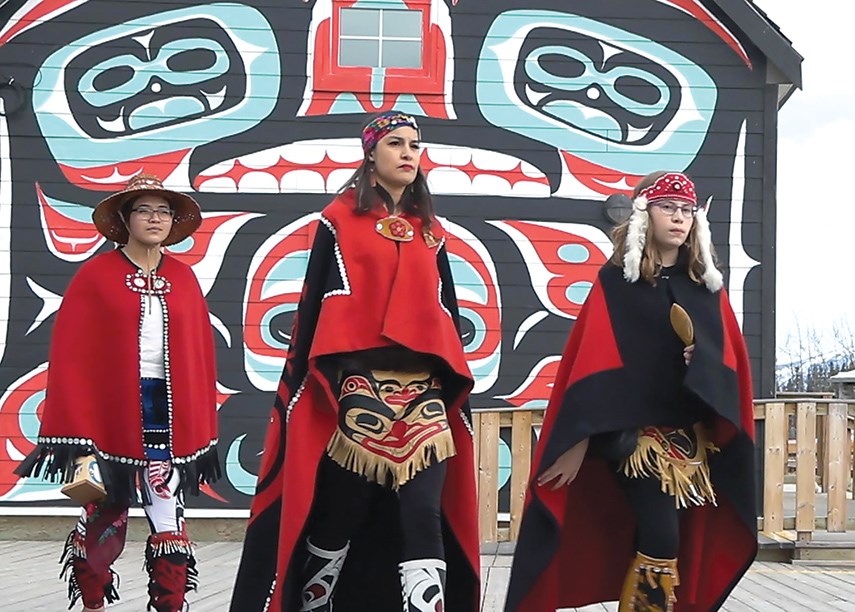 Imagine getting locked up. Then imagine your cellmate asks what you’re in for and you tell him the truth: Dancing.

On Dec. 25, 1921, B.C. Provincial Police officers raided a Kwakwaka’wakw potlatch on Village Island, way up north across the reach from Port McNeill. Dozens of celebrants were arrested, hundreds of ceremonial artifacts were taken and 22 people served terms in Oakalla Prison.

“All for dancing,” Gordon Loverin (Tahltan/Tlingit) laments in his narration for the forthcoming CBC documentary Beyond Human Power.

The movie is meant to feel like fresh air after the attempt to “choke our cultural breath,” Loverin says.

Loverin directed the documentary along with his co-producer, co-writer, and fellow Maplewood resident Pamela Jones.

Living just five doors apart, the duo have commuted in their socks since 2017 when – after the two former colleagues met in their shared parking garage – they turned out a film script selected as a finalist in the 2017 Cannes Screenplay Contest.

Beyond Human Power starts with the aftermath of that infamous Christmas day raid.

It turned out there was “an informer amongst our people,” intones hereditary chief William Cranmer. Cranmer is the descendant Chief Dan Cranmer, who held the potlatch to mark his divorce.

Della Green recalls a relative who was told he could avoid jail time if he gave up his coppers.

“That wasn’t the case. They went to jail anyway,” she says.

We hear about Ottawa’s efforts to eliminate the potlatch and the rationale that the celebration made the Indigenous population impossible to civilize. The documentary also discusses a suppressed report – submitted prior to the raid – that called for a repeal of the potlatch ban.

Potlatches marked births, deaths, weddings. The celebrations became “the essence of who they were,” explains University of Saskatchewan professor Ken Coates.

Coates likens the potlatch ban to impounding Christmas trees or arresting a mall Santa Claus in an effort to eliminate Christmas.

“It just seemed like a natural fit to talk about how dance groups are popping up all over North America,” he says, noting both his daughters are members of Indigenous dance groups.

Following an unsuccessful attempt at “cultural genocide,” traditions that might have been lost are being renewed, Loverin explains.

After getting the go-ahead from CBC and production cash from Vancity, Loverin and Jones grabbed their gear and headed to the Yukon and Alert Bay.

“I encourage anyone to go there and experience the beauty and the power centre of that small island,” Loverin says.

Loverin likens being on Alert Bay to the feeling of change and power you get at the intersection of two great rivers. It’s the place where Indigenous people built communities, he says. The place where they felt grounded and perhaps it’s why they were able to find and embrace their culture again, he says.

Following filming, the duo trucked back to Maplewood with 12 terabytes of footage.

There were accounts of the power of connecting with your culture. One dancer, Gary Sidney Johnson, credits dance with making him who he is today. “It sobered me up. It healed me.”

There is anger in the film as well.

Artist Mike Dangeli emphasizes that “de-colonizing ourselves” is an ongoing process. He talks about being righteously angry, but in the same breath he notes the importance of never losing yourself in that anger.

Another teacher talks about watching her students dance. They look free and happy, and she realizes no one’s ever told them it’s wrong.

“They really spoke from their heart about how dance has affected them,” Jones says. Dance has changed their lives “and in some cases actually saved their lives.”

Their footage documented people and places, colour and movement, but what they didn’t quite see was what they needed the most: the story.

A former broadcaster, Loverin was inclined to tell the story as objectively as
he could.

But it was Jones who realized that the best way to tell the story was through Loverin’s eyes.

“That gave it a more personal and emotional touch to the whole story,” Loverin agrees.

Growing up in Cassiar, Loverin was unsure of how he fit in. As a father, he wanted his children to have a greater sense of identity and pride.

Speaking to the North Shore News, Jones describes feeling “a lot of gratitude.”

“I’m waiting to hear the reaction from the Kwakwaka’wakw and to see if we did them justice,” Loverin says.

The 45-minute documentary offers a chance at a deeper understanding, he explains.

“We’re all here, we’re not going away. We have to find a way to share the land, the resources and our cultural attitudes with each other.”

The documentary airs at 7 p.m. on CBC this Saturday and is also streaming on CBC GEM.