CANINE CONNECTION: Tick talk – time is nigh for summer bloodsuckers

Summertime is fun time, and when you have a dog in your life summer fun can lead to great outdoor adventures and memories.
Jul 13, 2019 8:15 AM By: Joan Klucha 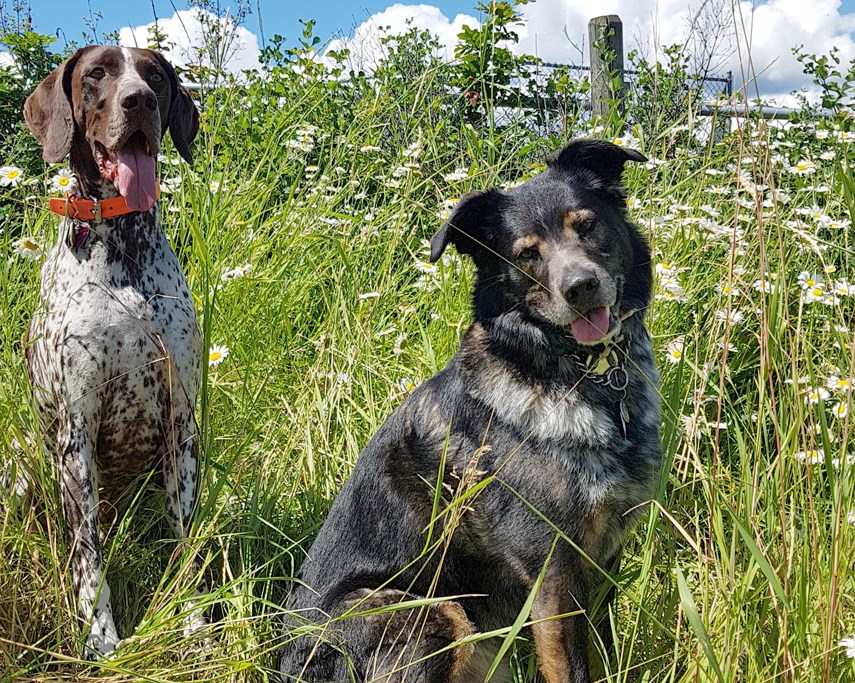 Summertime is fun time, and when you have a dog in your life summer fun can lead to great outdoor adventures and memories.

Rarely do we ever consider potential dangers when enjoying a romp through the tall grass or hiking a trail with our four-legged buddy. But due to our changing climate there are some precautions you need to consider to ensure your dog remains safe and healthy while enjoying the summer weather.

Ticks are creepy tiny bugs with adults about the size of sesame seeds and nymphs the size of poppy seeds. They are mini vampires that feed on blood and live in tall grass and forested areas. As people and dogs pass by they attach themselves to the unsuspecting host by burrowing their heads into the skin to draw their blood meal.

Besides being an icky pest, ticks can potentially carry Lyme disease. According to the B.C. Centre for Disease Control, Lyme disease is caused by a bacterium called Borrelia burgdorferi, which is spread by certain ticks. The bacterium has been found in two species of ticks in B.C.: Ixodes pacificus and Ixodes angustus, also known as western black-legged ticks.

Like all vampires, these particular ticks tend to prefer their blood from rodents or other small animals. But sometimes that tricky tick will bite a human or dog instead of the small animal. Most tick bites do not result in the transmission of the disease, but a small percentage do.

The two species of ticks that carry Lyme disease are found in southwestern B.C., including Vancouver Island, the Gulf Islands, the Sunshine Coast, Greater Vancouver, and the Fraser Valley. They are also present in southern and central BC. But no need to panic, as less that one per cent of ticks tested carry Lyme disease. It is a far greater percentage in the Northwestern United States and Eastern Canada.

Even with the low percentage of Lyme disease present in ticks, some people still choose preventatives such as vaccinating their dog for Lyme disease or using  topical or even oral treatments for repelling ticks. It would be best advised to do some research regarding these treatments as well as having a candid conversation with your veterinarian as some of the treatments have been linked to serious, lifelong side effects.

You also need to learn how to check your dog for ticks. Hot spots are around their ears, mouth and eyes, under their collar, between their legs and toes, in the groin area and around the base of their tail. Basically all the areas that a dogs’ body would come in direct contact with long grass. Be thorough as they are small and can easily be mistaken for a tag wart. Then learn how to safely remove a tick, petmd.com/dog/parasites/how-to-remove-a-tick-from-dog-cat

Vampire bugs aside, there is another threat to your dog’s enjoyment of the great outdoors. It is a seemingly innocuous group of plants called spear grass. Spear grass is a generic term given to wild grasses that have barbed seeds that can be lethal. It’s hard to fathom that a plant could kill your dog but it can, slowly and painfully.

The common names of spear grass plants are needle grass, foxtail, silver spike grass and porcupine grass. Google them to become familiar with their appearance. Foxtail grass is a common sight on the island as well as the Interior.

Their graceful feathery fronds billow attractively in the breeze but they have a deadly medieval secret as their spiky seeds attach to your dog’s fur. Much like porcupine quills, their design forces them to move forward, piercing your dog’s skin and migrating through the body causing tremendous pain and internal damage. They are very hard to remove and have been found in dog’s eyes and internal organs, which has led to death.

You must be vigilant and check your dog along walks through grassy areas and remove the barbs immediately. They tend to be located on your dog’s body in the same areas as ticks but toes and ears are most common. If you see your dog shaking their head, scratching or chewing at their feet or tail, stop and check them out immediately.

Our changing climate is forcing us to change and we must take precautions when venturing into the great outdoors. But don’t let those precautions deter you because life is best lived outdoors and to quote John Muir,  “One touch of nature makes the whole world kin.”