CANINE CONNECTION: Paws in the air! Now back away from the pizza 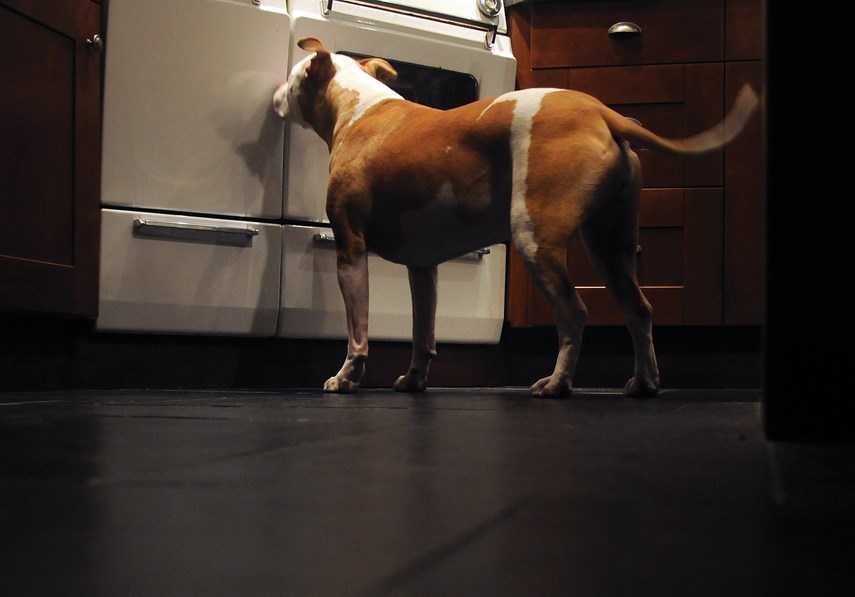 One of the many life lessons we humans learn from dogs is how to be proactive and responsible . . . well for most of us anyway.

As an example, after repeatedly having to clean up after their dog or rush them off to the vet, most dog owners figure out that it’s simply easier to prevent their dog from getting into the garbage by placing said garbage in the outside bin.

No need to get a trainer to come and figure out why Fido keeps getting into the garbage. Fido is not suffering from some latent abuse around garbage, he is just tempted by the smell of garbage.

With the temptation gone, the desire soon diminishes. This is basically the law of diminishing returns.

If your dog is big enough – or a puppy who’s going to be big enough – to steal your pizza off the kitchen counter you need to be aware of this. Your question should not be, “How do I get my dog to stop surfing the counter?” but rather “How can I learn to be more proactive so that I do not trigger the primitive part of my dogs brain that is designed for scavenging.”

You start this proactive lifestyle training by keeping your counters and tables clean of crumbs, food, grocery bags, plates, etc.

Don’t even allow your dog to entertain the thought that food can be found on countertops and tables by leaving that temptation around for their noses to investigate.

The sooner you can adopt the habit of keeping a tidy kitchen, the better chance you have of preventing the habit of scavenging by your dog.

This would also include keeping food off the floors, which means not entertaining the five-second dog rule. The rule is that any food that falls to the floor is fair game for the dog.

This would be fine if it was a familiar dog treat that always fell to the floor but if it is a food that can cause a dog to become ill, such as raw onion or chocolate, you could be setting yourself up for a trip to the veterinarian and also creating a unhealthy game of: ‘Who can get to the human food on the floor first.’ This can potentially manifest in a host of unwanted behavioural issues that usually involve the display of aggression.

One of my favourite proactive training routines is to teach a dog to go to a spot and stay there.

It is basically a down/stay but on a designated spot, such as a throw rug. Once a dog learns to remain in a stay on the rug, then that rug can be moved around the house, even into the kitchen or dinning room.

The command to “go to your spot” is given and the dog responds by lying on its rug and not moving from it.

The dog is then out from underfoot, but still close enough to feel like it is part of the family dynamic. Leadership is introduced by setting up a fair yet consistent boundary for the dog to live within and the dog stays out of trouble. It’s a win-win for everyone.

But what if it’s too late and Fido has already made off with the Sunday dinner roast? Well not to fret, it’s never too late to begin to be proactive.

But you still have to learn how to keep counters and tables free from food and develop eyes at the back of your head.

Begin training by using the sit for everything game as the default behaviour; meaning it’s time to teach Fido that being in the kitchen is a privilege not a right. In doing so it must sit when in the kitchen. You would also be teaching the dog to “go to your rug (spot).”

When you combine leadership training by setting boundaries with being proactive, the law of diminishing return applies.

The dog is no longer self rewarding for stealing food off the table but is rewarded for laying or sitting in its spot.

Given the choice a dog will choose the behaviour that gets the biggest return for its efforts.