Socializing your puppy through their early stages of development and into their adolescence is the best way to create a confident and friendly adult dog.
Mar 4, 2020 5:47 PM By: Joan Klucha 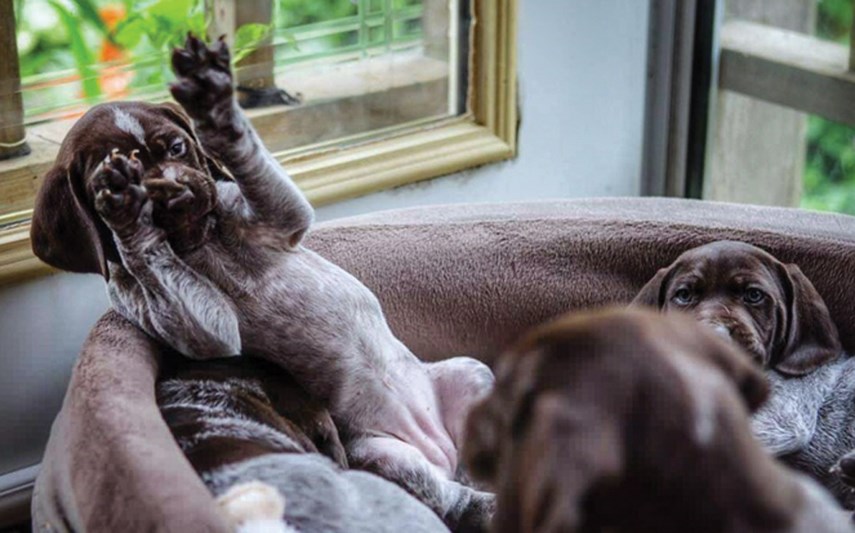 Socializing your puppy through their early stages of development and into their adolescence is the best way to create a confident and friendly adult dog.

The goal of socialization is to systematically expose a young dog to a variety of people, dogs, noises, smells and situations in a positive manner.

By positively acclimating your pup to all types of stimuli it can help prevent an adult dog from being reactive and fearful toward children, people wearing hats or the act of riding in a vehicle, for example.

As the dog matures, these positive experiences help to permanently shape the pup’s temperament and personality resulting in how the pup reacts to his environment as an adult dog.

If a dog is properly socialized, it is not only a social dog that is comfortable, confident and capable of self-control by being nonreactive in whatever situation it finds itself in, but it is also a dog that does not feel the need to interact with its surroundings and considers its person as the priority over its surroundings.

But wait, isn’t the goal of socializing a dog to create a dog that is sociable and wanting to interact with its surroundings?

Socialization is meant to create confidence so that a dog does not need to react to, or interact with, everything it sees. A socialized dog remains calm and focused on its person. Yet when allowed to interact, the dog does so in a calm and collected manner.

In fact, a dog that over-reacts every time it sees a dog or a person is not a social dog at all. It can actually be considered an antisocial dog because it is easily triggered by the sight of another dog or person resulting in the dog becoming overly stimulated and losing self-control.

But how does that happen if a new puppy owner has made a concerted effort to positively allow the puppy to greet every dog and person it sees?

It happens when a new puppy owner neglects to provide leadership and allows the pup to have unstructured and uncontrolled interactions with every new person or dog that they see. This lack of proper guidance is what creates an antisocial, reactive dog with little self-control that gets over-stimulated in new environments.

We all know how important it is to expose a new puppy to as many positive experiences as possible but it is equally important that any greetings, be it with other dogs or people, are not allowed when the pup is overly excited but instead is calm in both body and mind.

To achieve that you have to patiently wait for and then reward the calm behaviour, not the overly excited behaviour.

By patiently waiting for your pup to physically calm down and give their attention to you instead of to the approaching distraction, you are shaping the dog’s behaviour and teaching it self-control. A dog that sees you as their priority, not the approaching distraction, is a dog that is social within its environment without having to interact with it.

Sure, it’s cute to see a young dog get excited as it sees someone or another dog approaching but that excitement will eventually result in an adult dog pulling its person down the street or barking at the dog as it approaches. The young dog’s behaviour will continue to unravel as it has temper tantrums when it is not allowed to do as it pleases and greet whomever it wants. It will also become a dog that views everything other than its person as the priority. If allowed to continue this disconnected attitude inevitably leads to an increase in excitement to the point where the dog is now hyper-reactive to each and every passerby on the street and the goal of socializing the pup has instead turned into a lesson in antisocial behaviour.

Seeking a calm state of mind and controlled behaviour should be the foundation of your pup’s socialization efforts. A dog that looks for guidance, asks permission and prefers its person over its environment is a well-socialized dog, confident and friendly dog.